Ivan, Jennifer and I checked out of the Heeren Inn on April 27, 2009. We had breakfast at the Voyage Cafe.  We got a taxi to the bus station.  We left on the 12 pm bus heading to Singapore.  The bus ride should take about 4 hours.  It took over 4 1/2 hours since we had to stop at customs twice.

We hopped into a taxi.  We checked in at The Mitraa Backpackers Hostel.  The hostel is located in Little India.  The hostel has shared bathrooms.  You have to pay a S$1 to rent a towel or a blanket. You also have to pay to use a power adaptor which we all thought was a bit ridiculous.  We chilled in the hostel for awhile.

Everybody wanted to get something to eat for dinner.  Ivan suggested we eat at Komala’s which is a vegetarian Indian fast food place.  Since we’re in Little India, most of the food is Indian, and this place came recommended by the staff in the Hostel, who were Indian too, so probably know what they are talking about when it comes to advice on Indian Restaurants! 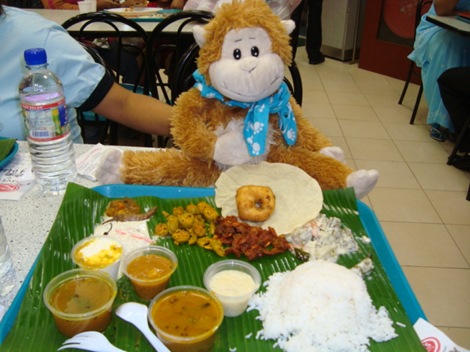 Ivan and Jennifer both ordered a South Indian thali.  It was a series of curries and various condiments served with rice on a banana leaf. I had a banana naan with two dips.  The food was really spicy.  Jennifer didn’t like the thali too much, as it was very different to the sort of Indian food she had eaten in the past. Ivan pointed out that this was more traditional Indian food – you dont usually get thalis in Indian restaurants in England or America. However in India itself thalis are very popular, while the curry-rice-naan English style Indian meal is not so common.  Jennifer ordered a masala dosa.  She enjoyed the dosa. 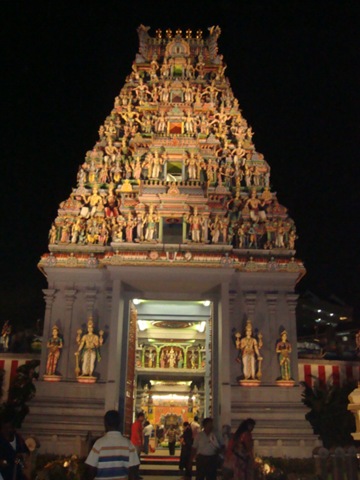 We walked around Little India.  We walked back to the hostel to get some sleep.

We had lunch at Komala’s on April 28, 2009.  Ivan and Jen both ordered a uttapahm.  It’s a traditional Indian dish. 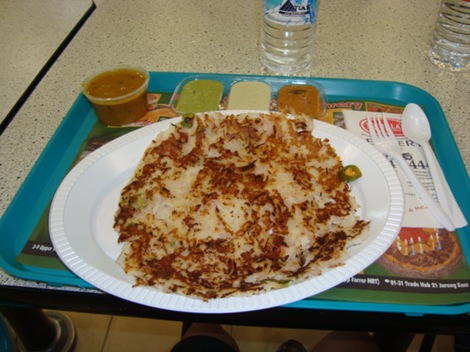 It’s like a hash brown except it has peppers and onions as well.  I had a banana naan again.  The food was tasty again.

We went shopping at a mall called Plaza Singapura. 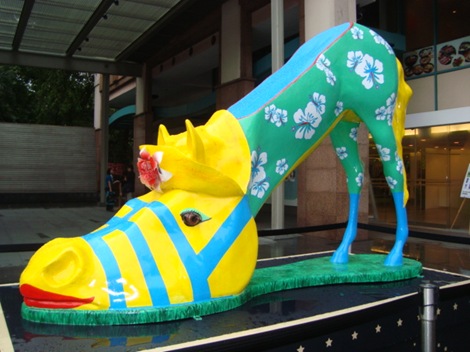 They have two great Horseshoe statues outside.  We saw the movie 17 Again.  It was good.

We took a taxi headed to Clarke Quay.  It’s an area right by the river that has lots of fancy restaurants and bars. All the bars have happy hours which make the drink prices kinda reasonable – but outside of happy hours the drinks are more expensive than London! We walked around to check out all the restaurants.  Ivan and I went on the Singapore River Cruise.  It was really nice. 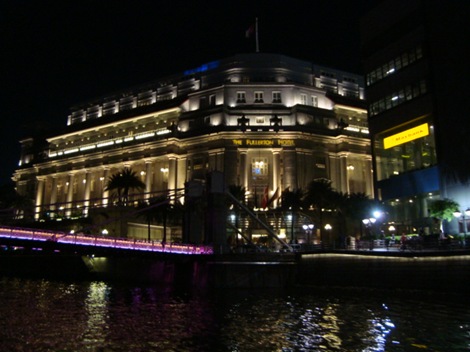 We saw different things like the Singapore Flyer (similar to the London Eye), Merlion and the Fullerton Hotel.

We had dinner at Cuba Libre.  Ivan and Jennifer had garlic breadsticks.

Ivan got a salmon dish with potato wedges.  Jennifer ordered the pollo mojito.  I had a banana and chicken kebab.  The food was really good.  Ivan and Jennifer ordered some yummy mojitos.  They ordered different flavors.  Ivan asked if the happy hour 2 for 1 would apply to the mojitos.  The server said yes.  Later on, they tried to order more mojitos. 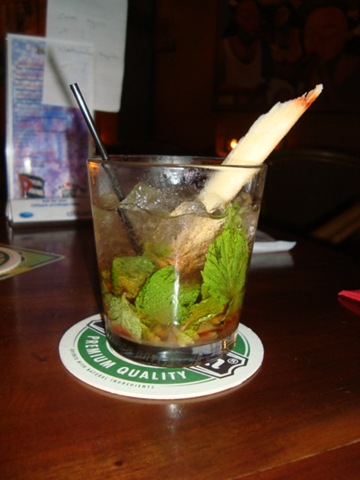 But, the other server said it had to be the same drink.  We said that the other server told us that we could have two different mojitos for the happy hour special.  The manager came over and explained it to Ivan and Jen.  They explained that the server said it was fine.  They didn’t understand why it couldn’t be 2 for 1 when they were both mojitos and the same price.  The manager said it would be fine this time.  Ivan decided to cancel the order since they would probably make the drinks weak.  The drinks came a few minutes later.  The server said that they were on the house.  Anyway, the watermelon mojito was the best one.  The drinks didn’t taste as strong just like Ivan thought.

Ivan wanted to walk back to the hostel, so that we would all feel less guilty about eating so much food that evening.  It was about 3 miles.  We reached the hostel and wanted to get to bed.