Ivan, Jennifer and I ate the free breakfast on February 18, 2009 at Casa Escano.  Ivan had the oatmeal.  I had the hot banana oatmeal.  Jennifer had scrambled eggs with rice.  We had to check out of Casa Escano because even though they had told us they had an extra night available, it turns out they didnt. We walked across the street to Paragon Suites.  We decided to check in there.

Ivan wanted to get a haircut.  We were going to head to another mall called SM City.  Right away, we went to a salon.  We stopped at the Ricky Reyes salon.  Jennifer got a hair spa and a haircut at a Ricky Reyes salon in Manila.  Ivan sat down to get a haircut.  His haircut only cost 200 Pesos.  Jennifer was getting her hair dyed black.  Ivan prefers her with dark hair.  Jennifer also thought her hair was losing its color and turning more orange.  Jennifer’s hair color cost 1000 Pesos.  The lady who was dying her hair was really nice.  Jennifer said that anything close to her natural hair color would be fine.  The lady picked Natural Black.  It turned out nice.  It’s really darker than her hair color.  I think her hair is actually a really dark brown.

We went searching for bookstores.  Ivan left his Lonely Planet at Banwa Pension.  So, he was trying to find a new Lonely Planet Philippines.  He wasn’t having any luck at all. He tried several large bookstores, and they had Lonely Planets for every single country in the world…..except for the Philippines!!  He heard another Philippines guide book that was good.  He bought the Philippines Travel Guide by Jens Peter.  The author used to work for Lonely Planet.  Ivan also picked up some James Patterson books.

We checked out the movie theatre to see what was playing.  We went to see Confessions of a Shopaholic.  The movie was funny.  It was definitely a chick flick.  I prefer funny monkey flicks.  The movie was a little cheesy.

We grabbed a taxi back to Paragon Suites.  We stayed in the hotel for a while just chilling.

Ivan read in his new guide book about Crossroads.  It’s an area with restaurants, a club and bars.  We got into a taxi, and  asked the driver to take us to Crossroads.  We figured we could find a nice restaurant when we arrived.  We checked out a Japanese restaurant.  But, we saw a shabu shabu restaurant next door.

We went inside China Royale.  It’s a restaurant for shabu shabu.  Shabu Shabu is where you cook up ingredients in a big pot of soup.   Ivan and Jennifer picked chicken, tofu, crab balls, salmon balls and button mushrooms.  The soup they picked was a chicken broth.  The restaurant also gives you garlic, peppers and spring onions.  Then, there’s three sauces:  soy sauce, chili sauce and teriyak sauce. 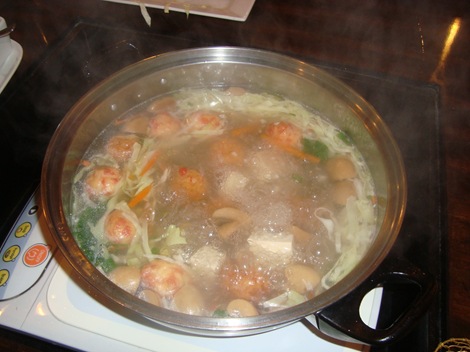 We mixed in the ingredients and let them cook.  We had a man helping us out.  Ivan and Jennifer ordered a bottle of Merlot.  I had a banana shake.   Once the food was done, we’d scoop it into our soup bowls.  I added a generous amount of bananas to my soup.  It tasted so delicious! 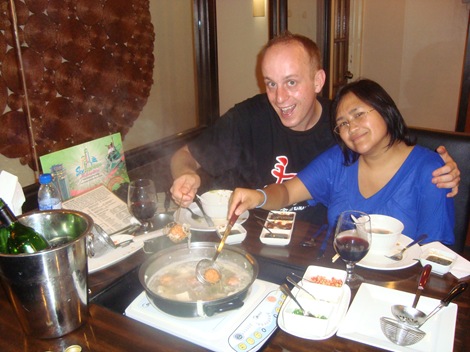 It’s fun cooking the shabu shabu.  We had a great meal at China Royale.

There was a karaoke place in Crossroads.  But, Ivan wanted to pick a place closer to our hotel.  He noticed the day before there was one that had LCD screens.  We took a taxi to Soft Hits! Karaoke.  On the door, there was a sign saying it was a soft opening.  We got a private room.  The remote lets you pick the songs by artist or title.  It’s really easy to use. 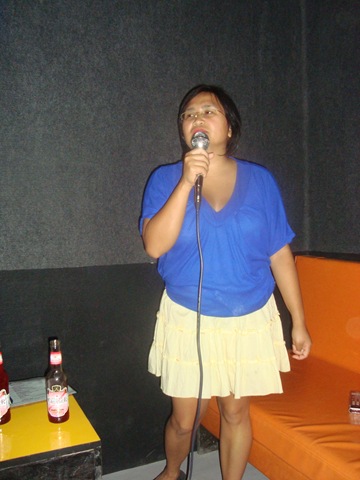 Ivan and Jennifer ordered a vodka cooler.  I got a banana and strawberry juice.  Ivan and Jen sang so many songs.  They really love to sing. 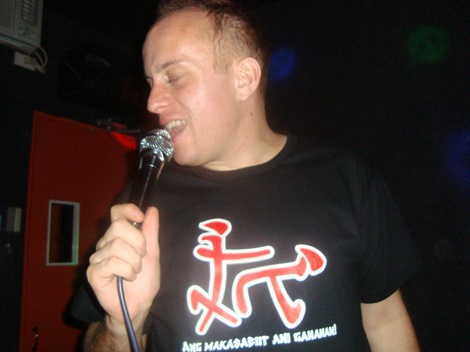 I was bouncing around on the couches.  The room has disco lights.  So, there were red, blue and green circles going around the room.  It was a really fun time.