Ivan, Jennifer and I woke up on the train on January 6, 2009.  The train was supposed to arrive at 8:25 am.  The train actually arrived about 3 hours later.  No problem for me though – that’s 3 more hours of monkey napping.

We hopped in a tuk-tuk with another couple inside.  The driver took us to a travel agency.  He said we could get our visas there.  We said we would get our visas at the border.  He said that the police would get us if they stopped us since we didn’t have a visa, but we knew he was lying, and just wanted us to buy the expensive visas from the office rather than from the official place at the border.  He took us to the border.  We went through the Thailand immigration first.  We then hopped on a bus.  It took us over a long bridge called the Friendship Bridge. Then, we had to fill out forms for the Laos visa.  We filled out the forms fast since more people kept coming.  It cost us 35 USD.

We then took a tuk-tuk into Vientiane, Laos.  We asked to be driven to the Inter City Hotel, which I had picked after reading about it in my ‘Lonely Monkey’ book.  The book described it as ‘a boutique hotel, perfect for little monkeys’.

The lobby was amazing with lots of cool art. 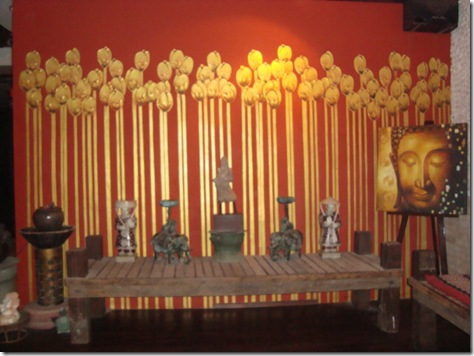 They told us the room would be ready in 10 minutes.  We went to the hotel restaurant called Inter Stone House for lunch.  Ivan got the french onion soup to start off with.  I got the sizzling banana and honey dish.  Both Ivan and Jennifer got the sizzling chicken dish.  The food was simply delicious!  We checked into the hotel.  The rooms were clean, but decorated quite plainly.

We walked around town.  We stopped by the Joma Bakery Cafe.  Ivan and Jennifer got tea.  I had a tasty banana juice.  Ivan and Jen shared a brownie.  Most of the ATMs in Vientiane only let you take out a maximum of 700,000 Kip out at a time, which might sound like a lot of money – but its only about 80 dollars.  Ivan found out there was a bank a few minutes away.  We walked to the bank.  Unfortunately, they were closed for the day.  One of ladies said there was an exchange place nearby.  Ivan didn’t have his passport, which was needed – so we headed back to the hotel.

Ivan and I went to the Sunset Bar to see the sunset.  Jennifer was tired and stayed in the room.  It was a pretty sunset. 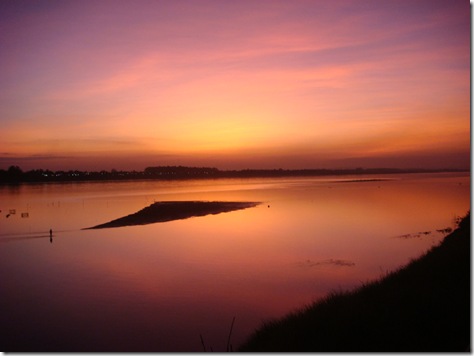 We went to Douang Deuane for dinner.  The service was extremely slow.  Ivan and Jen started off with a papaya salad.  The papaya slices were hard – so the salad didn’t tasted good.  Ivan ordered the fish laap and Jennifer got the chicken laap.  I decided to get a banana and vegetable noodle dish.  The food took about 30 minutes to arrive.  Ivan and Jennifer thought the laap dishes were very plain and tasted bad.  My dish was okay.  Ivan and Jennifer were still hungry after the bad dinner.  So, we walked to the Joma Bakery Cafe.  Ivan and Jennifer shared a tuna sandwich on a bagel.  We walked back to the hotel.  We watched part of the movie Ghost Town before going to sleep.

We went to have the free breakfast at the hotel on January 7, 2009.  It was pretty minimal with meats, bread and eggs.  I’m glad that I had a few bananas left.  We packed everything up and checked out of the Inter City Hotel.

We walked to the La Central for lunch.  It’s a French restaurant that’s recommended in Lonely Planet.  I got the banana and fish in a tomato sauce.  Ivan ordered the tuna steak.  Jennifer had the shrimp ravioli with green peppers in a bullion.  Our entrees tasted wonderful. 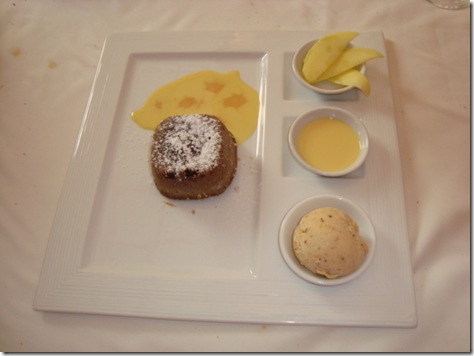 Ivan and Jennifer shared a delicious chocolate fondant with ice cream and apples.  The food is fantastic at La Central.

It was nice to meet some new friends.

I worked on a blog post with Jennifer in the room.  Ivan entertained Isaac with a bunch of magic tricks.  Isaac was quite amazed at his tricks!  Isaac made Ivan and Jennifer a great drink with Absinthe.  I drank a nice banana & strawberry juice.

Isaac, Ivan, Jennifer and I hopped into a tuk-tuk.  We met Valerie at Makphet for dinner.  Isaac and Valerie ordered a few things as did Ivan and Jennifer.  They all shared everything.  The dishes were all different with fish, chicken and vegetables.  I had a big banana pancake especially ordered just for me.  It was a good meal with some great conversations.

Everybody wanted to go to a bar afterwards.  Isaac and Valerie ran into their friend Yun.  She knew of a good bar near by.  We walked to Bor Pen Nyang.  It was a bar on the top floor of the building.  There was loud rock music playing.  We all ordered drinks.  I got a banana shake – no alcohol unfortunately.  Ivan performed a magic trick with Yun.  It baffled everybody especially Isaac.  He did a few more drinks.  The music was a little too loud so it was hard to hear.  Ivan wouldn’t reveal any of his magic tricks.  We headed back to Isaac and Valerie’s.  It was a fun night out!