Ivan, Jennifer and I woke up on January 4, 2009.  We had free breakfast in the hotel.  Ivan and I went shopping in the markets by the hotel.  Jennifer stayed in the room and watched tv.  We went up the roof and sat by the pool.  Ivan and Jennifer were reading magazines.  I soaked up the sun.

Later, we got ready for a night out.  I had a banana sandwich for dinner.  We took a taxicab to Bed Supperclub.  It’s a restaurant where you dine on big cushions.  It’s nice to lounge since it feels like you’re laying in bed. 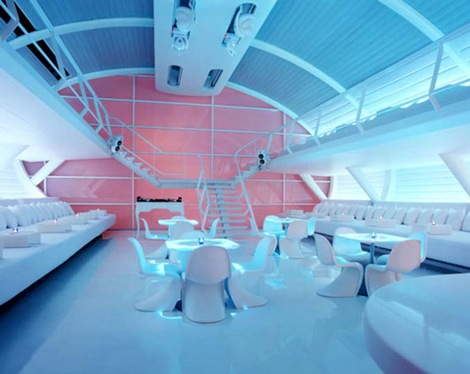 There was a set menu and Ivan and Jennifer decided to share.  The first item was a tomato soup with noodles.  It was a tasty soup.  The main course was kingfish with a spicy salad.  The salad was much better than the fish.  But, the fish was decent.  There was nice chill music playing.  Ivan and Jen were enjoying the delicious drinks.  I had a mocktail called Banana Bang.  It was yummy!  During dinner, there was a show with Tina Turner.  They waited awhile before having dessert.   The dessert came.  It was a rich chocolate fondant with ice cream.  It was pretty good.  Dinner turned out to be wonderful.

We walked to the other area.  The music was house music.  The area had an upstairs area with a balcony.  There was a big screen playing the tv show Futurama.  Another show came on with a Michael Jackson impersonator.  We all danced for a few hours.  It was really fun.  Ivan and Jennifer liked the drinks.  We were happy to find a great place to dance in.

We woke up late on January 5, 2009.  We had lunch at the Cinnamon restaurant in the hotel.  Jennifer had a tuna sandwich and Ivan had a noodle dish.  I had a good banana and cheese burrito.  We packed up our backpacks.  We checked out of the room.  We stored our luggage with the hotel.

We took the Sky Train to Siam Paragon.  Ivan went searching for a Tesco.  Jennifer and I went browsing around the mall.  Ivan went everywhere in the Siam Square, but couldn’t find a Tesco.  We walked up to the movie theatre.  We got tickets to see Madagascar 2: Escape to Africa.  The movie was really funny.

We took the Sky Train back to the hotel.  We bought Subway sandwiches to eat on the train.  We got our bags from storage.  We took the underground train to the train station. 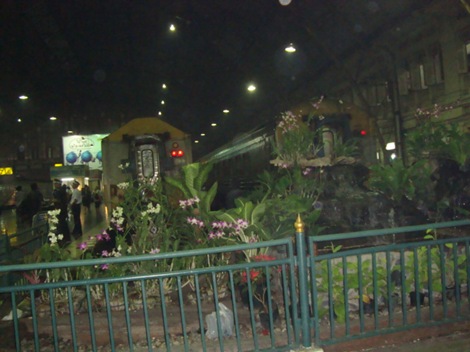 We settled down on the train with our backpacks.  Ivan went searching for food in the station.  Ivan and Jennifer had two bottom beds.  Right now, they were seats.  We departed at 8 pm.  Later on, a train employee turned our seats into beds.  There was curtain that covered each bed for privacy.  Ivan worked on his blog.  Jennifer read Tintin comics.  I listened to music on Jennifer’s iPod.  The train was pretty jumpy.  Jennifer put in her earplugs to block out the train  noises.  We went to bed.