Ivan, Jennifer, Neal, Rob and I boarded a mini-bus on December 27, 2008.  We were headed to Pattaya City, Thailand.  We arrived about 2 hours later.  The driver drove us around since we were looking for a place to stay.  We checked in at the Hard Rock Hotel.  It’s a really good hotel.

We walked to the Hard Rock Cafe for a late lunch.  Ivan had a good veggie burger.  Jennifer had a herb chicken dish with mashed potatoes.  I had banana tacos.  The food was delectable.  We went back to our rooms.

We all met up in the evening.  We had a drink at a bar.  We decided to check out Walking Street.  There are Baht Buses you can hop on.  It’s only 10 Baht and it takes you up Beach Road.  Walking Street is closed off to traffic. 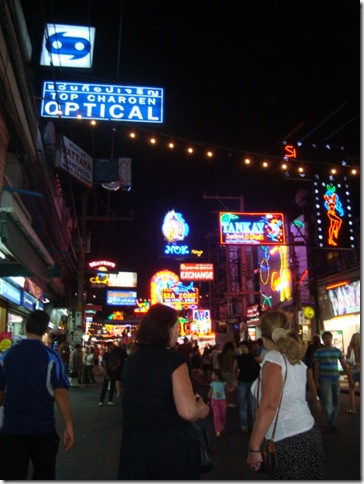 Ivan, Jennifer and I went back to the party.  There was a foam party going on.  The entry was reduced with the hotel package we got.  It came with a beer or soda can.  Neal, Nom and Rob met us there.  I didn’t want to go in the foam.  I watched Ivan and Jennifer go in.  Jennifer is so short – she disappears in the foam when it gets too high.  They had a lot of fun walking around in the foam.  The music was alright.  The DJ was playing a lot of Russian music.  Ivan mentioned that a lot of Russians come to Pattaya for vacation.

We woke up on December 28, 2008.  Ivan was going out with Neal and Rob.  Jennifer stayed behind.  I stayed with Jennifer.  Ivan, Neal and Rob walked around Pattaya.  They went shopping in the mall.  They went quad biking as well.  Ivan had great fun.  Rob had some bad luck and crashed his quad bike.  Jennifer chilled in the room for the day.  We said goodbye to Neal since his flight was later tonight.

Ivan, Jennifer, Rob and I walked to Tequila Reef.  The Mexican food was good here.  I had a two banana & chicken tacos.  Jennifer had a chicken taco and a cheese enchilada.  We went to a lively bar and had some drinks.

On December 29, 2008, Ivan and I went to relax by the pool.  Jen had a bad stomachache and stayed in the room.  I think it was all that cheese from the enchilada.  She slept and watched some tv.  I wish there were monkeys staying at the Hard Rock Hotel.  We found out that Neal’s flight was canceled – so he came back to Pattaya. 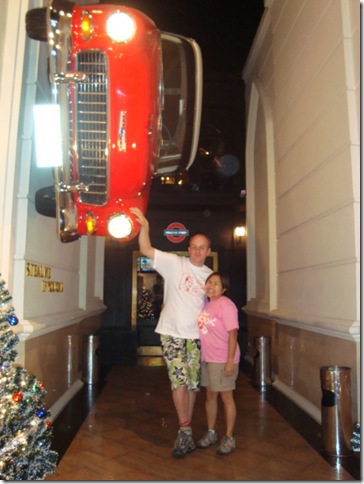 The sign is like the Tube location signs in London.  There was even one that said Las Vegas.  The bar was playing hip hop music.  Ivan, Jennifer and Rob had a few drinks.  I had a nice banana & strawberry fruit juice.  We went to another bar for more drinks.  There’s a lot of bars on Walking Street with the tv playing football and music blasting away.