Ivan, Jennifer and I woke up around 9 am on December 9, 2008.  Breakfast was eaten and then we walked to Serendip.  We were going on a Booze Cruise.  The boat was supposed to leave at 10 am but didn’t end up leaving until 10:20 am.  If you haven’t figured it out, the point of a booze cruise is to drink a lot and have some fun.  I was hoping to have some fun since I was the only monkey on board.  I was also going to be the only sober one on the boat.  Everybody was given a free shot of Jagermeister and Red Bull.  Ivan and Jennifer were drinking.  The group was filled with mostly men.  It was a lively, fun group.

We went to an island with a beach.  The people who wanted to go cliff diving got off the boat.  Earlier, the guide Tom was saying we had to be careful of jumping since there were sea urchins on rocks.  If a sea urchin got in your foot, the only way Tom could get it out would be to push it out the other side.  Jennifer wanted to do the jump.  She climbed on the rocks up towards the cliff.  I think it helped that she was drunk – otherwise she might not have done it.  I think she was crazy to do it.  The video will soon be online of her jump.  It was actually easy to jump.  Jennifer told me she wasn’t scared and just jumped.  She had thought of doing a cannonball but seemed to forget about it.  She ended up falling on her thighs.

Jennifer jumping off the cliff! 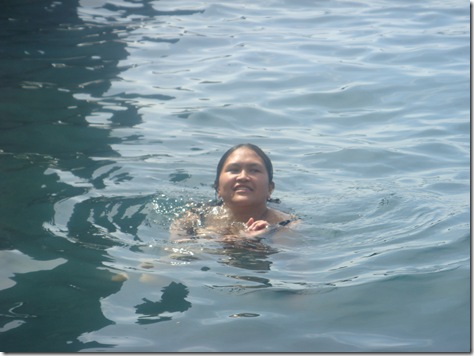 Jennifer after the cliff jump

People thought she belly flopped.  She was glad she did it since it was fun.

Everybody got off the boat and went to the beach.  There was volleyball net set up.  Lunch was being cooked for us.

We went swimming in the warm water.  It was really shallow water.  Jennifer played volleyball – but she wasn’t very good.  She’s so short, she couldn’t get the ball over the net when she served.  We had an alright lunch of burgers.  I just had a banana sandwich.

We were sitting on the beach and swimming around.  It was a really nice day.  At one point, Jennifer was chasing this guy and trying to beat him up.  She kept saying why are you running from a girl?  The chasing stopped.  Then the guy started throwing sand at her in the water.  Jennifer started chasing him again.  Ivan asked what did the guy do to you?  She said she had no idea why she was chasing him.  Jennifer would throw punches at him.  He through her on the ground.  It didn’t stop her – she just kept chasing him.  Jennifer did hurt her finger when she tried to grab his water bottle.  It pulled off skin from her finger.  It was funny seeing this guy getting chased by a girl.  I watched the chasing around from a tree and laughed a lot.  Ivan told Jennifer that he was scared of her since she was small and scary.  I made a mental note of not making Jennifer mad.

It was time to go back to Serendipity Beach.  The boat ride seemed really long on the way back.  I think it was because we were so tired and wanted to get back.  The sunset was really nice. 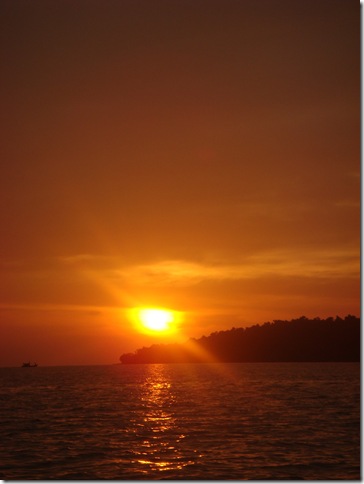 We finally arrived at 6 pm.  We got changed in the room and wanted to get some food.

We walked up the street to the Reef Resort.  The resort has a Mexican restaurant called The Mexican.  Ivan and Jennifer got the chicken satay for a starter.  Ivan ordered the chicken fajitas.  Jennifer got spicy beef tacos.  I got the banana taquitos.  The food here is great.  Ivan loved his chicken fajitas.  We all decided we might be back for more Mexican food soon.  We went back to the room to watch some tv.  We were weary from the crazy crui se.

We went to the beach again to relax on December 10, 2008.  Ivan found some chairs where we could lay down.  The chairs were covered by an umbrella.  We went swimming for a short while.  Then, we laid down.  Ivan and Jennifer were reading books.  I took a short monkey nap.  Jennifer got a manicure and pedicure.  She also got hair taken off her legs.  The lady used a string.  She said it would last three months – but Jennifer didn’t believe that.  She had her upper lip hair done with the string technique in Dali, China and it didn’t last three months.  It didn’t matter the manicure, pedicure and hair removal only cost $5 total.  There’s always people trying to sell you things like jewelry or fruit.  Ivan and Jennifer got some pineapple and mango from a Cambodian girl.  She chopped it up in small pieces.

Of course, I got my favorite – bananas!

It was dinnertime and we headed to The Mexican again.  The same starter of chicken satay was ordered.  Ivan got the chicken fajitas again.  Jennifer got the spicy chicken burrito.  I tried the banana fajitas.  Again, the food was so good!  We went back to the bungalow.  We slept early since we had to wake up early.  We had a long bus ride ahead of us going to Siem Reap in the morning.