The Killing Fields and Snakes in Sihanoukville

Ivan, Jennifer and I went to the Tuol Sleng Genocide Museum on December 5, 2008.  It was formerly the Khmer Rouge S-21 Prison.  In the courtyard, there’s 12 grave sites of the last victims they found.  The first building had steel beds on the first floor. 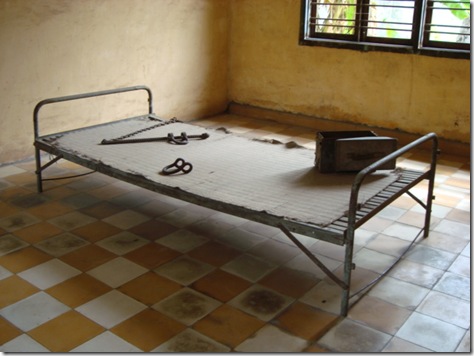 On the wall, there was a picture of a victim on the day they died.  It was quite gruesome.  The next building had pictures of the prisoners.  It was really sad seeing the kids the most.  The last room had some skulls.  A few of the skulls had a plaque that stated how old the person possibly was and how they were killed.  There was another building that had brick cells on the first floor. 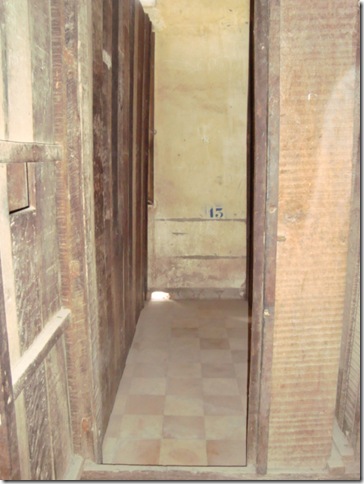 The second floor contained cells made out of wood.  There were also stories about survivors with a picture of the person then and now.  This is a very depressing place.  There’s a showing of a movie at 10 am or 3 pm but we were too early for the movie and didn’t catch it.

We walked across the street to get some lunch at the Boddhi Tree Cafe.  We were eating healthy today and  ordered salads.  The salads had unique combinations and tasted great. 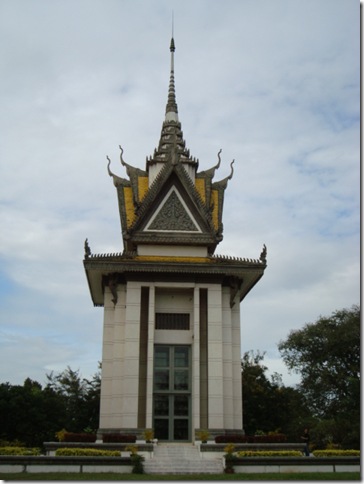 The memorial is filled with skulls and the clothes of some of the victims.  This is where the Khmer Rouge killed tons of people.  A lot of the buildings that were used were gone. 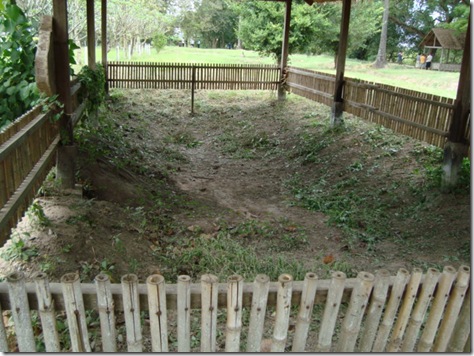 You can walk around the area and see a few mass graves.  It’s really sad to think of the horrible things that occurred here.

We went to chill in The Lost and Found Bar.  It’s a bar filled with pillows and everybody sits on the pillows.  Ivan and Jennifer played Connect Four for awhile.  It was nice to relax after the somber afternoon we had.

We had breakfast at Simon’s II guesthouse on December 6, 2008.  We booked the bus  to Shinoukville.  We checked out of the guesthouse.  We got a mini-van to the bus station.  The bus was supposed to leave at 12:30 pm, but it ended up leaving at 12:50 pm.  Ivan and Jennifer watched some Weeds on the laptop.  I took a short nap and then read a book about banana dishes.  We arrived shortly before 5 pm.

We got a tuk tuk to Serendipity Beach.  Ivan found a place to stay at Beach Road.  It was overcast today.  We hoped that it would be sunny for the next few days so we could enjoy the beach.  We walked around and checked out the stores and bars.

We took motorbikes to the Snake House for dinner.  It’s a restaurant that houses lots of snakes – some which are poisonous.  It also has frogs, lizards and fish.  I wish they had some monkeys there too – I mentioned it to the manager and he said he would think about it. 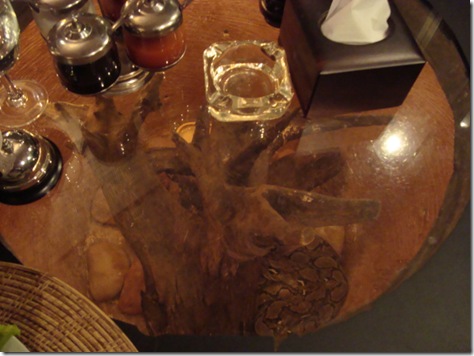 The dining table was covered in glass and right below it was a snake.  The cuisine is Russian at the Snake House.  Jennifer ordered the Chicken Kiev and a side order of Mashed Potatoes with Mushrooms. Ivan had some really tasty Pineapple soup with fish and a Russian Salad. I had the Cous cous with Chicken and Bananas.  The food was really good. 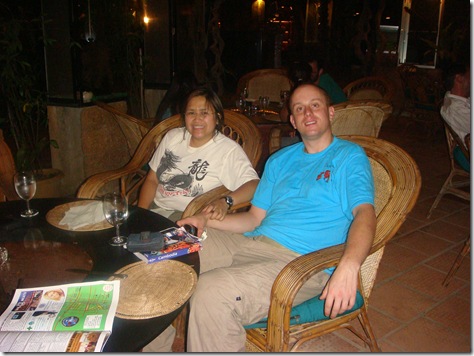