Monkey traveling upside-down near a cave

Ivan, Jennifer and I went to the Reed Flute Cave in Guilin on October 17, 2008.  Right when you walk into the area, you get pestered with people trying to sell you books, postcards or a bamboo ride.  Ivan said later to one lady.  For some reason they kept bugging Ivan and not Jennifer.  Most of the locals think Jennifer is Chinese because they just automatically talk to her in Chinese.  She is part Chinese actually.  The caves are beautiful inside.

They add different colored lights to make it look cool.  The Chinese seem to name every rock formation things like Crystal Palace.  Sometimes they look like the name but usually not.  I guess it’s all in the imagination.  The cave is really big.

There were two tour groups inside, so it was pretty busy.  Jennifer thought it was the best cave she’s been to.  We also checked out the Turtle Cave.  There was a few turtles that they claimed were a thousand years old.   Maybe it’s just a name like the thousand-year egg.  It’s an egg that’s preserved for a few weeks or a few months.  I really doubt these turtles were that old.  They did look rather old though.  The old, big turtles didn’t do much and just sat on the table.  The Chinese ladies put money on the turtles.  I don’t know what that means though.  Ivan fed one of the turtles a banana.  I wanted to snatch the banana, but he paid to feed the turtle. 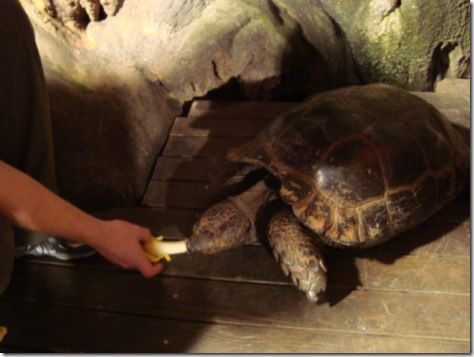 He was pretty slow at eating it.  We left the turtle area.  At the end of the cave, there’s a light show.  It was nice.  We left the cave.  The lady Ivan said later to was back and bugging Ivan to buy a book or some postcards.  Jennifer was trying to communicate in Chinese to this lady.

We took the bus towards the Seven Stars Park.  Ivan was really hungry.  So, we stopped by a Chinese restaurant to get something to eat.  Ivan and Jennifer ordered an eggplant dish and steamed buns.  I got the fried bananas.  The dishes turned out to be bigger than we thought they would be.  The food was real good.  We went to the Seven Stars Park next.  We walked around the park.  They have a cave but we didn’t check it out.  It was close to closing time.

We saw a few monkeys, birds and a camel.  There’s a panda exhibit.  The pandas were in a room by themselves and they were dirty.  Jennifer thought it was really sad and couldn’t take any pictures.  We all thought the pandas should be outside playing in nature.  I guess the park was doing construction and that’s why the pandas were in the rooms. 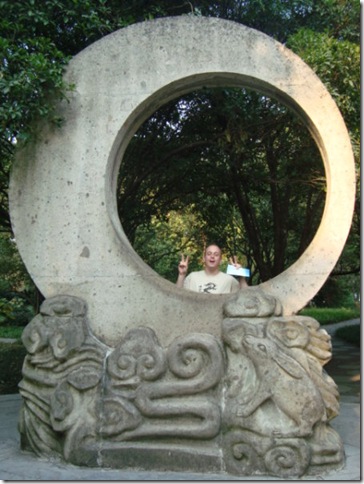 There’s Camel Hill where the rocks look like a camel.  The park wasn’t very exciting.

We woke up really early on October 18, 2008.  We would be picked up by an English guide to be taken to the ferry.  We were going to take a boat ride from Guilin to Yangshuo on the Li River.  The boat ride is a four hour ride.  We boarded after 9:30 am.  We were going to have lunch at 11:30 am.  The bottom has the dining area.  The top of the boat is where you can view the scenery.  Unfortunately, there’s no chairs on the top.  We were just sitting down on the floor.  A Chinese lady would announce the different names of the hills that were going by on the loud speaker.  Ivan thinks it’s redundant that they tell you the silly name they made up.  Ivan and Jennifer put on their iPods and chilled out. 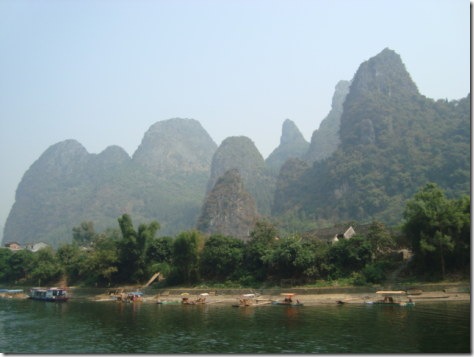 Jennifer thought it was really peaceful just staring at the water and the passing scenery.  Everybody says it will be the highlight of your trip.  It’s really beautiful, but Ivan and Jennifer didn’t think it was spectacular.  Lunch was actually at 12 pm.  The setup is 8 people to a table.  We were seated with two backpackers from England (from our same group) and then four Chinese people who didn’t speak English.  Each table is served a bunch of dishes.  There was vegetables, omelet, chicken and noodle entrees.  Jennifer was trying to use the chopsticks to pick something up.  The Chinese man was laughing at her because she wasn’t having any luck picking it up.  Jennifer just laughed right along with him.  I was happy with my dish of chicken, onions and bananas with a bowl of rice.  I don’t know how to use chopsticks.  I just use my small monkey hands to eat my food.  It was quite tasty!  The meal wasn’t too filling for Ivan and Jennifer.  We went back to the top to enjoy the scenery.  It was quite hot though. 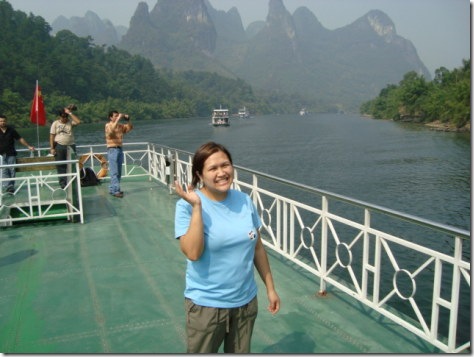 I hung upside-down on the railing by my tail.  This really made Jennifer nervous.  She didn’t want me to fall into the river.  The tour guide Shopping showed Ivan and some other people how to determine if you have fake money.  It turned out that Ivan had a fake 20 Yuan.  He was talking about it to some of the people from the tour.  Jennifer made a video on the boat for her friends and family.  We finally arrived about 2 pm in Yangshuo.
We didn’t book a hostel for the night.  So, were walking down West Street towards a hostel we were going to book when we arrived.  Instead, Ivan saw the Backstreet Youth Hostel and we went to check it out.  The room was clean and had a window.  It did have a squat toilet.  But, it was going to be for one night so it was alright.  I went out to get a banana ice cream.  Ivan tells me that they have banana pancakes in this city.  I was happy to hear that!  Ivan and Jennifer got their own ice cream cones too.
Dinnertime came and we went to Drifters, which is right by the Backstreet Youth Hostel.  I had 3 banana pancakes. 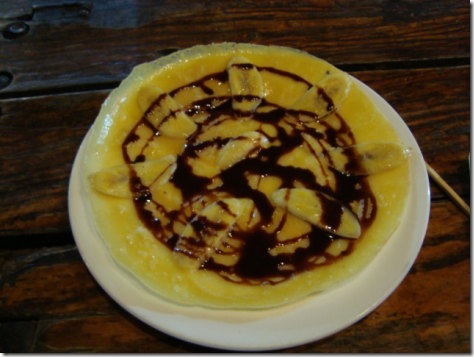 Ivan had a mushroom soup for a starter.  He thought it needed more flavor.  His main dish was tofu with vegetables.  He didn’t like that it came with too many tomatoes.  Jennifer had the chicken cordon bleu.  She seemed to like it.  The french fries were lacking in flavor.  Ivan and Jennifer each had a banana and chocolate pancake for dessert.
We walked to the Night Market to check out what was being sold.  It’s all about the bargaining here.  The workers seem to start really high.  Here’s what I learned from Ivan about bargaining.  You can name your price and they will usually say no.  You then walk away.  If they really want you to purchase it, they will call you back.  Jennifer has never bargained before. 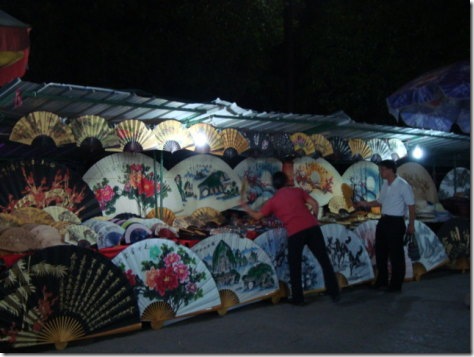 Jennifer saw a good cotton hat she wanted.  Ivan asked for 20 Yuan.  We were going to check out another stand to find a good price.  The lady walked to where we were.  Ivan said 15.  She accepted that price.  The hat fit Jennifer pretty well.  Jennifer thought she looked like a fisherman in her new hat.  It was a good busy day.  It’s been crazy moving around so much.  But, any day with lots of bananas is good.