On October 2nd, 2008 we went to The Peak on Hong Kong Island. It’s a high area overlooking the city. There are shops and restaurants at the top. Ivan, Jennifer and I waited in the long line to buy tickets. It was still busy because of the Chinese holiday. The guide book says the holiday lasts a week. The tram took us all the way up to The Peak.

Jen and Ivan on the tram

The view is really nice. You do see a lot of the smog though. Jennifer said it was comparable to the smog in Los Angeles. We went up to the top on the Sky Terrace. Ivan thought the view would be better in an hour or so.

We headed to Bubba Gump Shrimp restaurant. Jennifer was going to work on a blog post on the laptop. Ivan and Jennifer each had a strong drink. There was also a nice view of the skyline and the city. We tried to go back to the Sky Terrace. But, you can only use your ticket once. I thought that was dumb. Oh well.

The line for the tram back was extremely long. Ivan thought we could walk back or take a taxi. A policeman said there was no walking down but there were taxis around the corner. It was getting dark, so I don’t think walking would be a good idea. The taxi took us to the Lan Kwai Fong area. It’s a cool area with great nightlife. It’s filled with restaurants, bars and clubs.

Ivan wanted to go to a restaurant called Life. It’s a vegetarian restaurant. We went up the longest escalator to the area. The restaurant was above the retail area downstairs. Jennifer thought it was a cozy, romantic place. I guess because it was dimly lit in the restaurant. Jennifer had a wheat pizza with mushrooms. It had a nice sized portion of rocket on top. She thought it was a bit odd. She enjoyed her pizza.

Ivan sent me home in a taxi. Unfortunately, I’m too young to enter bars. Ivan and Jennifer went in search of a bar called The Cavern. Jennifer read online about this bar and another one that had free drinks for ladies on Thursdays. They found it. Ivan asked if there was any live music for the night. There would be two bands playing. The first band was already playing. It was a band of five guys. They were really good. The band played nice rock songs like Live or Gin Blossoms. Ivan asked to see when they would be playing faster music. The band plays slower music since people still have dinner. It would be faster in an hour or so. Ivan and Jennifer walked around the area to find another bar in the meantime. They went inside Club 97. It was free cosmopolitans for ladies. The music playing inside was hip hop. Ivan ordered a fruity drink and Jennifer got a free cosmopolitan. The music wasn’t very good. They decided to go back to The Cavern. The Cavern had another band later on. It was upbeat music like We Will Survive. All the members are Filipino. Jennifer wasn’t feeling good. Her throat was sore. She didn’t feel like staying out too late. Ivan and Jennifer left around midnight and headed back to the hotel.

Ivan, Jennifer and I went out on October 3, 2008. We were celebrating Ivan’s birthday. It’s actually a month earlier. But, since Ivan and Jennifer were apart. Ivan thought they should celebrate in Hong Kong a month later. Jennifer picked out a nice dim sum restaurant to go to. We all hopped on the Star Ferry to head to Kowloon. The Jade Garden was the restaurant of choice. It had a nice view of the skyline. Jennifer and Ivan ordered like nine different dim sum items like shrimp dumplings and chicken and rice wrapped in a lotus leaf. They both enjoyed the food there. We went walking around the shops area to find some good things to buy. I saw lots of bananas. 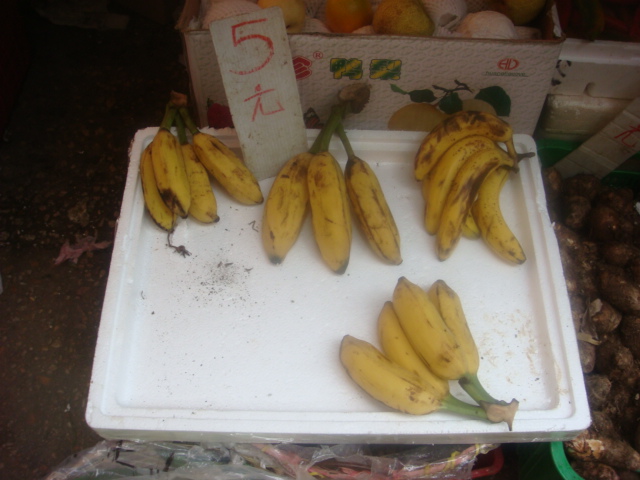 They tasted so sweet! Yum! I wish they was more bananas everywhere.  We all went inside an arcade.  Ivan and Jennifer played against each other in a racing game.  We went to a big park. It had two cool fountains there. 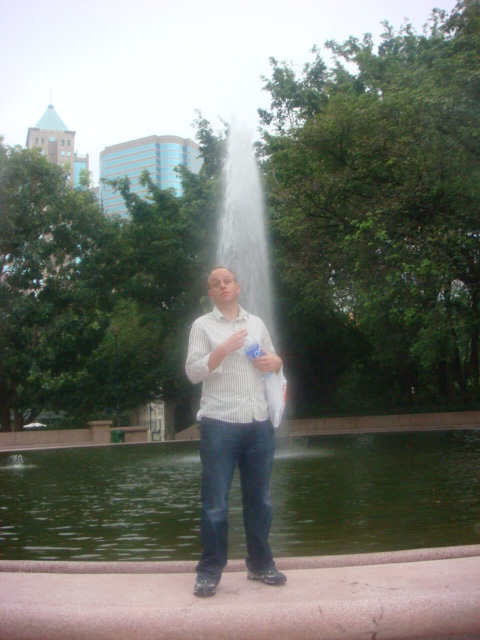 I was put in a cab to go back to the hotel. I miss out on all the good fun!
Ivan and Jennifer went to the Wan Chai area. They wanted to find some good bars to hang out in. Ivan found a bar called Bell Inn. It was happy hour and the drinks were a little cheaper. He bought two San Miguel beers. San Miguel is a beer from the Philippines. Jennifer said she had never tried one before. But, of course, she had heard of it (since she is Filipino). Ivan asked the bartender if he could borrow a deck of cards. They played the card game Cheat! Ivan won the 3 out of 5 games. Jennifer said she was getting a bit drunk. They went to a bar called The Makati. Jazz music was playing inside. Ivan didn’t want to stay though. So, they left and went in search for another bar. There was some live music playing inside Club Amazonia. Jennifer thought the music was okay, nothing special. It was nice to relax though. Ivan and Jennifer sat on uncomfortable chairs just chatting and having a drink. They went back to the hotel afterwards. It was a great day!