Lots of Walking and Fireworks

Jennifer and I had to wake up early to catch our flight to San Francisco on September 29, 2008.  It was nice because it turned out that nobody was sitting to Jennifer on the first flight.  She let me sit in the seat.  It was definitely better than being in a backpack for the whole ride.  We stopped next in Tokyo.  It was raining there.  Jennifer bought some cute little souvenirs at the airport.  Finally, we arrived in Hong Kong.  Jennifer was so tired.  She kept sleeping on all flights.  But, it was much needed since she hasn’t been sleeping much lately.  I saw Ivan at the airport first.  I don’t think Jennifer saw him because she kept walking to the exit.  We were both happy to finally be in Hong Kong and be done with flying.  It was a long day of flying like a total of 15 1/2 hours.

The taxicab took us to the hotel.  Ivan chose a nice hotel called the Marriot Courtyard.  It’s located on Hong Kong Island.  It’s a great hotel.  I don’t think this is officially backpacking yet.  It’s much too nice.
We woke up early on October 1, 2008.  It was time to go exploring the city.  Ivan had bought a cool walking tour book of Hong Kong.  Ivan, Jennifer and I walked so much in Central.  We went to this park where people show off their birds.  Nobody had birds. 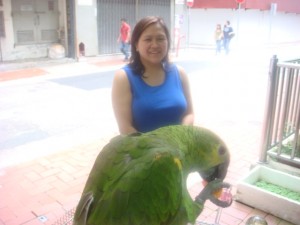 But, they had a bird shop right next to it.  We took the Star Ferry to Kowloon.  It was a Chinese holiday.  There was going to be a fireworks display at night.  Jennifer also wanted to go to Kowloon.  She played a game a long time ago called Shenmue 2.  The main character went to Kowloon.  She thought it looked like a great place to go.  It was already busy near the Avenue of Stars since there was a fireworks display.  People were lined up already at 5 pm for the celebration.

Jennifer wanted to check out the Space Museum.  It’s free admission to the exhibitions on Wednesdays.  Unfortunately, it was nothing special.  Jennifer said she only stayed because it had great air conditioning.  We had been walking all day in the humid heat.  It wasn’t that hot but the humidity will get to you.  We went to find the Chung King Mansions.  It’s a big building that contains restaurants, shops and hostels.  Ivan heard about a great Indian restaurant called Everest.

After dinner, we headed to the Avenue of Stars.  It was even more crowded.  We were going to catch the 8 pm Symphony of Lights show.  It was hard to see since there was so many people there.  I only saw part of the show with Jennifer and Ivan.  I didn’t think it was that exciting.  It’s just a light display with the buildings on the Hong Kong skyline.  But, Ivan said we’d see again another night so we’d get a better view of the show.  The firework show was going to be on at 9 pm.  We just sat down near the area chatting and wasting time.  The fireworks came on.  It was soo amazing!  The fireworks were really loud. 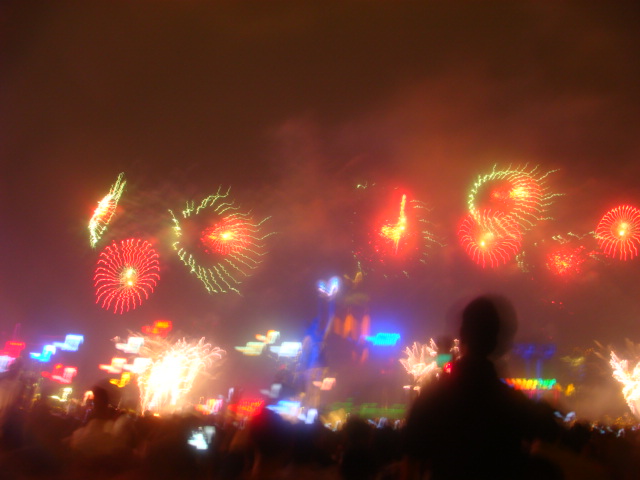 It went right over the bay.  Jennifer said it was the best fireworks display she’s ever seen.  I saw fireworks that said Hi.  It was really worth the long wait to see these fireworks.  The fireworks went on for about 20 minutes.  I’m sure you can imagine how busy it was after the show.  Ivan, Jennifer and I were walking through the crowds on the street.  We were going to take the train back to Hong Kong Island.  Whew!  It was a busy day.  Ivan and Jennifer were both tired and their feet hurt.