Ivan, Jennifer, and I went shopping more in Surabaya on June 27, 2009.  We couldn’t find an Eee PC with Windows XP though – they did have two with Linux.

We got a taxicab to take us to Malang.  There was a big accident on the highway.  Good thing, the driver talked to a local guy.  He led us to a shortcut away from the traffic.  We got to Malang in three hours.

We checked in at Guesthouse Peye.  It’s a great place with really spacious rooms. 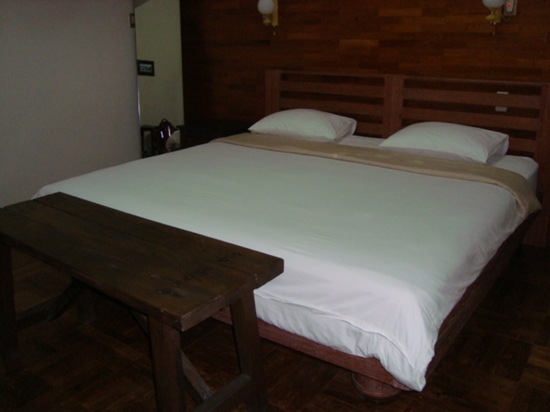 We took a taxi to Hotel Tugu.  It’s a beautiful place. 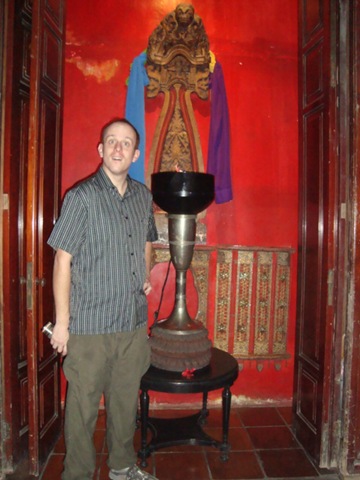 Although their pool needs some remodeling – it should be a lot nicer considering what the prices of the rooms are.

I stayed at the hotel since Ivan and Jen wanted a nice romantic night out. I got a banana and chicken sandwich from Room Service.  I watched some tv and jumped on the bed.

Ivan and Jen went to La’Amour Fou for dinner. 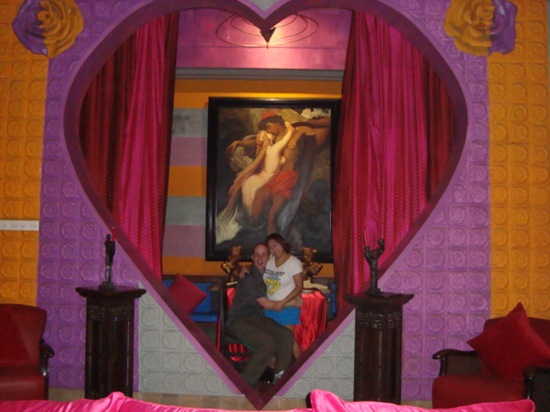 It’s a romantic restaurant that Ivan read about in his Lonely Planet book.  The atmosphere is very romantic with roses, flowers, gold statues, big paintings, and masks on the wall.  Outside it says La Chambre de Romeo et Juliette. 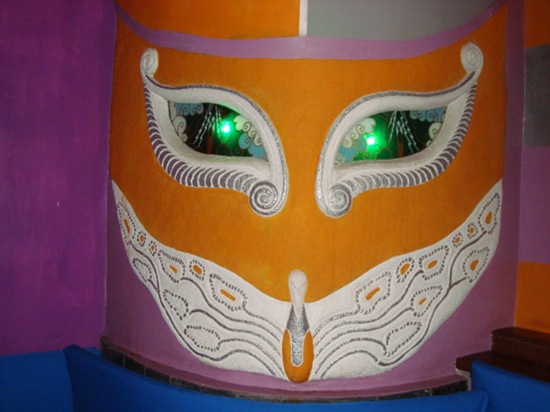 The area they sat in had a curtain for privacy.  Ivan and Jennifer shared the Taj Mahal Love Treasure pizza – which was a heart-shaped pizza with Indian-style chicken curry, bell peppers, raisins, and onions. 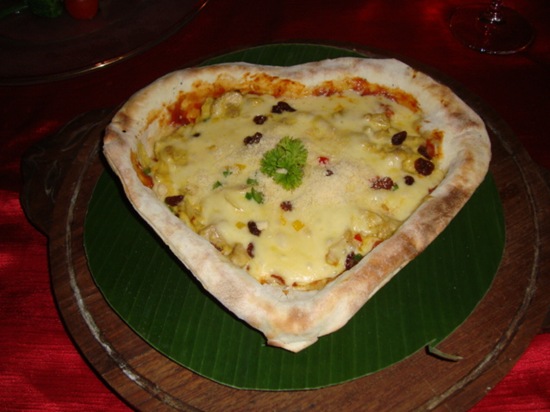 Although, it didn’t come with bell peppers or onions.  The chicken didn’t have much curry flavor.  They also shared a salmon in butter sauce.  They wanted the Chocolate Lava Explosion for dinner.  The server said they were out.  She came back and said that we were lucky and it was available. 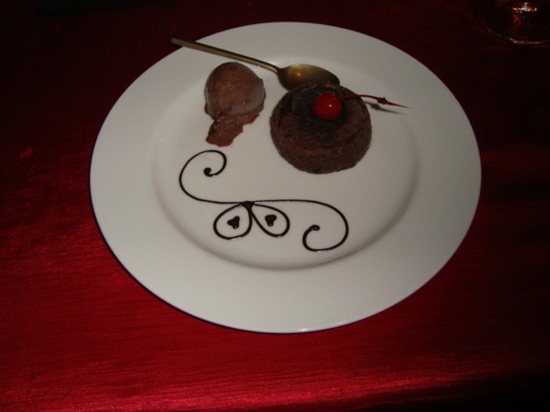 The dessert was alright.  It was a nice time at this romantic restaurant.

The Tugu Hotel recommended The Flame for a good place with live music.  Ivan and Jen took a taxi there.  Ivan popped his head into the club.  The band was decent but the club was empty.  They wanted   IDR for entry and it came with either a soda or a beer.  They thought that was too much especially since they don’t like soda or beer much.

Ivan and Jen got a taxi to another bar which they can’t remember the name.  The band there wasn’t too good.  They decided to check out another place.

They got to Hugo’s Cafe.  The band was okay.  They were singing Indonesian songs.  Ivan and Jennifer had a drink and then decided to call it a night. 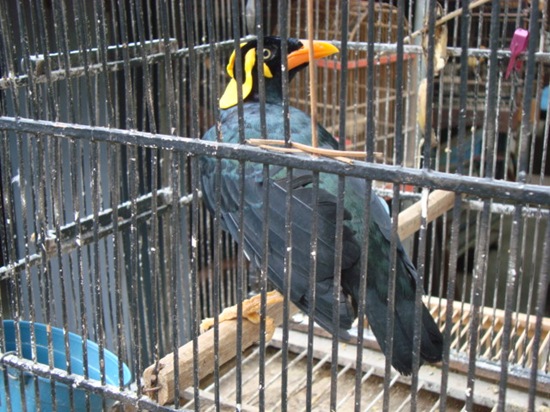 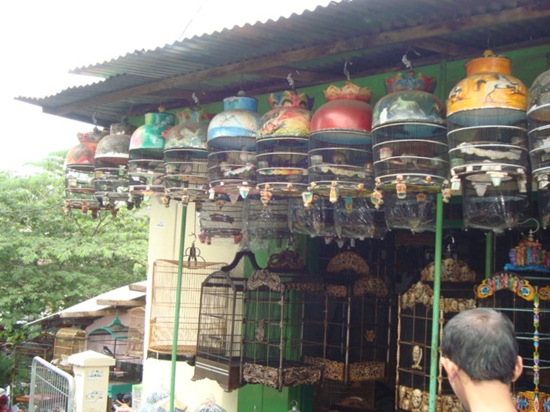 I’m glad they don’t sell monkeys in the market.  I would be horrified!  It wasn’t a big market.

We got a becak to Toko Oen restaurant.  It’s an old Dutch restaurant. 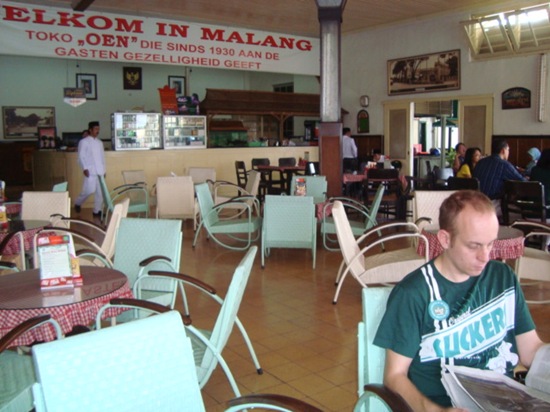 Ivan an omelet sandwich while Jennifer got a roast beef sandwich. 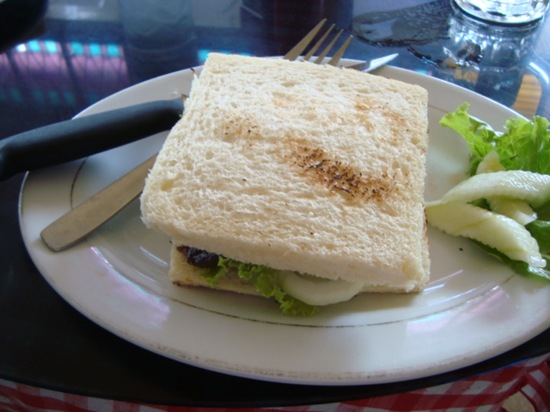 Jennifer has been craving a cheeseburger for a long time  She decided to give up pork and beef on this trip unless there’s nothing else to eat.  I had a banana and honey sandwich.  The sandwiches were just okay.  It was a little pricey for a small sandwich and no fries.

We went to a park.  Ivan read that there’s a show where the horses go around in the circle a long time, then they go into a trance.  When they’re in this trance-like state, they do weird things.  We waited for a while. 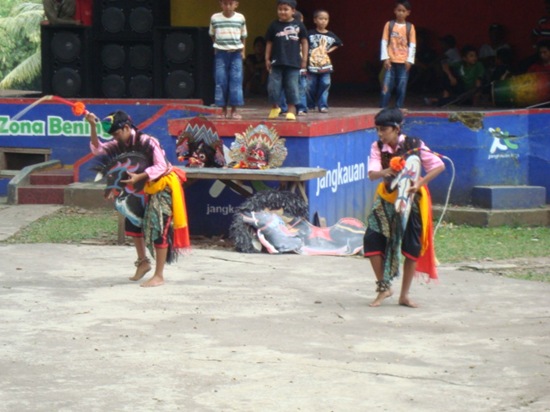 There were some kids dancing with horses and then more dancing with a dragon head.  It was really boring.  We watched for a while.  Ivan went behind the stage to see if they had any horses.  He didn’t see anything.  We left shortly after.

We got a taxicab to the Malang Dog show.  It was being held at the Ijen Nirwana Residence.  It’s the future site of a community of nice homes.  There were lots of dogs in cages right next to their owners.  Some of the owners had their dogs out so people can play with them.  It was a Break time since no events were happening.  I wanted to ride one of the big dogs, but no owner would agree to it.

Some dogs came out to the red carpet.  We couldn’t understand the announcer since he was speaking Indonesian.  But, I think it was the small puppy competition. 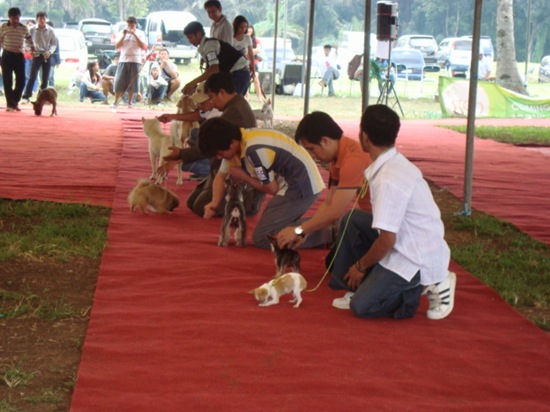 There were cute dogs like golden retrievers and Chihuahuas.  Jennifer picked the winner.  It was a fluffy Pekinese dog.  We watched a little more before heading out.

We tried to find a taxi.  We walked for a bit.  We wanted to get back to the hotel.  We got a taxi to pick us up.

Jennifer bought a pair of jeans in Jakarta.  She hasn’t worn jeans for 8 months.  Ivan wanted to see her wear jeans.  She needed to get them hemmed.  Ivan asked the taxi driver to take us to a tailor.  It was a couple of minutes of driving and then we reached the place.  It was located next to a Factory Outlet store.  Ivan wanted to check out some outlet stores to find a pair of pants.  We went into the outlet store.  Ivan found some boxer shorts, but no good pants.

Jennifer got her jeans hemmed and a hole sewn up in her skirt for 5,000 IDR ($5 USD).  It was definitely a bargain.  It was completed in 5 minutes.

We took a taxi back to the hotel.  We rested for a few hours.

We went to Padi Resto Galeri for dinner.  The restaurant is nice inside.  There was a good band playing.  I ordered the banana spaghetti in pesto sauce. 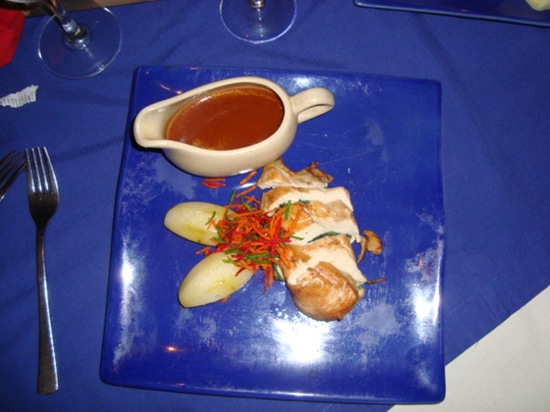 Ivan and Jennifer shared the garlic and spinach stuffed chicken and a salmon dish.  We wanted to get some dessert. 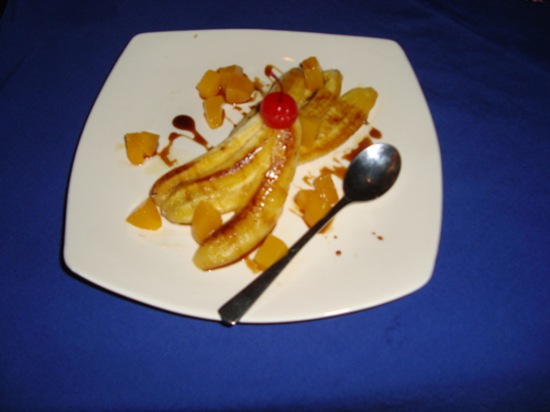 I got the delicious grilled bananas with peaches and chocolate sauce.  Ivan and Jen shared the colenak (fermented cassava with coconut).  They loved the taste of the cassava.