Ivan, Jennifer and I checked out of the Meligai Hotel on May 31, 2009.  We got picked up by a mini-bus.  Joshua was there.  He said that we would pick up another couple nearby.

We stopped at a store.  The couple (a Chinese lady and an American guy) from Singapore wanted to buy something for the chief of the Ibans.  Joshua bought some chicken and beer.  We also contributed to the gift.  Joshua wasn’t coming with us since he’d be heading to the longhouse later.

It took only about 40 minutes to arrive at the Iban Longhouse.  We had to cross a bridge that didn’t look so stable. 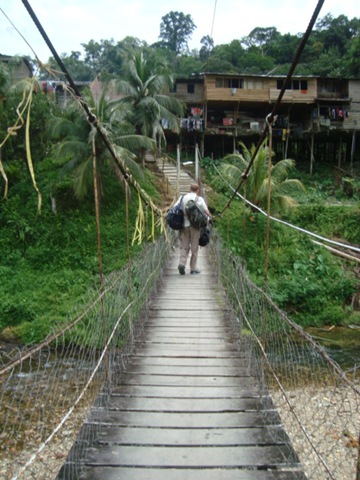 We made it across and had to climb some stairs to get to the longhouse.

Our driver took us to the chief’s house.  We put our backpacks down.  We were told that we’d sleep in this place for the night.  The longhouses are really long and have many houses in them.

We sat down and were served tuak (local rice wine) and sweets.  The tuak doesn’t seem strong when you drink it, but sneaks up on you later.

It was time for lunch.  Each house had food.  So, we stopped at two of them.  I had lots of bananas to add to my food.  I didn’t think there would be many banana dishes.  Each house would served tuak of soft drinks.  Ivan and Jennifer didn’t want to drink so much early.

Ivan and Jennifer ate some fish and vegetables. I had bananas with vegetables.

People were already passed out and it was only 1 pm.  Apparently, the Iban people start drinking early at 7 am.  The Singapore couple refused to drink since they didn’t want to get drunk.  They weren’t staying the night.

We went to another house across the way.  They didn’t seem to speak English though. 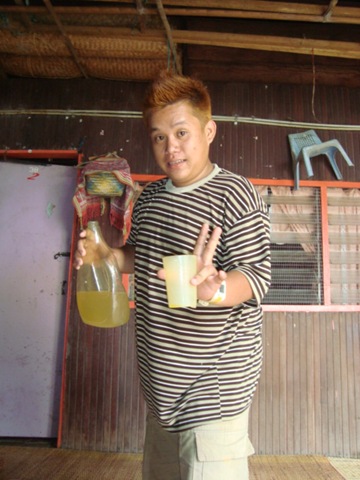 They poured us drinks though.  Everybody is so friendly and they want you to come visit them. 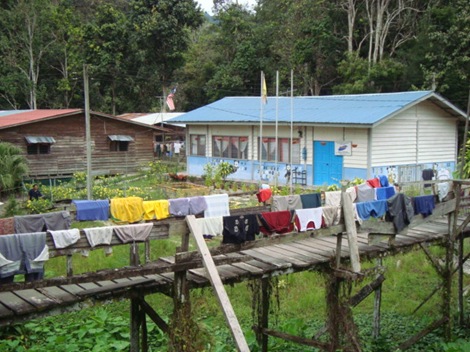 Only men watch the cock fighting.  There were so many men there.  Most of the men were betting.

The cocks have a spike attached to their foot.  The first to draw blood wins.  Yes, sometimes there are deaths.  The people create a big circle around the chickens.  We saw a few fights and a few actually died. 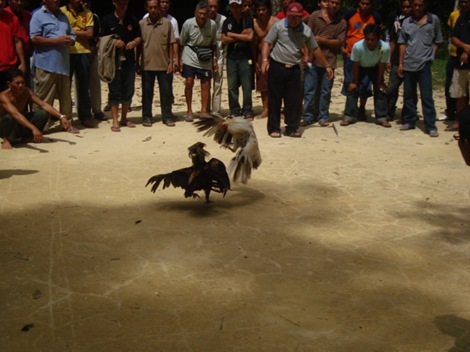 Ivan was betting.  He won 10 RM.  It was hot out.  We watched a few and then headed back to the house.  Cock fighting is very popular.  They even import cocks from the Philippines.  The fighting would go on until probably 6 pm.  I’m glad that they don’t have monkey fighting.  That wouldn’t be any fun watching.

We saw some piglets that would be killed later.

It was time for a traditional ceremony.  The guests were served aged tuak.  Ivan thought it tasted off – like expired juice. 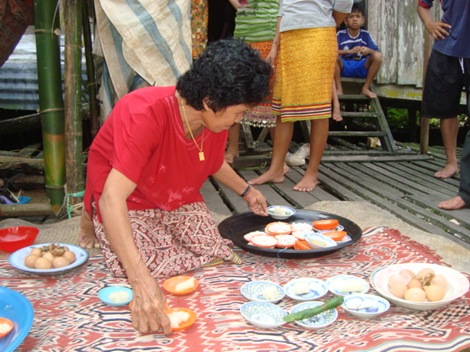 Dishes were placed on a sheet.  Then a few of the higher Iban members put a little of each dish containing rice (looked like popcorn), eggs, sweets, sticky rice, little cup with liquid inside and a chicken feather into a bowl. 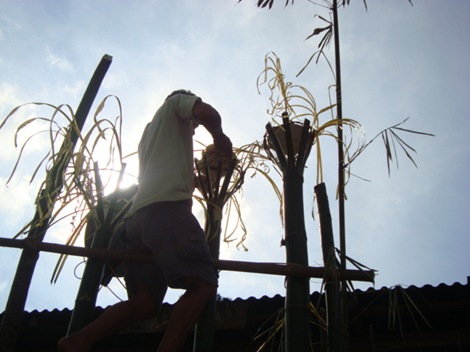 They placed them high in a bamboo holder.  I think it was an offering to the gods.  They only keep it there overnight.  Everybody watching the ceremony were passed a bowl with a spoon in it.  They had to drop some of the liquid on the ground.  I think the liquid was blood.

A little while later, it was time to kill the piglets.  Jennifer and I didn’t want to see it.  Ivan watched it happen.  They stick a spike into the piglet’s neck.  The piglet is screaming at this point as you can imagine.  Then, they cut the piglet’s stomach open and take out it’s liver (I think it was the liver) and they read it.  I’m not sure what the liver tells them.

We went inside to chill. 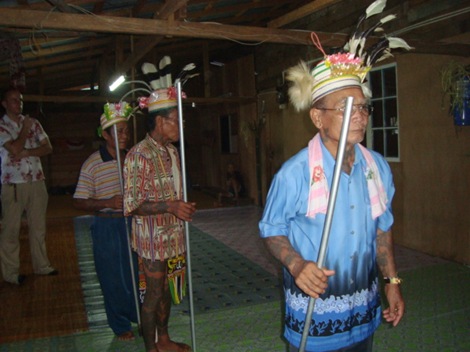 There were three men with sticks that kept banging at the same time and singing a tune.  They literally did this for hours!  They walked along the whole longhouse.  I wonder if they were in a trance.

The kid were firing off firecrackers.  They would place them in a bamboo stick.  It sounded really loud.  It made us all jump every now and then.

It was time for more tratditional ceremony but inside with each house.  This time Ivan got asked to make a bowl.  You get 2 RM for doing it.

Also, inside you hold a chicken and put it over people’s head to bring them luck.  Ivan did a good job.

He had to place the bowl in a wooden boat-like container that was near the ceiling. 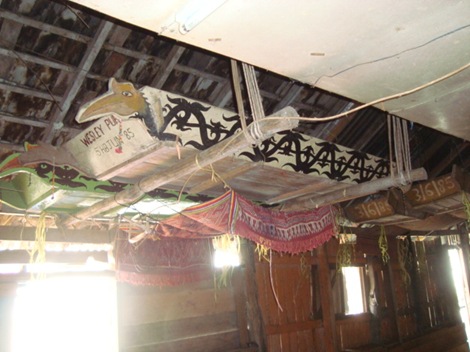 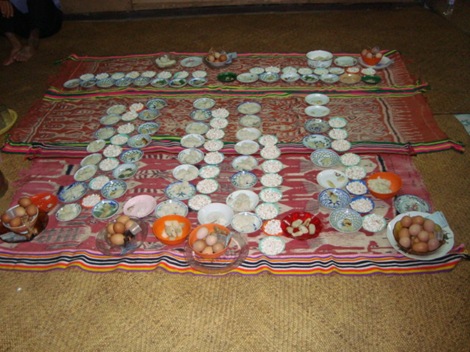 Ivan was doing it again.  Ivan made 14 RM today including what he won betting.  There were lots of houses doing it.

They were handing out tuak too.  I had my banana juice.  I wish I could have tasted the tuak though.

We were getting hungry.  Ivan found a house at the end that was serving sticky rice with chicken curry. 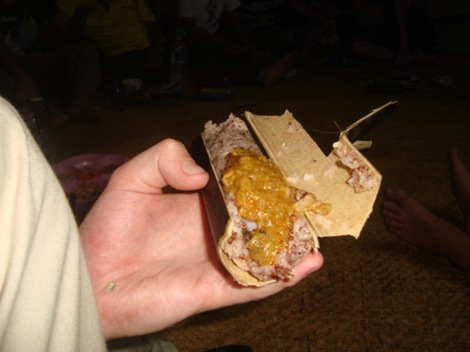 It was yummy.  I had sticky rice with chicken curry and bananas.

The houses were finished with the traditional ceremony.  It was time for dinner.  It was tasty again.

It was time to watch traditional Iban dancing.  There were musicians playing the gong, drums and xylophone.  One person would dance to the music. 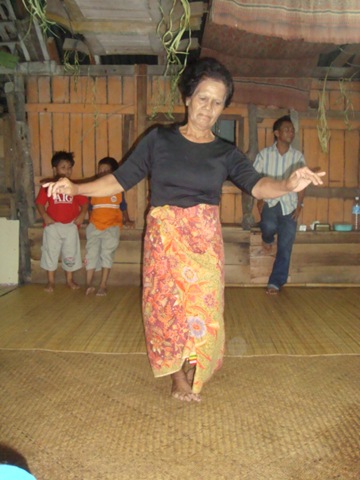 The Iban people do their traditional dance.  There’s one little boy who does the dance and he has a fake sword just for him. 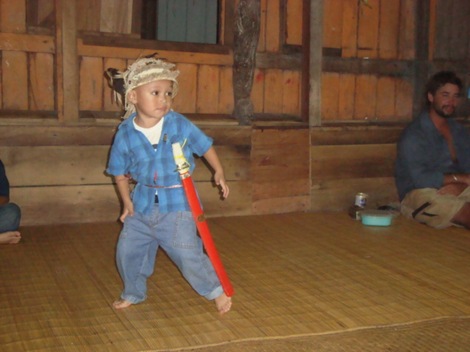 He’s the cutest little kid!  Some of the Westerns tried dancing too.  The crowd laughed.  One Iban guy did kung fu instead of the traditional dancing.  Jennifer wanted to try it, but she didn’t really want to with so many people around.  I danced around and did flips.  It was really fun.  The music is entrancing.

We went to rest inside the chief’s house.  We were trying to figure out where to sleep.  Downstairs, there’s a couch with a fan overhead.  Upstairs, there’s a bed but no air-conditioning or fan.  We decided to ask if it was alright to sleep upstairs.  It was fine, so we put a few of our backpacks upstairs to save the mattress for us  tonight.

We went back in the common area before midnight.  There were setting up the area for food.  They served tuak. 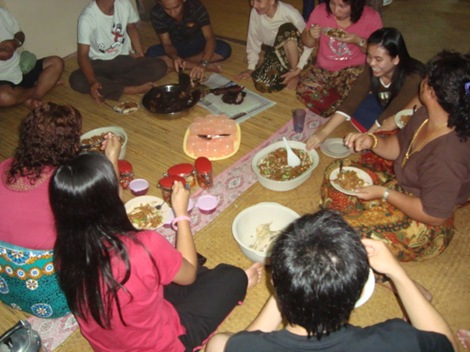 Jennifer and I had noodles.  Ivan had some chicken.

Soon after, we wanted to head to bed.  We all fell asleep.  Then, we hear the music starting.  It was as the music from the karaoke music at the lancao factory when we stayed at the other Iban longhouse.  Yes, they started playing Tanda Poco Poco.  We hoped that they would play it earlier and we could dance.

We did manage to go back to sleep.  But, we kept waking up because of the loud music.

If you want to see more pictures from the Harvest Festival – check them out here!