Ivan, Jennifer and I had the buffet breakfast at the Atrium Cafe on May 27, 2009. 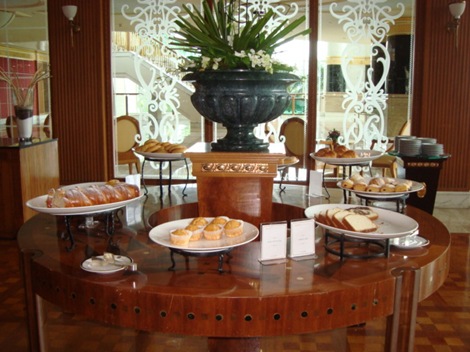 There was lots of food available like noodles, toast, muffins, bread, salads, fruit, pancakes and waffles.  The food was really good.

Most of the things at the hotel you have to pay for like tennis or the golf course.  But, the hotel offers free events everyday.  Today, there was a bowling clinic available.  We took a buggy to the country club.  The bowling alley was empty.  It has 8 lanes.  We got our shoes and grabbed a few bowling balls.  I’m glad they had a light monkey-sized ball for me. 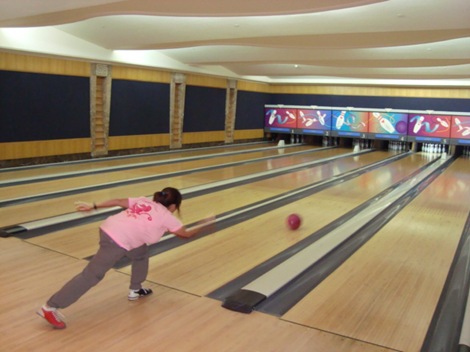 Jennifer wasn’t bowling so good the first two games.  They have a contraption that lets you place the ball on it.  Then, you press the handle and it rolls down the contraption.  Ivan and I started using it. 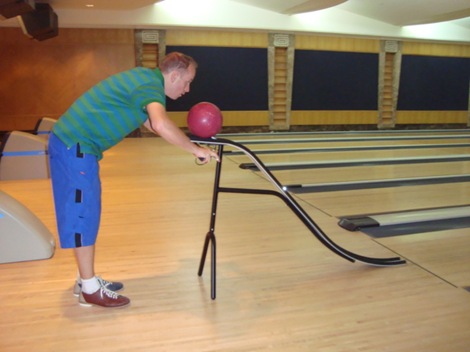 We got a buggy back to the room.  We chilled in the room for a little while.  There’s no wi-fi in the room.  There is free wi-fi in the lobby and the restaurants in the hotel.  There’s also a free computer near the lobby of the Seaview builing.  Ivan used the internet.  We jumped on the bed and took pictures. 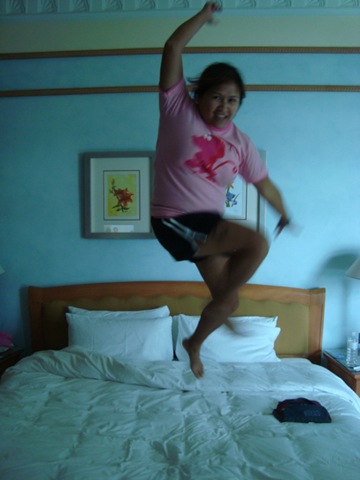 Jennifer wanted to add pictures to the Bed Jumpers page on Flickr.  I tried doing it but my pictures turned out too blurry.

We walked to the Lobby Lounge.  It was English High Tea.  Ivan ordered one of the tea sets. 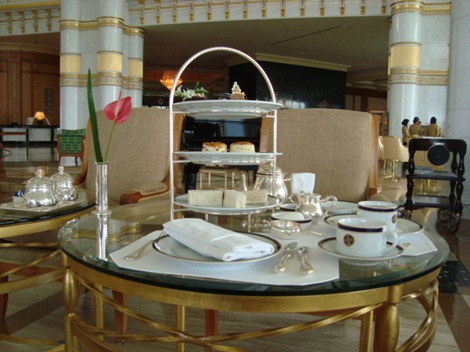 It came with sandwiches, desserts, a pot of tea and scones.  I brought a banana juice.  The scones were hard.  Ivan said they probably re-heated old ones.  He told one of the employees there.  She said she would get us new ones.  The food was really good.  Jennifer made a video to friends and family back home. 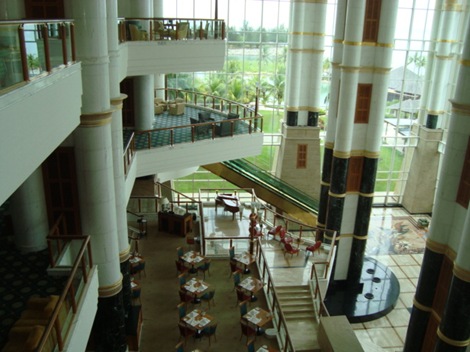 The hotel is really beautiful.  It’s just great walking around it.  We went to the pool again. 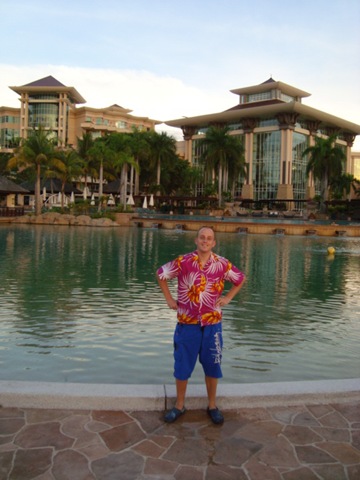 They have a beautiful piano near the Atrium Cafe.  It’s custom made.  Usually it’s set to play by itself.  Jennifer told Ivan that he should play the piano since it wasn’t playing. 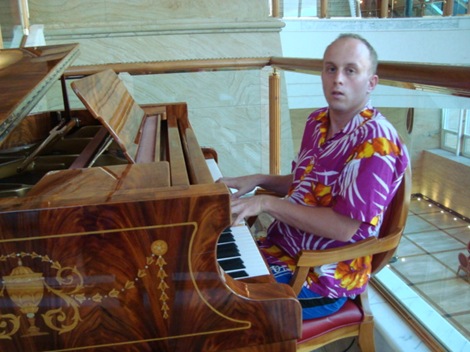 He played for a short while.

We chilled in the room.  Ivan and Jennifer drank some red wine.

We took a taxi to the Jerudong Theme Park.  This theme park was a gift for the sultan’s son’s birthday.  It was free for a long time.  Then, they started charging and then nobody came to the park.  It was $5 Brunei to enter.  Only three of the rides were open.  Ivan read that it’s better to come drunk.  So, they were buzzed when they went.  There was probably only 7 other people in the theme park.  It was so eerily empty.

We went on the merry-go-round first.  Ivan rode on an ostrich while Jennifer and I rode a reindeer.  It was cool since it went up and down.  Good fun!

Next, we walked to the bumper cars.  I rode with Ivan.  Jennifer got her own car.  There were four other cars driving around.  Jennifer kept laughing and saying Boing! when she ran into other cars.  It was so much fun!  There’s lots of statues around the theme park.  Jennifer liked taking pictures with them. 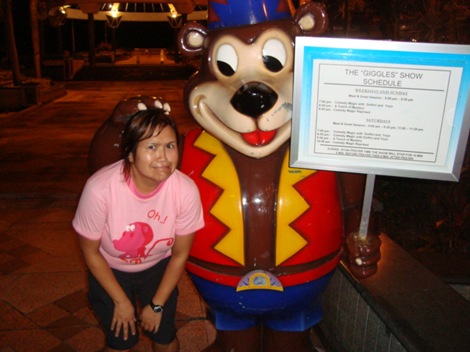 There suppose to be a magic show at 9 pm.  We got there at 9:05 pm and there was no show on.  Ivan went backstage to see if it was going to be on.  A lady told him that it was over already.  Ivan said it couldn’t have gone on already since it was only 9:05 pm.  The show came on a few minutes later.  It was us and another couple watching.  The show was only 10 minutes or so. 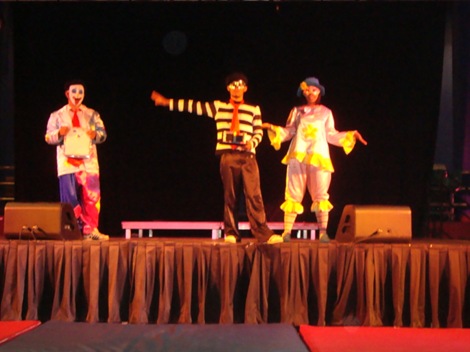 It was entertaining though.  We clapped a lot.  The couple behind us didn’t even clap at all.  That’s rude! 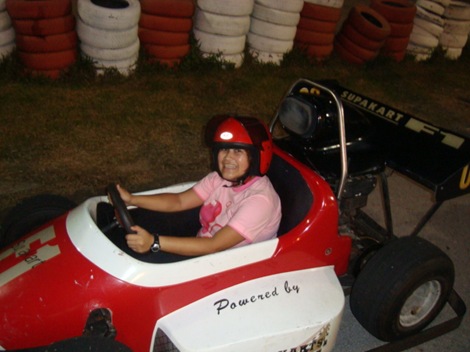 We were the only ones riding the track.  The track was pretty long.  I rode with Ivan.  Ivan and Jennifer raced against each other.  We rode two mores times at $1.50 Brunei for each ride.  It was a good time at the theme park.

There aren’t any taxicabs waiting at the theme park.  We were trying to hitchhike.  A few minutes past and we weren’t having any luck.  Finally, a car stopped by.  They were kind enough to take us back to the Empire Hotel.

We walked to the Atrium Cafe for dinner.  Jennifer got the pesto pasta while Ivan got a noodle dish with chicken.

I had a banana lasagna.  The food was really good.  Jennifer thought it was the best pesto dish she’s ever had.

We walked back to the room.  We were really tired so we went to bed.