Ivan, Jennifer and I had to wake up extra early on April 2, 2009.  We were headed to Ko Tao today.  We were picked up by a mini-bus at 7:20 am.  Ivan and Jennifer watched Family Guy on the laptop.  I took a monkey nap.  Jennifer also took a nice nap.  The bus ride was 4 hours long.

We transferred to a bigger bus.  It took us to the pier. 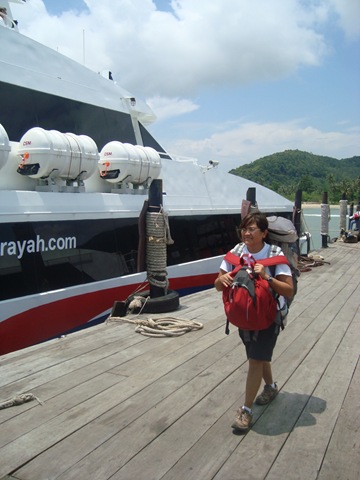 We boarded the ferry run by the company Lomprayah.  We were going to Ko Tao.  Ivan and Jennifer watched something on the laptop.  I listened to music on the iPod.  Jennifer started feeling seasick as the ride was very rough.  She took a short nap.  The ferry ride took 2 hours long.

Ko Tao means Turtle Island.  We looked around for somewhere to stay.  We checked in to Ko Tao Island Resort.  Unfortunately, there’s no free wi-fi at the resort.  There’s free wi-fi at Coasters.  The paid internet is 2 Baht per minute.

Ivan rented a motorbike and we rode around for a bit. We saw the nice sunset.  We drove to find a restaurant that has sushi called Morava.  Ivan and Jennifer started off with tuna with noodles.  The noodles were thin and white.  The noodles were tasteless and looks like Styrofoam. It was not a good start to the meal.They also got some tuna sushi rolls.  The sushi wasn’t that good.   I had a nice banana stuffed chicken with a small salad, and it was actually pretty good.  Ivan and Jennifer had a good main course. 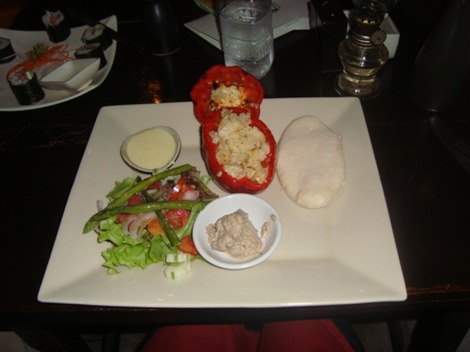 It was a bell pepper stuffed with cous cous.  It also came with a small salad, a pita and hummus.  Jennifer was still hungry for some reason.  So, they ordered a chicken dish.  It was actually chicken and vegetables fresh spring rolls, and it was a tasty dish. We were all stuffed now.

Ivan drove us around to find something to do.  We saw a few ladyboys advertising their show at The Queen’s bar.  It started at 10 pm.  We decided we’d check it out later on.  We saw the Cave Bar. 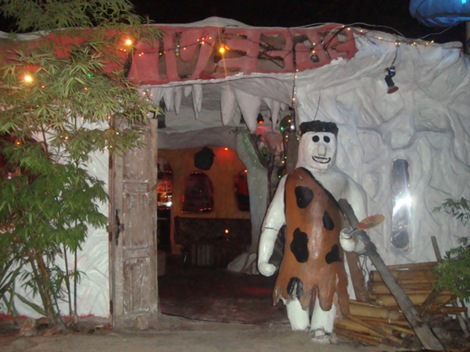 It’s based on the tv show The Flintstones.  The place has rooms to stay in as well.

We heard live music at Papa’s Tapas.  We sat down on some bean bags.  Ivan and Jennifer each ordered a glass of white wine.  The guitarist only played for a couple minutes and then stopped.  I think he had been playing for awhile.  Papa’s Tapas has lots of cocktails but they’re 300 Baht each, which is about 9 dollars. Ivan inquired about this.  An employee said that they’re created by a guy who’s one of the 10 best bartenders in the world.  Ivan and Jennifer didn’t think that mattered….its not as if this guy is making them.

We walked to The Queen’s bar for the ladyboy show.  It was 10 pm but the show still wasn’t on.  The entry is free but each person or monkey must buy at least one drink.  Ivan and Jennifer each got a Bacardi Breezer.  I ordered a banana juice.  The show started.  The costumes were really good.  The ladyboys danced really good. 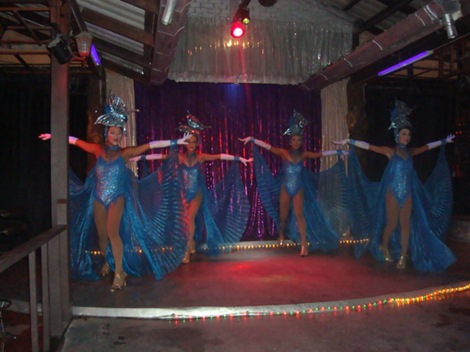 There was lip-synching.  This was 100% better than Simon Cabaret.  The sets weren’t that great compared to Simon. 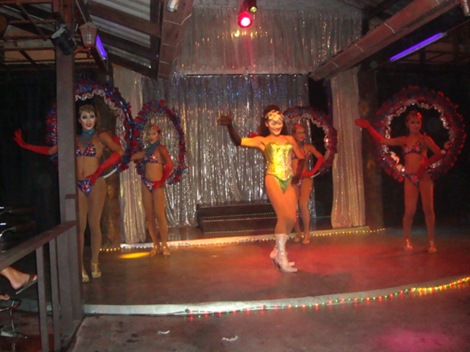 The ladyboys kept smiling a lot and they were having fun.  There was a funny part where a ladyboy was dancing around. 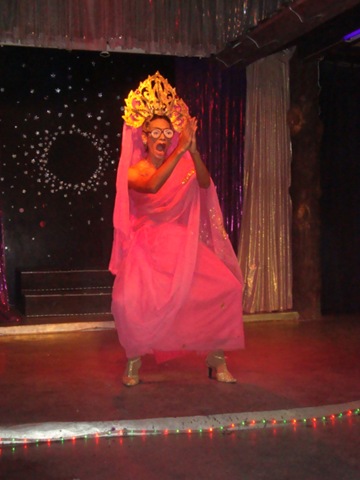 He actually pulled out a fake man’s genitals at the end.  It was so funny!  There was one set where a ladyboy takes off all the make-up and clothes while dancing, so that he goes from looking like a ladyboy, to looking like a man…that bit was quite clever.  We really enjoyed the show. At the end, the ladyboys picked a few volunteers from the crowd.  They dressed them up in costumes.  The men looked really funny with wigs and dresses on. 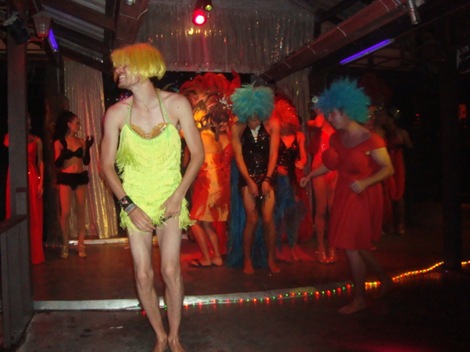