A Temple and Mahout Training

Ivan, Jennifer and I went to have lunch at Cafe Croissant d’Or on January 18, 2009.  Ivan ordered tomato soup and a tuna sandwich.  Jennifer got pumpkin soup and a chicken sandwich.  I ordered a banana and honey panini.  Ivan and Jennifer liked the sandwiches, but the soups were too good.  My panini turned out quite nice.

Jennifer went to get a facial at Lotus du Laos Spa.  Ivan and I walked around the town during her facial. 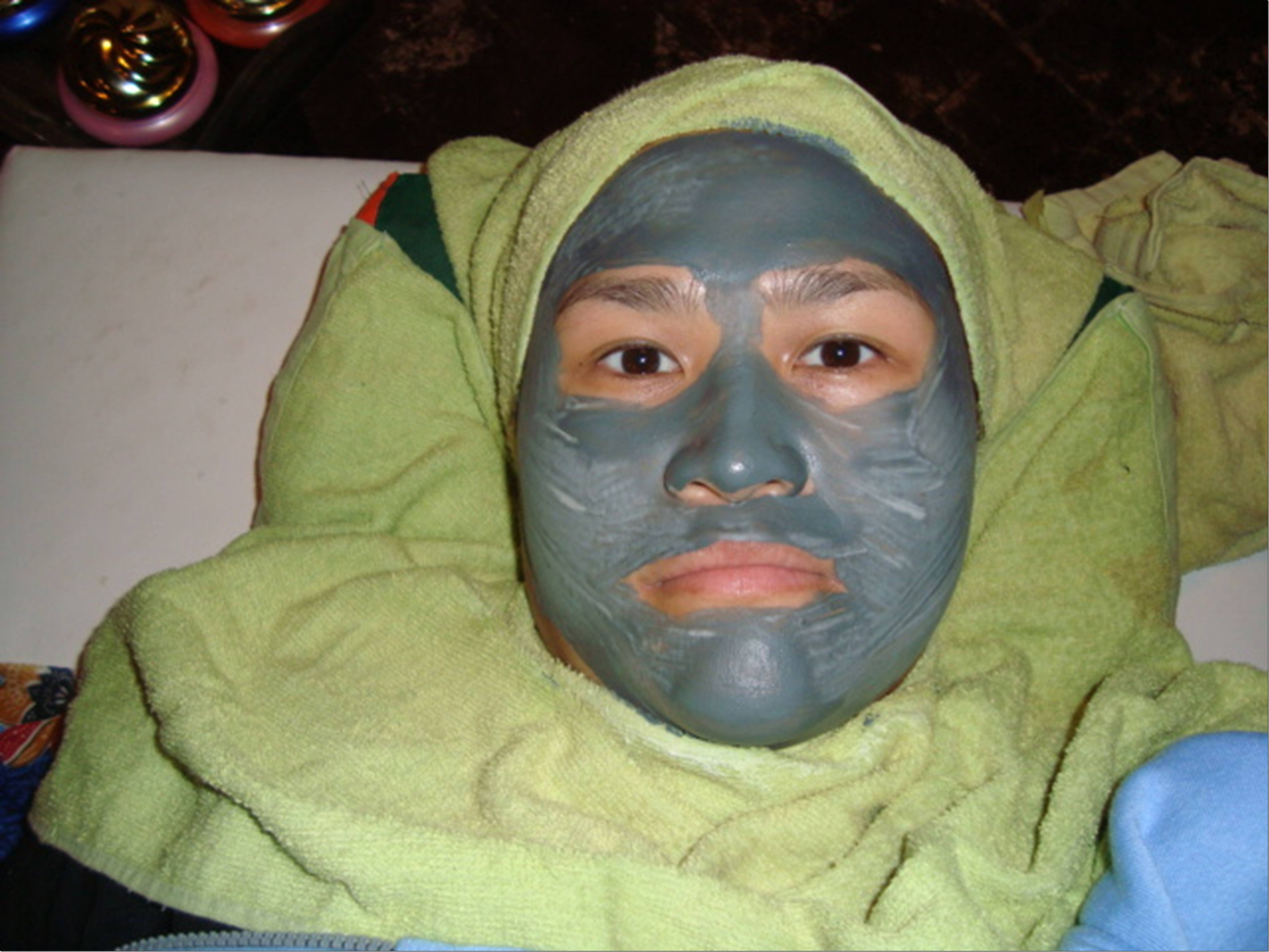 She thought the facial was really good.

We walked to Wat Xieng Thong.  It’s one of the oldest temples in Laos. 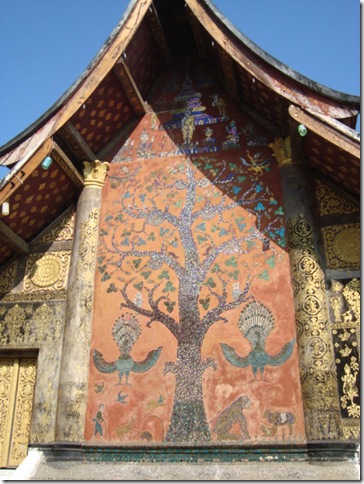 One of the buildings has the Tree of Life on the outside.  It’s really nice.  There was also a big death carriage. 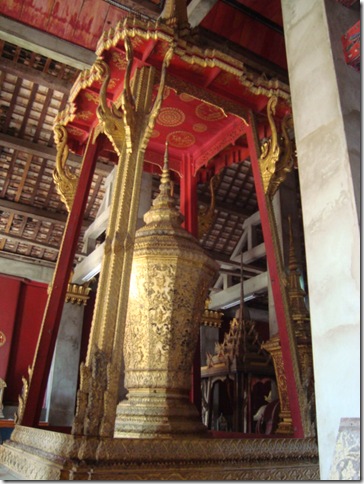 In one of the smaller buildings there’s a reclining Buddha.  It was once in France at one point. 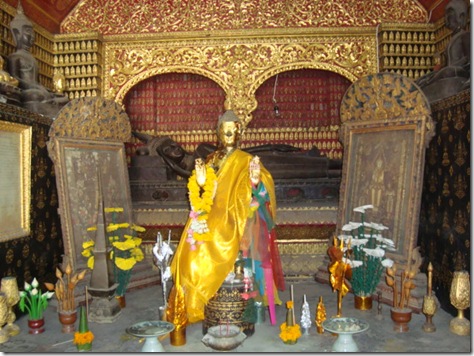 We stayed awhile at Lao Wooden House before dinner.  I picked up a banana shake and a banana crepe for my meal.  We walked to the Indian restaurant Nazim for dinner.  Ivan and Jennifer orderd the Chicken Kebab again.  They also got Chicken Karahi (which has tomato, ginger and garlic), a garlic naan bread and rice.  I ate my meal while Ivan and Jennifer waited for their food.  The Chicken Kebab was great again.  The Chicken Karahi was bland.

We checked out of the Lao Wooden House on January 19, 2009.  We walked across the street to Sok Dee Guesthouse and checked in there.  We had to get ready since we had a mini-bus picking us up at 9:30 am.  We boarded the bus and drove to the All Lao Elephant Camp.  The bus was filled with five people and a monkey.  Ivan and Jennifer signed up to do mahout (elephant driver) training today.  The other three people in the car were just doing the elephant riding.

First, we were going for a safari ride on the elephant.  Ivan, Jennifer and I hopped on the carriage that’s on top of the elephant.  The mahout was guiding the elephant through the forest.  The ride was quite bumpy. 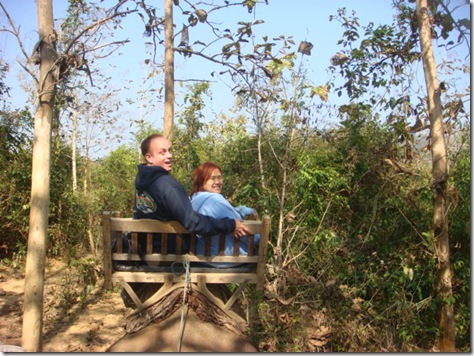 It was scary going downhill since you had to hang on. Thank goodness there’s a railing on the carriage!  The ride was an hour and a half ride. 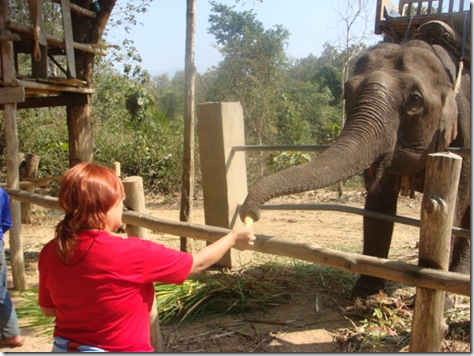 Jennifer gave me a bunch to feed the baby elephant.  I fed her one banana and kept the rest for myself.  What kind of monkey would I be if I gave all the bananas away?  I’d probably get kicked out of the Banana Club.  We walked to the restaurant for lunch.  We had sandwiches.  Our guide gave Ivan and Jennifer a paper with mahout commands.  The Lao commands were telling the elephant to go, go right, go left or to stop.  There was also commands for spraying water since we’d get a chance to bathe the elephant later. 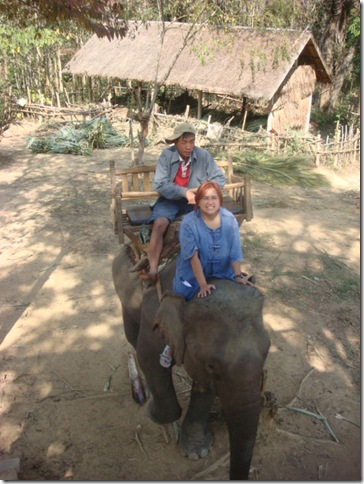 Ivan and Jennifer shouted out the commands to make the elephants move.  It was actually really cool sitting on the elephant.  The ride wasn’t bumpy.  I had to hang on to Ivan’s back though.  I got scared once when we went down a steep part.  I jumped on Ivan’s shoulders and closed my eyes!

We had some time to waste.  So, our guide took us tubing.  The water was really cold.  Since there was no current.  We had to paddle.

It was time to bathe the elephants.  I decided to watch since I was already wet from the tubing.  Ivan and Jennifer hopped on an elephant with a mahout.  The elephant went into the river.  They cleaned the elephant using a brush and water. 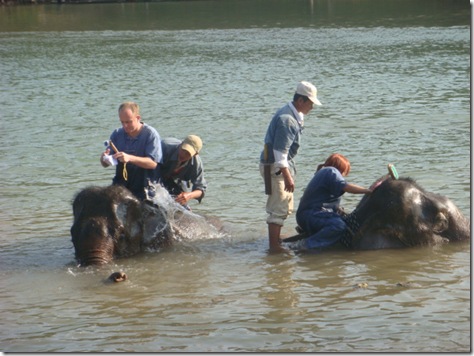 It looked really difficult.  Jennifer tried to climb higher on her elephant so she could clean his head.  The elephants looked a lot cleaner, but not sparkling clean.  I went back onto Ivan’s elephant.  We rode again in the forest on the elephants.  Ivan and Jennifer were good at giving the commands.

We were back at the restaurant.  We waited a few minutes and got on to a mini-bus.  We got dropped off into town.  We walked back to our Guesthouse and relaxed.

It was time for dinner.  We walked to Tum Tum Bamboo on the main street.  Ivan and Jennifer shared the tasty tofu spring rolls.  Ivan got Laos soup.  Jennifer had chicken with basil leaves.  Her dish was small and didn’t fill her up.  I had stir fried banana & vegetables.  The food was decent.  We walked down the street.  Jennifer ordered a chocolate crepe for her and a banana one for me. The crepe was delicious.

We stopped by the Mojito Bar.  Ivan and Jennifer had a mojito.  It was full of great flavors.  I had a banana juice.  We walked back  and watched the rest of Harry Potter and the Philosopher’s Stone.