Ivan, Jennifer and I arrived in Nha Trang, Vietnam early on November 23, 2008.  We walked around the city to find a place to stay.  We checked in at he Nha Trang Beach Hotel.  It was raining here.  It was unfortunate for us, since Nha Trang is known for its beautiful beach.

Ivan and Jennifer wanted to go to the VIP spa.  I decided to have a massage and chill for the day.  I’m not into mud baths.  Monkeys and mud definitely do not mix.  It would take forever to get mud out my hair!  Ivan and Jennifer took the bumpy road to the spa.  The road was filled with pot holes.  They bought a mud package for 80,000 dong each.

First, they proceeded to the showers.  They both went under the warm mineral water showers.  Next, they walked down to the mud bath.  They were told it would be with other people.  But, it ended up that they were in their own tub.  The mud wasn’t hot (since that’s more money) but it felt nice on the skin. 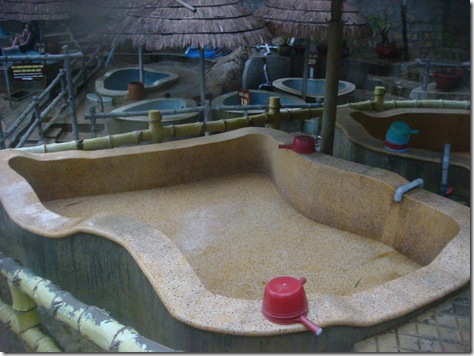 They sat in the mud for a few minutes.  It was back up to the showers to wash all the mud off.  They went to the mineral water spray.  Then, they went to the mineral bath.  The water was really hot.  You can sit in here for 45 minutes.  It was too much for both Ivan and Jennifer.  They walked to the big heated pool and got inside.  They swam around.  It started showering a little.  There’s a nice waterfalT area.  They sat underneath the waterfall for a little while.  It was time to drive back to the hotel.  I was already chilling at the hotel.  My Vietnamese massage was great.

Lately, we’ve been getting satellite tv in the hotels we’ve been staying at.  Jennifer is happy since she can watch Cartoon Network.  It doesn’t show Adult Swim though.  We walked around Nha Trang to find a good restaurant.  We sat down at the Why Not bar and restaurant.  Ivan ordered a tuna pizza while Jennifer picked the meat bolognese. I had the banana fettuccine dish.  There were great drink specials going on.  So, Ivan and Jennifer ordered a drink.  The food was okay.  We saw the Canadian mother and daughter team from the Halong Bay trip.  We talked about the bad rainy weather.   We had a good time relaxing at the bar.

We all slept in on the morning of November 24, 2008.  We went to Pho Cali for lunch.  Jennifer had the beef pho.  Ivan ordered a vegetable noodle dish.  I had a banana noodle dish.  The food was good.  Ivan thought it was okay.  Jennifer liked her pho, but it made her sweat a lot.  We took it easy today.  I worked on a blog post in the hotel room.  We had cheese sandwiches for a snack.  I had the banana monkey version though.  The sandwiches from the street stands are really tasty.  It was nice to really get a chance to relax.  It’s crazy running around all the time exploring cities or towns.  We went to a great restaurant – I can’t recall the name though.  The food was great here.  Jennifer had the chicken in a clay pot.  I had the banana and fish in a clay pot.  Ivan got the fish hot pot.  It turned out to be a nice chill day.

It was another overcast rainy day on November 25, 2008.  We wanted to check out Monkey Island.  The brochure said there was go-karts, ostrich riding, monkeys and an animal show.  We took a boat to Monkey Island.  There was an animal show already going on.  There was monkeys doing tricks like riding on bikes and walking on tightrope.  The show was alright.  We walked towards the go-karts.  Unfortunately, we couldn’t since the track was wet.  A bunch of monkeys started gathering on the path. 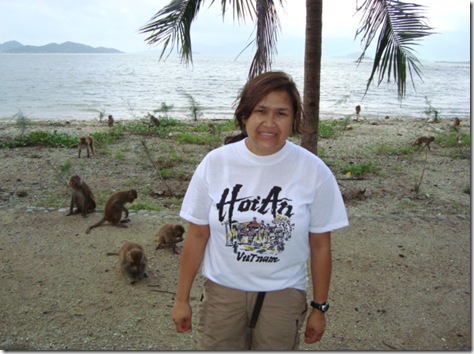 Some of the tourists were feeding the monkeys corn and crackers.  I decided to be nice and give them some bananas.  I tried to talk to them, but they didn’t seem to understand me.  They did enjoy the bananas though.  There were lots of monkeys in varying sizes.  The small monkeys are the cutest ones.

We went back to Nha Trang.  We walked around and found the Italian Restaurant.  The food is really delicious here.  Ivan had a tuna pizza.  I had the banana lasagna.  Jennifer had the ravioli with pumpkin and cheese.  We had a few hours left before our bus to Ho Chi Minh City.  Ivan went on the internet.  Jennifer had a massage and a manicure.  I just relaxed with Ivan.  At 8:30 pm, we jumped on the sleeper bus headed to Ho Chi Minh City.