Ivan, Jennifer and I had breakfast in the villa cooked by Ivan’s mum on October 1, 2009. 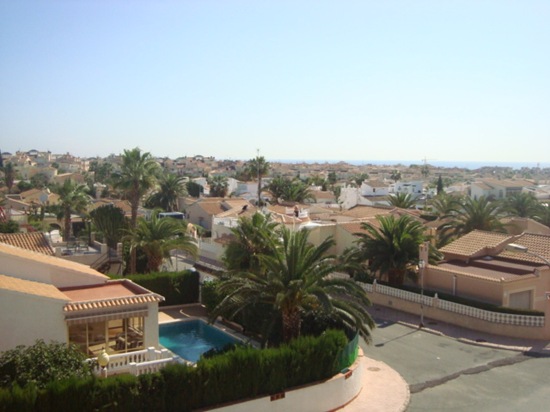 We drove to a supermarket next.  We bought some food.  We drove around some. 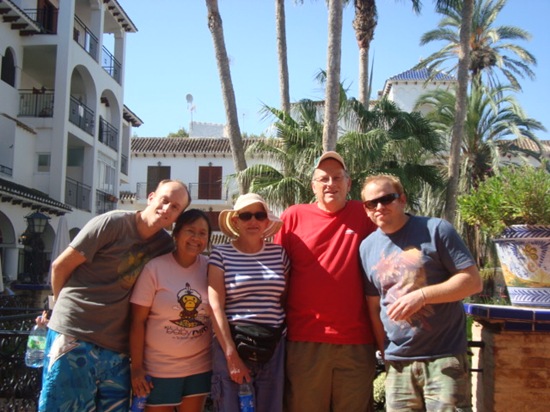 Everybody had lunch at the house.  Ivan and Jen had veggie burgers.  They were lacking in flavor.  I cooked some tasty banana burgers.  They wanted some but I didn’t want to share.

Jennifer was a bit tired and took a nap.  I watched while Ivan, Neal and Ivan’s dad played Monopoly.  Neal won the game.

Ivan’s dad drove us to Torrevieja.  We walked along the seafront.  It was a nice walk with great views.  There’s a few cool statues as you walk by. 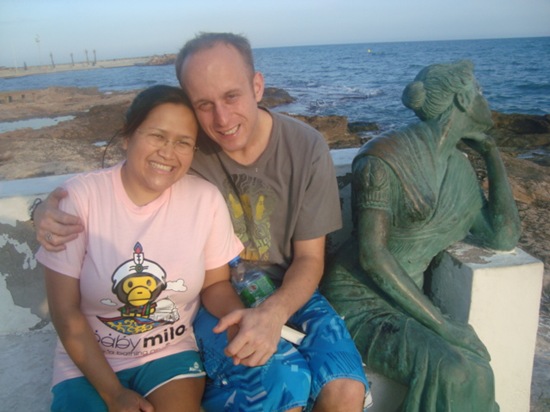 We got some ice cream and walked more.  We came upon some totem poles. 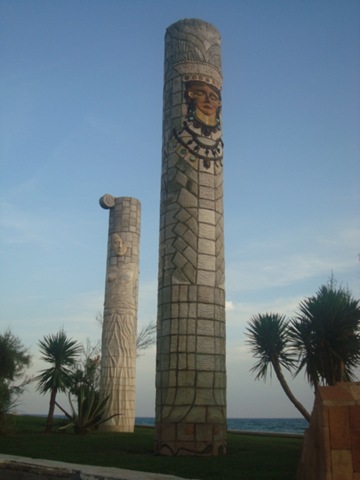 They looked really nice, but we couldn’t read the story behind them since it was in Spanish.

We drove to Giovanni for dinner.  It’s an Italian restaurant.  Ivan started off with a tomato soup.  Ivan got a salmon pasta which was really salty.  Jennifer ordered an aubergine and mozzarella pasta. 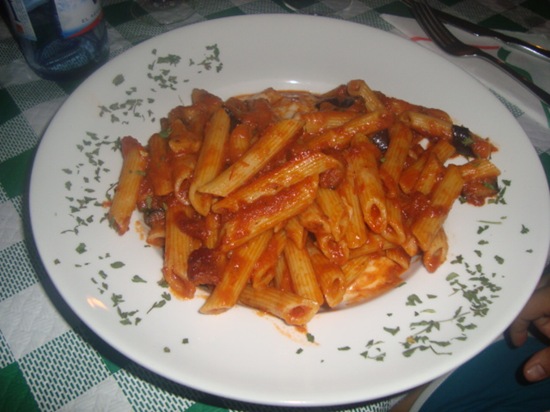 I had a nice banana cannelloni.  The food was alright.  Our server wasn’t very nice to us.

Next, we went bowling.  We played one game.  Jennifer came in first and sadly I came in last.  We all played some arcade games.  Neal wanted to get a prize.  We kept getting more tickets.  Neal won a little ball.  We drove back to the villa.  We had a good day.

Ivan, Jennifer and I got ready for the day on October 2, 2009.  Everybody got into the car and we drove to Calpe.

We walked along the seafront.  We got lots of free samples of food and sangria at the restaurants we walked by.  They all want your business. 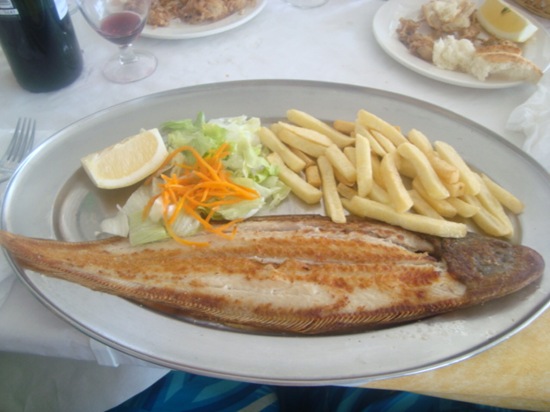 The fish were very plain.  It was an average meal.

We walked to the beach. 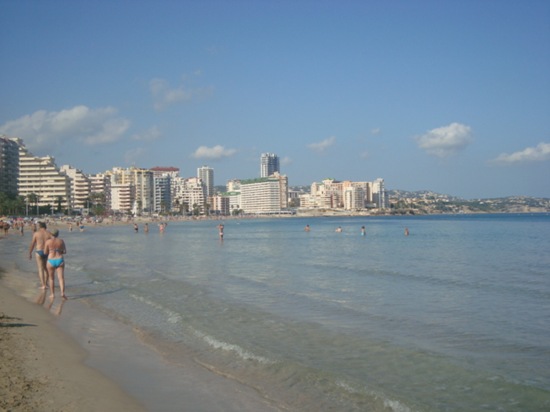 Everybody went into the water except me.  Ivan, Ivan’s parents and Jen played ball.  It was a round object that had velcro and the ball would stick to it.  It was good fun.

Ivan bought a bucket and spade.  He started building a sandcastle. 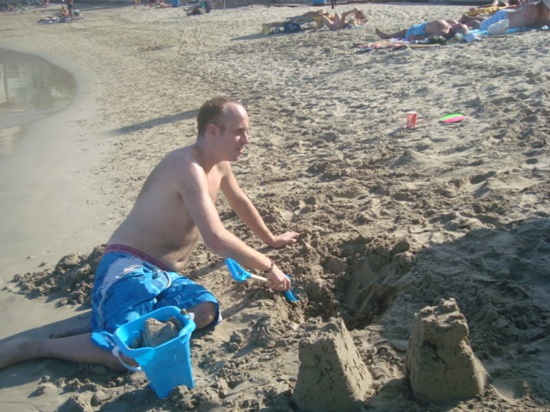 Everybody then made their own sandcastle. However, the bucket wasn’t really that useful – the sand kept on getting stuck to the bottom of it, so the sandcastles turned out looking a bit pathetic.

We drove up to the rock.

Neal wanted to climb it.  Ivan and Jennifer thought it was too hot to climb up.  Jennifer doesn’t like climbing since she has bad ankles.  Ivan, Jen, Ivan’s mum and I walked up to the viewpoint.  It’s pretty up there. 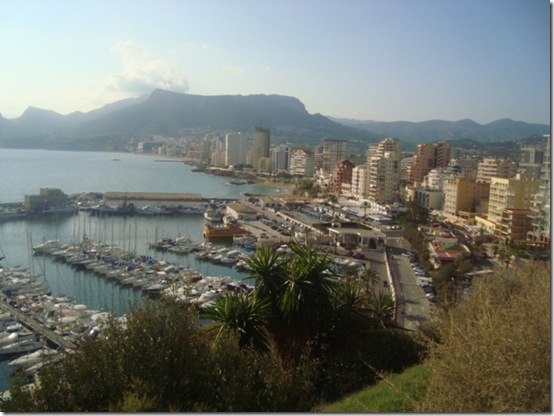 Ivan’s dad and Neal disappeared on us.  They started walking up the rock.  We weren’t sure how long they would be.  We wanted to sit down.  Ivan wrote a note that we’d be at a cafe drinking tea and placed it on the car.  Hopefully, they would see it.

We walked to a cafe.  We had a cup of tea.  Ivan’s mum ordered a nice Bakewell tart.  Ivan headed back to the car to see if Neal and Ivan’s dad were back from their climb.

Ivan’s dad picked up me, Ivan’s mum and Jen.  Ivan’s mum saw an ad that there was a beer festival.  We saw signs but we weren’t sure of the location.  We drove around.  Ivan asked a few people and they tried to explain it.  We finally saw a sign pointing to it.

We arrived at the German beer festival.  They were only serving one brand of beer.  Neal got a lager and Ivan and Jen got a glass of red wine.

There was a good band on.  Ivan, Jen and Neal ate a pretzel.  Ivan and Jen tried the wheat beer.  Ivan’s parents left to drive around. 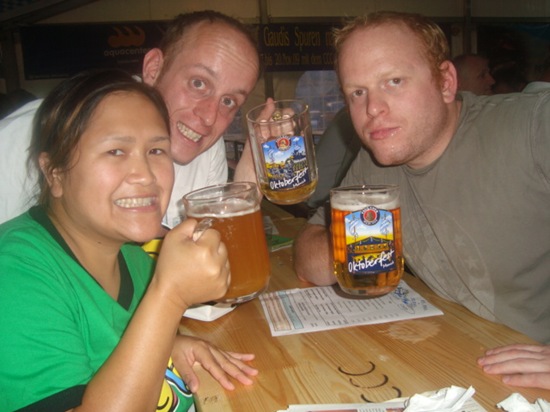 We had fun at the festival.  Ivan and Jen really liked the smoked salmon rolls they were served.  I had a few banana rolls.  We bought some silly hats and wore them. 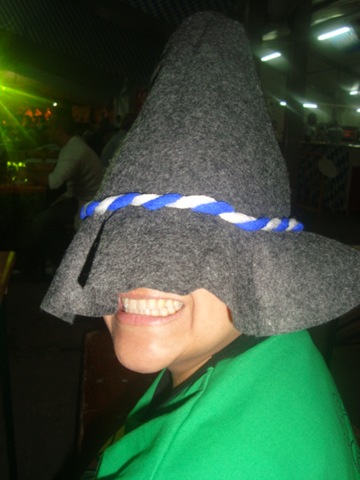 I think they were made of wool – so it was hot wearing them.  Ivan’s mom came and said we should go.  It was a long drive back.  We wanted to stay.  But, we left early to head to the villa.