Ivan, Jennifer and I had some breakfast at the villa on October 3, 2009.

Everybody got into the car.  Ivan’s dad drove us to Guardamar.  We walked around.

We stopped at Restaurante Esplanda for lunch.  I had a banana pizza.  Ivan got had white tuna.  Jennifer ordered prawns in garlic.  The food was only average.

Ivan wanted to find an internet cafe.  Everybody used the internet.  It was the first time using it since arriving in Spain.  Ivan, Jen and I used it for a long time.

We drove back to the villa.  Ivan, Neal, Jen and I played Trivial Pursuit.  Ivan won the game and I came in last place.  I don’t know much trivia unless it deals with bananas and monkeys.

Jennifer and I stayed to have a rest.  Everybody else went back to Guardamar.  Ivan used the internet.  They also stopped by the beach.  Neal went swimming.

That evening, we went to Torrevieja.  We had dinner at Restaurante Vegetariano.  Ivan and Jen started off with dips with pita bread.  Ivan’s parents ordered tasty parmesan bread.  Ivan and Jennifer shared eggplant dish for a starter. 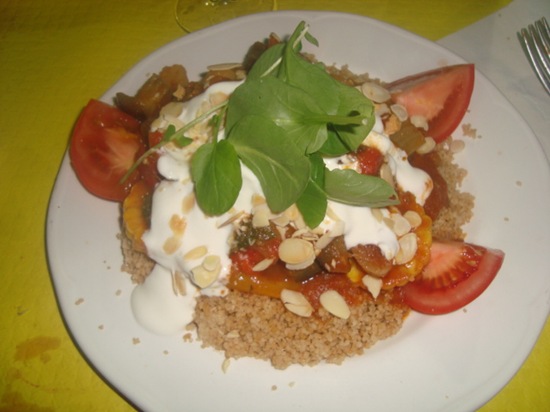 They shared a tangine for their main course.  I had a banana ziti.  The sangria was very tasty there.  Everybody shared the blueberry and apple crumble for dessert.  The food tasted excellent.  It was a great meal!

After dinner, we walked around.  We found a fairground.  Ivan, Jen, Neal and Ivan’s dad rode the bumper cars.

We drove around Guardamar.  We were trying to find the 60’s music band that was playing.

We found it by the church.  It was Spanish 60’s music.  A lot of people were dancing.  We watched for a few minutes.  Then, we headed back to the villa to get some rest.

We took Neal to the airport.  He was flying back to London.  We changed to a smaller car at the airport.

We went to Alicante.  We went to La Terracita for lunch.  Ivan, Jennifer and Ivan’s mum shared some potato bravas.  Ivan and Jen each got a chicken sandwich.  I had a banana sandwich.  It was alright.

We saw some statues on the pier.  Ivan really thought one of the statues looked like Stewie from Family Guy. 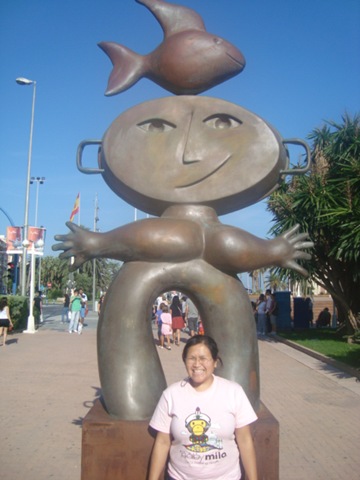 We took a walk along the pier.  It is really pretty there. 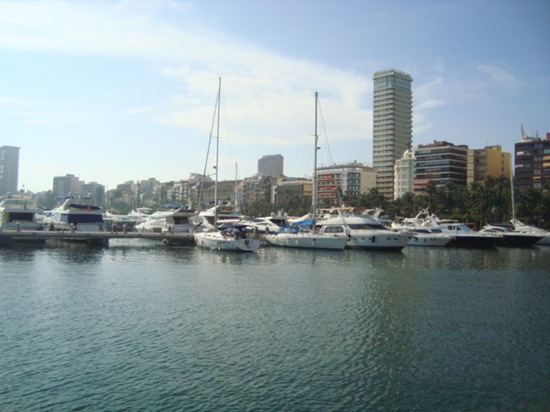 We saw a casino.  The weather was really nice out.  We wanted to have ice cream but we couldn’t find anything that looked good.

We drove back to the villa.  Everybody chilled for awhile.

We got in the car headed to the Vegetarian restaurant.  Ivan’s dad got mad at Ivan and he started headed back.  He dropped us off an area with a few restaurants in it.

We ended up going to 222 Italian Restaurant.  Ivan and Jennifer shared a soup of the day.  It was weird and tasted like egg drop soup but the broth was really plain.  I had a great banana pizza.

Ivan and Jennifer shared a onion and mushrooms pizza and ricotta cheese tortellini.  The food was very tasty.

Ivan’s dad picked us up and we headed back to the villa.  We’ve enjoyed our time with Ivan’s family.  Jennifer thought it was great being able to spend more time with them.