Today, we would be headed on a boat to the Whitsundays.  We went to Peter Pans to store our luggage.  This is the company we used to  book our Fraser Island/Whitsundays package.  So, we had already paid for the luggage storage ahead of time.

We walked around the town.

We had lunch at Fish D’vine.  Jennifer got the spicy Thai snapper.  Ivan got the Cajun Spanish mackerel.

It came with a salad.  The mackarel had more flavor.  I got a tuna with bananas.   It was expensive for a restaurant that’s located in a food court.

We walked a long way to our meeting point.  We got to Gloria’s Cafe a few minutes before 1:40 pm.  We signed in.  A few minutes later, we boarded the Atlantic Clipper.  It was a really big sailing boat.  We would be staying on it for two nights. 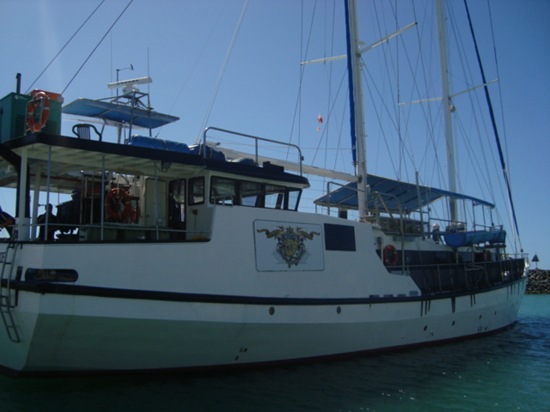 It was nice to soak in the sun on the top deck.  Ivan and Jennifer had an apple.  Ivan ate some oranges.  I had a few bananas.

The group consisted of 30 people.  Everybody seemed to be chatting with each other.  We kept to ourselves and didn’t really talk to anybody.

Dinner was ready. We had told them in advance that we were vegetarian with chicken and fish, and that I eat a diet that is heavily banana influenced.

One of the guys on the boat told us the women would be served first and then the men, and then the monkeys.  The dinner was fish, mashed potatoes and salad.

Ivan ate lots of tasty fish.  I had a banana and fish sandwich.

It was drinking time.  Ivan and Jennifer started drinking some goon (cheap Australian wine).  I had a banana and strawberry juice. 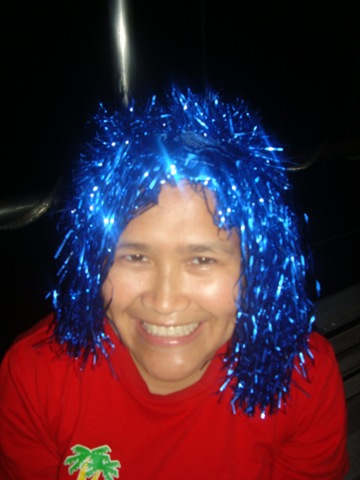 We decided to sleep early around 10:30 pm.  Ivan was really tired.  Jen stayed up reading the book Cradle and All for an hour.

We were taken by small boats to Tongue Bay.  We walked to an overlook.  It was a long walk there.  The view was alright. 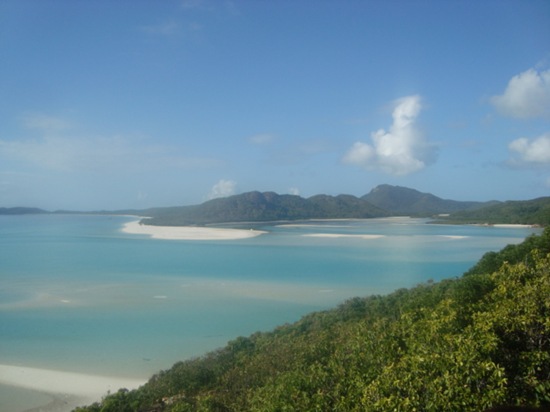 Then, we walked to Betty’s Beach.  The sand is made of silica.  It’s really fine.  One of the crew said it polishes up silver.  Ivan and Jennifer polished up the rings they created in Ubud.  We relaxed on the sand.  Ivan and Jen went in the water. 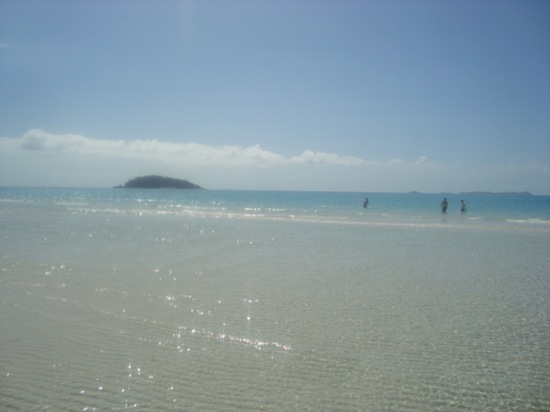 We got back on the boat.  Soon, it was time for lunch.  It was two different types of cold pasta with wraps.  I had a wrap with bananas and pasta.

Ivan went diving at 2 pm.  People went snorkeling.  Jennifer missed the snorkeling since she took a nap.  Ivan enjoyed his diving.  There was a big groper fished nicknamed Elvis that followed them around. 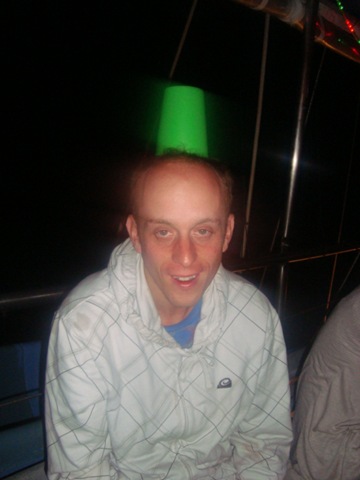 There was a game set up by one of the crew.  People had to pick up a goon box with their teeth.  They couldn’t touch the ground with their knees or hands.  If they failed, they got a spanking.  It was a funny game but not a drinking game.  I really wanted to play, but they said it would be way too easy to me as I dont have to bend down much to reach the ground.

Everybody started chatting and some were playing drinking games.  Ivan and Jen drank some goon.  We went to bed around 11 pm.