Ivan, Jennifer and I woke up early on September 2, 2009.  We had breakfast in the kitchen.  Ivan left milk we had brought for the other travelers.  I left a banana for any monkeys to have.

We were picked up by the Oz Experience bus at 8:30 am.  Our driver Keno picked up other people at a different hostel.   We surprised to see that our group contained 18 people and 1 monkey.  Usually, it was only 4 people or so.

We drove for awhile.  We were driven out to the Outback to the Kroombit Cattle Ranch station.  We arrived there about 1:30 pm.

Lunch was ready for us when we arrived.  Ivan had a tasty veggie burger.  Jennifer had a chicken schnitzel sandwich.  I had a grilled banana sandwich.

We checked in and then shown to our private room.  It had a bunk bed with a double bed on the bottom and a single on top.

Ivan and Jennifer were headed to go horse riding.  I decided to sit behind Ivan since he’s the better at horse riding.  Ivan’s horse was named Bundy.  Jennifer had one named Jude.  We got on our horses and set off.

We would be mustering (herding) the goats.  Jennifer’s horse seemed a bit lazy and kept eating grass.  We rode out to where the goats were eating the grass. 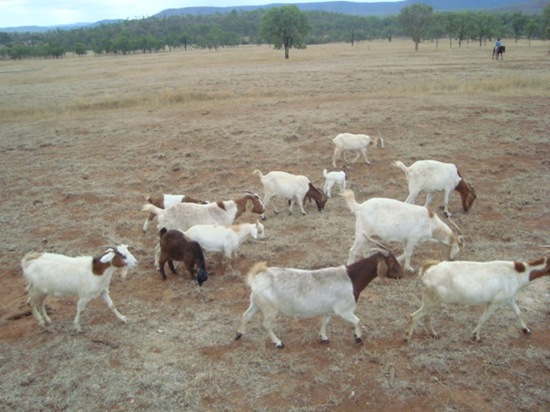 We had to make sounds and make sure the goats were headed in the right direction.  It was really hard work!  There were some stragglers and we had to make them start moving. 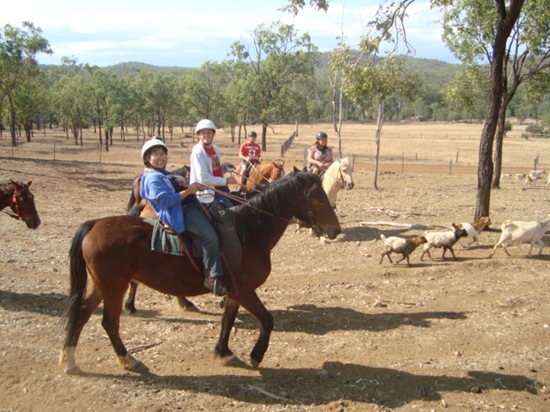 Jennifer’s horse, Jude, didn’t seem to listen to the commands he was given.  The little baby goats were the cutest.  It was lots of fun mustering the goats.   It seemed to take awhile doing it though.

We got all the goats in the holding pens.  We rode back to the cattle ranch.

The people on the ranch had a baby kangaroo.  There was an car accident and the mama kangaroo died.  The baby was really cute.  It hopped around slowly. 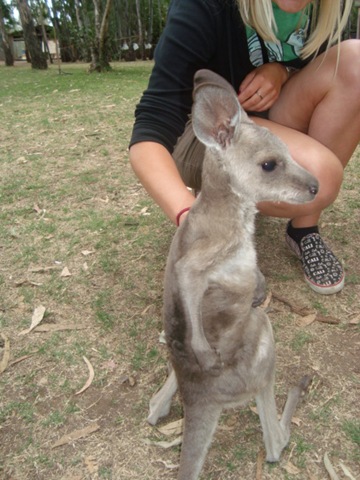 Most of the group hopped on the Oz Experience bus.  Andy told the horse riders that our reward was getting in the truck to the goat rodeo.  It was a really fast and bumpy ride.

It was time for shooting a rifle to hit clay pigeons.  Only a couple people signed up for it.  Jennifer was the only girl.  It included 5 shots for $10 AUD.  Ivan went first and he got 3 out of 5 hits.  Jennifer went next and she also hit 3 out of 5. 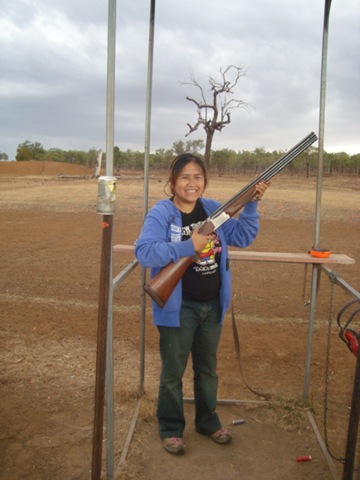 They thought it was cool shooting the clay pigeons. I really wanted to have a go myself, but they told me that I was too young, and too much of a monkey to be able to shoot a gun.

Next, it was time to try lassoing.  Ivan was doing alright.  Jennifer couldn’t do it at all.  They tried practicing, but it was a bit hard.

Ivan wanted to catch a goat.  The people at the ranch didn’t seem to like doing the goat events.  But, we insisted.

We got into groups of three.  We got a quiet guy who Jen thought looked like Lurch from The Addams Family.  Andy said we had to choose a name for our group.  Ivan thought The Three Amigoats would be good.  Then, they had to choose either C, M or D.  Ivan picked C, Jen got M and the quiet guy got D.  Ivan figured out that it was Catch, Milk and Drink.  So, the teams had to catch a goat, milk it and drink the milk.  The groups were competing for points.

Ivan was running around to find a female goat.  He got one.  Jennifer tried to milk it but nothing was coming out.  Andy came over to demonstrate.  Ivan got another goat and Jennifer finally some milk out.  The quiet guy refused to drink it.  Ivan drank it instead.

There was another goat game.  This time we had to lasso a goat.  Then, another person puts the goat on its side.  The last person brands the goat.  Of course the brand isn’t hot.  Ivan kept trying to lasso a goat with no luck.  He was told he could catch one. 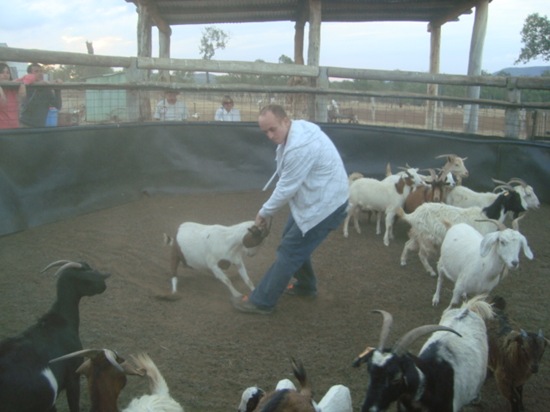 He got one and dragged it to Jennifer and the quiet guy.  The guy put the goat on its side.  Then Jennifer got the brand and accidently hit the guy and then branded the goat. 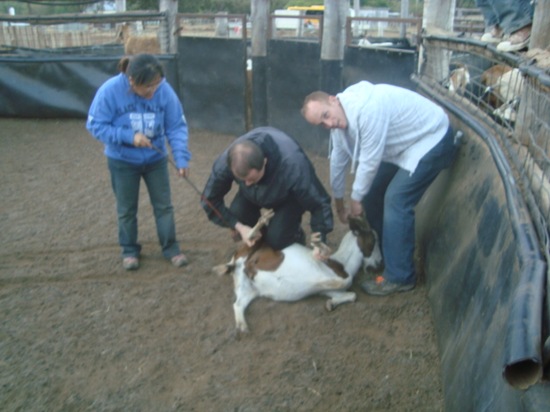 They got points but some were deducted since Jennifer branded her teammate.

The next game was called circle of fire.  The group held hands and two people were chosen by spinning a bottle.  Then, Andy would have the two people hold a two metal rods.  The current would go through the whole group.  Ivan, Jennifer and the quiet guy thought that was a stupid game.  Ivan and Jen didn’t like electric shocks at all.

We went back to the bar for drinks.  Ivan and Jen got a bottle of red wine for $9.  It was Happy Hour prices for wine all night.

Dinner was served next.  I got a banana stew.  Ivan and Jennifer ate the tasty vegetable stew.  They weren’t sure if there was more food, so they had seconds.

The main course was next.  I had a banana quiche made for me.

Ivan and Jennifer each had a good vegetable quiche.

Al was an old guy who worked at the ranch.  He told us that it was time for face painting.  He said everybody needed to have at least some paint on their face.

Ivan drew a Nazi sign and Whites Rule on Jennifer’s face for a joke.  But, nobody seemed to get it.  I don’t know why though. 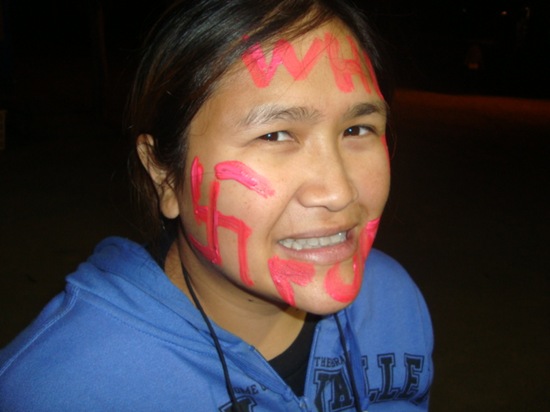 Jennifer’s Asian, so she wouldn’t be a Nazi.  Everybody kept having the reaction of Oh, that’s a bit too much.

Jennifer made Ivan into a clown at his request. 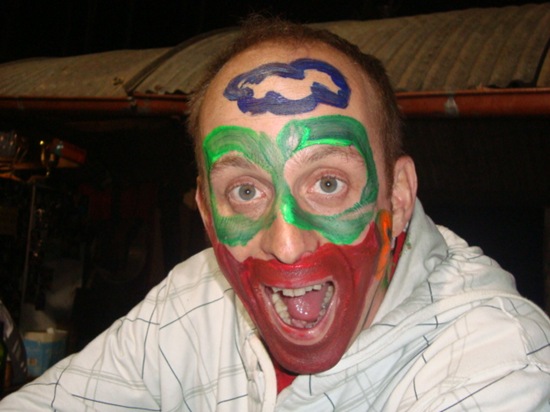 I didn’t get mine painted because I would have looked ridiculous – plus the paint would have been a pain to get out of my lovely fur.

Al gave us a talk about Kroombit.  It was really boring and seemed to sober up Ivan.

Ivan and Jen drank some wine.  I had a cup of banana juice.

There was a talent show.  We didn’t really watch it though.  A guy who walked over hot coals won.

We were taken to try out whip cracking.  Al was helping people out.  He cracked the whip so easily and loud.  Ivan got a few cracks in.  Jen couldn’t get a crack at all. 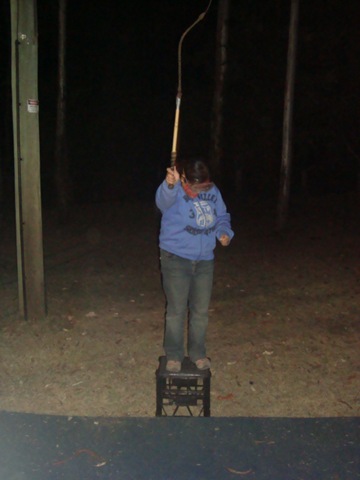 It seemed really hard to do.

We decided to go to bed.  We had a fun filled day and we were real tired.