Ivan, Jennifer and I checked out of the Friendly Hostel on September 1, 2009.  The friendly guy who runs the friendly hostel drove us in the van to the bus station.

We stopped for lunch at Bundaberg.  Ivan and Jennifer wanted to try out Fruit 2 Juice for lunch.  Ivan and Jen each had a lovely chicken and avocado wrap.  My wrap was a nice banana and chicken wrap with teriyaki sauce.  Ivan ordered a shake but before he could request no sugar, the lady put a bunch of ice cream.  It didn’t taste too good.

We arrived in the town of 1770 around 1:45 pm.  We checked in to 1770 Backpackers.  There were no private rooms available.  The lady who checked us in was really nice.  She let us have a ten bed dorm to ourselves.

Ivan had set up to do the scooteroos.  Scooteroos are miniature Harley Davidsons.  Jennifer was scared to drive it and wanted to ride behind Ivan.  I thought I could catch a ride and squeeze myself in between Ivan and Jen.

We were picked up at 2:30 pm at the hostel.  We were driven to Scooteroos.  They told us that we should grab a helmet and pick out a leather jacket.  There were no monkey-sized helmets so I had to make do without one.

Ivan hopped onto a scooteroo and then we got in behind him.  It was a really tight fit.  There’s a bar behind the second seat that holds the license plate number.  There would have been plenty of room if it wasn’t there. 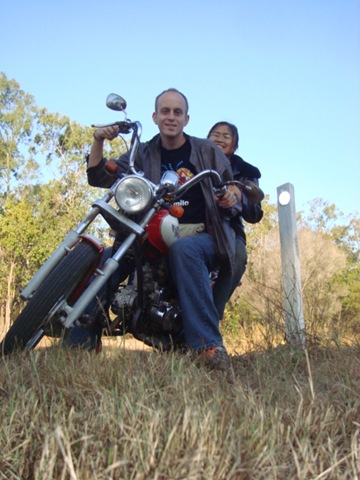 We drove around the town of 1770 on the Scooteroos.  Since we had a lot of weight, we were usually the last of the group.  I know Ivan wanted to go a lot faster.  He loves driving fast.  It was a scenic drive around the town.  It would have been nice to drive right near the sea.

We stopped for a break to have potato wedges.  I got banana wedges, but it was just a fancy name for banana slices.  We sat on the rocks and watched the sun set.

We rode back to the Scooteroos place.  The ride was alright.

I guess it’s because we’ve ridden lots of motorbikes and seen lots of countryside – so the ride was nothing special for us.  A van took us back to the hostel.

We chilled and used the internet.

We walked around to find a restaurant for dinner.  We decided on Agnes Tavern.  I had a nice dish with chicken stuffed with bananas.  Ivan and Jennifer shared a smoked salmon salad and a trout with a great buttery sauce with prawns.

We walked back to the hostel after having a drink.   We went to bed early since we had another early start.