Ivan, Jennifer, and I had the free breakfast buffet at the hotel on June 30, 2009.  There was lots of mozzarella cheese at the buffet.  I think Jennifer ate too much of it.

We took a Plantation tour. 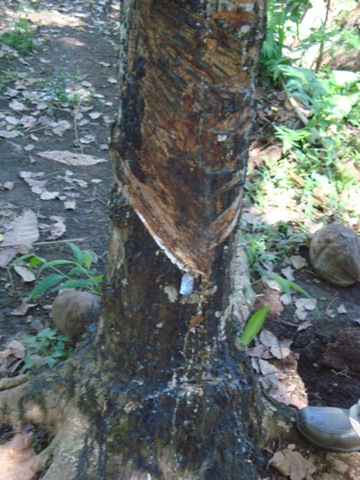 Our guide showed us coffee trees, rubber trees, pepper trees, and a guy climbing a palm tree.  We got to climb the trees.  I shimmied up the palm tree very fast.  Ivan and Jennifer didn’t get very far up. 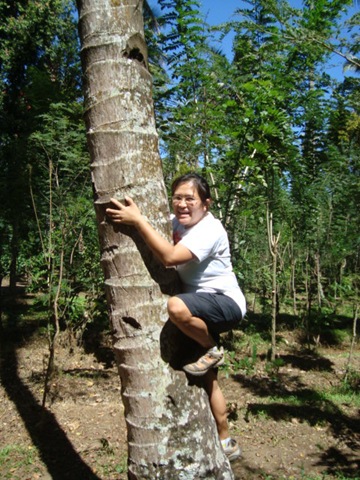 The guide showed us the inside of the things like a cocoa pod.  It was an interesting tour.

We packed everything up.  Jennifer’s stomach started feeling bad.  She took some medicine for it. 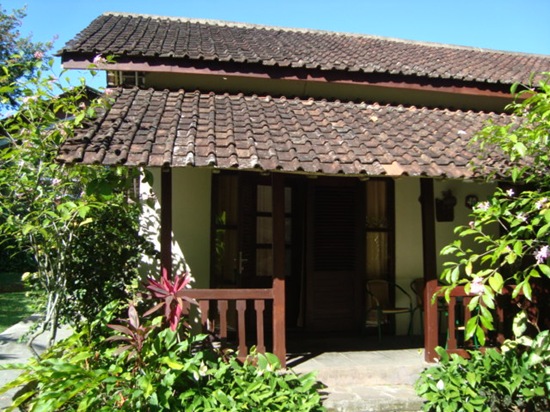 We checked out of Margo Utomo Hotel and Resort.  We had a nice stay there. 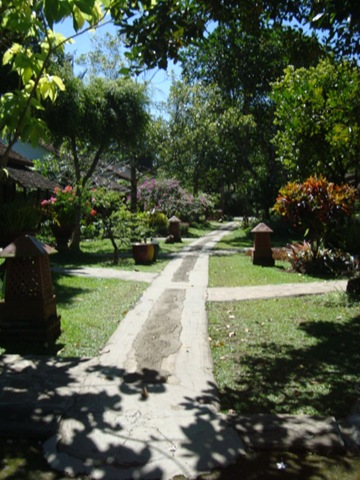 The surroundings are beautiful.

We had lunch at the restaurant.  Ivan and Jen both got the chicken sandwich.  I had a nice noodle dish with chicken and bananas.

We were about to leave.  Ivan and Jen started watching Rock N’ Rolla on the laptop.  The mini-van started having problems.  The guy was trying to fix the engine.  Ivan asked the guy if he could get a friend to take us.  The guy said that his friend wanted 700,000 IDR.  Ivan said No, we’ll only pay 500,000 IDR.  He said his friend would come soon. It was an hour later now – about 8:30 pm.  The guy with the car problems wanted us to pay him and he’d give the money to his friend.  Jennifer thought that was shady.  Ivan said No, we’ll pay your friend.  We got into the new car with two guys.  Their car was nicer and would hopefully take us there faster.  The only bad thing was they had some parts that were sticking out into the backseat.  Jennifer had to sit awkwardly against the window (because of the parts) since she wanted to rest.

We stopped at a warung for dinner.  Ivan and Jennifer had Nasi Goreng with chicken for dinner. 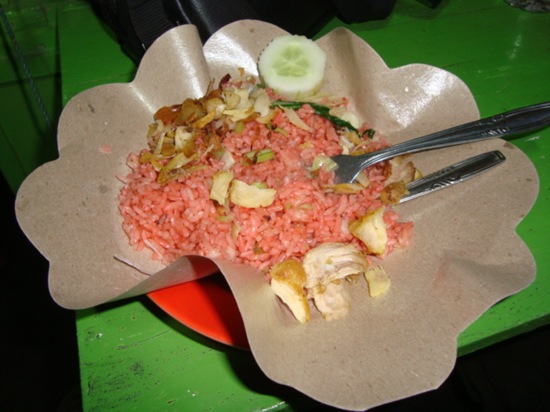 The rice was pink because of the tomatoes.  It didn’t taste like tomatoes though.  I had noodles with bananas.

We started heading towards Ubud at 9 pm.  Ivan and Jennifer finished watching their movie.  I just laid down to rest.  Jennifer felt a bit nauseous.  She laid next to the window with the window open.  She hoped the fresh air would help her feel better.  The ride only took 2 1/2 hours.  We arrived at 11:30 pm.

We checked in to Honeymoon Guesthouse.  The guesthouse is located in a temple.  It’s beautiful!  Ivan and Jen ordered breakfast for the morning.  They bring the breakfast at the time you specify.  We were so tired from our long journey – so we went to bed.