Ivan, Jennifer and I had the buffet breakfast at the Atrium Cafe in the hotel on May 28, 2009. 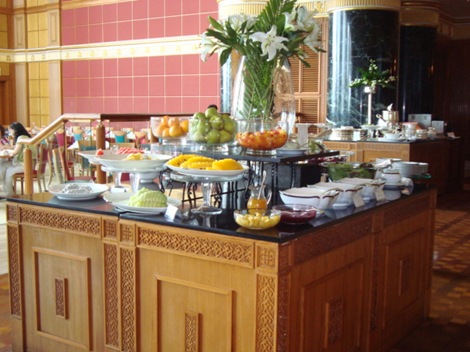 The food was nice again.  I had lots of small bananas and took some with me for later.

We packed everything up.  We checked out of The Empire Hotel.  We left our backpacks at the Bell Desk.  Ivan set up a private car going to Miri later.  It would pick us up at 7:30 pm.

We chilled at the pool on one of the big beds.  Ivan and Jennifer watched the movie Role Models.

I walked around and climbed up a palm tree.

The event for today was Tennis.  We took a buggy to the Country Club.  Ivan and Jennifer were given a basket of tennis balls, a new can of balls, two racquets, water, two small towels and an apple.  It’s too bad that they didn’t have monkey-sized tennis racquets.  I would have tried to play.  Ivan said thought they should play three games. 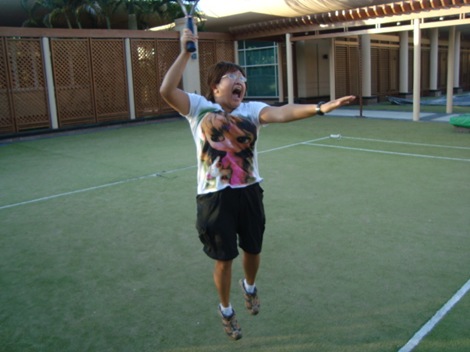 It’s been awhile since either of them played.  Jennifer played doubles tennis on her high school team. 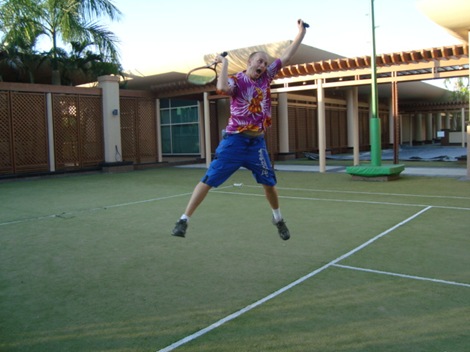 Ivan beat Jennifer 2 games to 1.  It was really tiring playing.  It was nice that they had a jug of water and towels to dry their foreheads.

Ivan ordered the set menu which includes the anti-pasti trolley, a main course and a dessert.  Ivan ordered a tuna pizza.  I ordered a banana pizza while Jennifer got tagliatelli with mushrooms.  Ivan and Jennifer shared everything.  The trolley had so many anti-pasti likes vegetables, cheeses and smoked salmon. 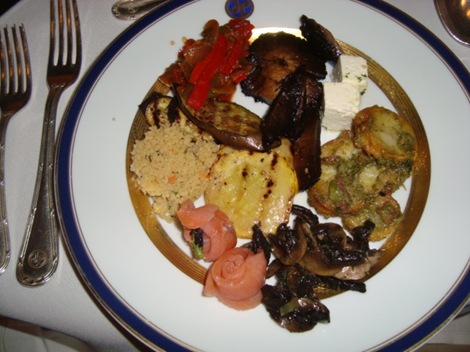 Ivan filled up a plate of good things.

The pizzas were tasty and cooked to perfection.  The tagliatteli was light and yummy.  The chocolate fondant was ordered for the dessert.  I got a Banana Fosters and it was really good!  Ivan and Jennifer loved the chocolate fondant. 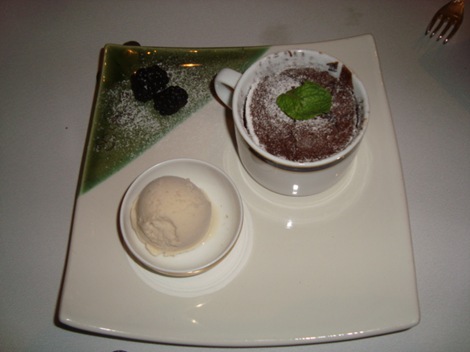 The outside was crunchy and inside it was very warm and chocolaty.  The fondant went perfectly with the ice cream.  It was a good way to end a great meal.  The food was really inexpensive – considering how good the quality was.

We grabbed our backpacks from the Bell Desk.  The driver was here to take us to Miri.  We placed our backpacks in the back of the car.  Ivan was editing Jennifer’s video on the laptop.  I just enjoyed the ride.  We had to stop at the border for Immigration.  Ivan and Jennifer didn’t even have to get out of the car.  They just handed over their forms and passports.  How easy is that!  It took us 2 hours to get there.

The car dropped off us near our accommodation.  We checked in to the Dillenia Guest House.  We got ready for bed and then fell asleep soon after.