Jennifer and I had breakfast at the coffee shop in the hotel on May 23, 2009.  Jennifer had the chicken porridge while I had the banana porridge.  We added a dash of soy sauce to our porridges.  The food was pretty good.

We both went on the internet in the room.

It was time to lunch.  We walked to the Warisan Plaza mall.  Jennifer walked around to find a place for lunch.  We sat down at Le Manila Cafe.  I ordered the noodles with bananas and vegetables.  Jennifer got the braised chicken with rice.  The food was only okay.

We walked across the street to the City Parade mall.  Jennifer did some shopping.

When we got back to the room, Ivan was in the room as he had arrived back from the mountain at 4:30 pm. We all sat down and listened to his story of what had happened on the mountain.

Ivan had arrived at the park office the day before, with no accommodation booked for the mountain. Most people book their accommodation weeks before as there is only a certain number of beds available, and they sell out quickly. However we don’t really plan much in advance so it was only a couple of days ago that Ivan had decided to do the mountain.

He had to wait for a while, but then he got lucky as someone from a group had pulled out, so Ivan took their accommodation. After paying for a guide and the permit he started walking up the mountain. The guide said he would go to the market to buy some fruit and would catch Ivan up – so at first Ivan was walking alone on the mountain.

Most people walk up in groups, but as Ivan had started so late most people had already started walking. However, Ivan didn’t mind as being alone meant he could go as fast or as slow as he liked. At first it was pretty easy and the first few kilometers were no trouble at all. Ivan even wondered what all the fuss was about as it seemed so easy. However as time went on, it got really really hard. There was endless steps that just seemed to go on and on and on. Ivan found it really hard, and was really glad when he finally reached Laban Rata which was the base camp for the night. The view from the base camp was quite amazing. 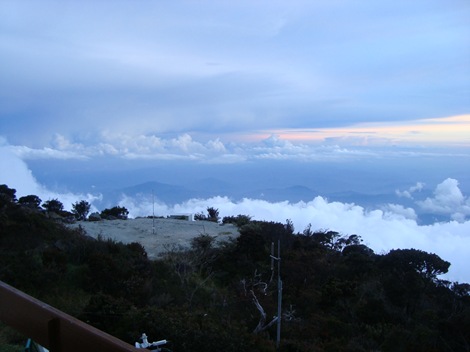 A buffet dinner was served, and after eating everyone went to bed as they were so tired. It was only 7pm – Ivan hadn’t been to bed that early since he was a kid! At 2am we all got up – to reach the summit you have to start early. After a quick bite to eat, Ivan started climbing to the top. It was really. The steps had disappeared, and now it was just a sheer rock face that Ivan had to climb. There were ropes to help, but the pitch blackness and coldness made it really really hard. Finally though, after a lot of climbing and about 4 hours, Ivan reached the top! 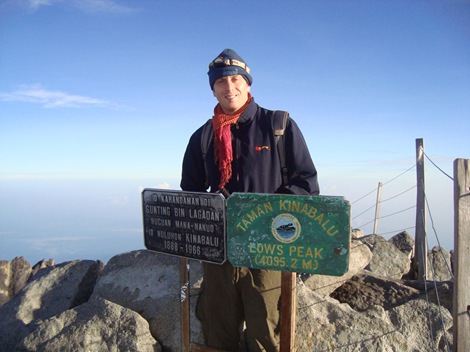 Getting back down again to base camp was no easier, but eventually Ivan reached base camp about 7am and went for some breakfast. Then, it was time to start walking again to the bottom. He was walking with this British guy called Raj who was walking really fast – almost running – and at first Ivan kept up and found it really easy. However, after a while his legs got tired and so he slowed down. The last few kilometers were really really hard. They just seemed to drag on and on and on. Ivan had to use the wooden banisters to support himself as he was walking down and he just wished he could be at the bottom as soon as possible.

When he finally reached the bottom, there was a buffet lunch waiting for him. He wolfed down quite a bit of food, and then got a ride back to KK with a friendly Dutch guy.

After I heard his story, both myself and Jennifer were really glad that we hadn’t of joined him. Even though climbing the mountain would have made me famous in the monkey community (I don’t think many monkeys have climbed the mountain), I think its something more suitable to my Dad, Big Dave.

Ivan and Jennifer threw me a surprise belated birthday party.  My birthday is May 10.  I think Jennifer forgot my birthday.  She said they finally had time to plan something.  I liked shooting the party favors. 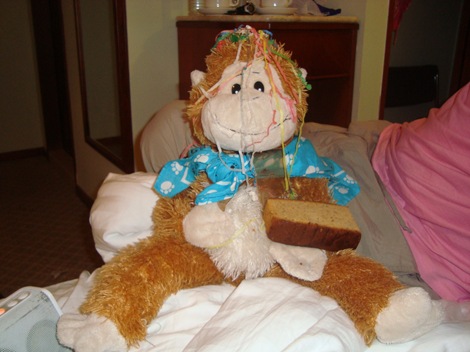 There was bananas and banana bread.  Ivan and Jennifer bought me a monkey bag.  I love it!  We had lots of fun.

We took a taxi to Little Italy.  Since it was Saturday, the restaurant was almost filled up.  We all decided to create our own pizza.  I ordered one with banana and chicken.  Ivan got a pizza with mushroom, roasted pepper and sundried tomatoes.  Jennifer got artichoke hearts, onions and marinated chicken. 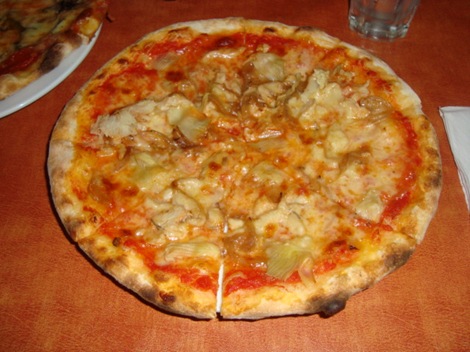 The best pizza was definitely Jennifer’s.  She thought her creation was really delicious.

Ivan was really tired.  So, we headed back to the hotel.

Ivan woke up feeling very sore on May 24, 2009.  His thighs and calves were in pain.  He could barely walk. We packed everything up.  We checked out of the Winner Hotel.

We were all hungry.  There wasn’t really anything good at the pier.  We walked down the street to find a restaurant.  We found a Chinese restaurant. 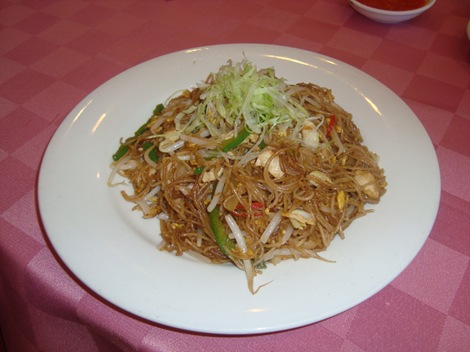 We walked back to the pier.  Jennifer bought some souvenirs in the shop.  Jennifer thinks Borneo has some great souvenirs.

We boarded the ferry at 3 pm headed toward Landau.  I listened to some tunes on Jennifer’s iPod.  Ivan and Jennifer watched the movie Planet Terror on the laptop.  The ferry ride took 3 hours and 18 minutes.

Landau is the stop before heading on a ferry to Brunei.  It’s known for buying duty free items like alcohol and chocolate.  There’s no alcohol on Brunei.  You can bring 2 Litres of alcohol per person but you must claim it.

Ivan saw a flyer about a hotel nearby.  We walked there.  We checked in to the Hotel Pantai View.  We chilled in the room for awhile.

We walked around to find a restaurant for dinner.  The lady at the hotel recommended a place but unfortunately there was a private party going on there.  We sat down at Fah Fah.  Ivan ordered a fish claypot.  Jennifer got the drunken chicken claypot.  I got a noodle soup with bananas.  Jennifer didn’t like the sauce of the claypot.  They add alcohol to the dish.  She just scooped up the chicken and ate it with rice.  Jennifer was still hungry – so she bought a instant ramen noodles.

We went back to the hotel.  Jennifer cooked up the instant noodles.  We went to sleep soon after.