Ivan, Jennifer and I checked out of the Li Hua Hotel on May 13, 2009.  We stored our luggage with the hotel.  Later, we were flying to Kota Kinabalu which is in the Sabah region of Malaysian Borneo.

We had lunch at Kheng Hock Cafe.  Ivan got the fish claypot while Jennifer got the chicken claypot.  I had noodles with bananas.  The food was good again.

The hotel called a taxi for us.  We took the taxi to the airport.  Our flight was at 3 pm.  We arrived there at 2:10 pm.  We checked our backpacks in.  We had to go through Immigration.  If you travel from Peninsular Malaysia to Borneo or the different regions (Sarawak and Sabah) in Malaysian Borneo you have to get stamped again.  The process was really fast though.  We left at 3 pm. 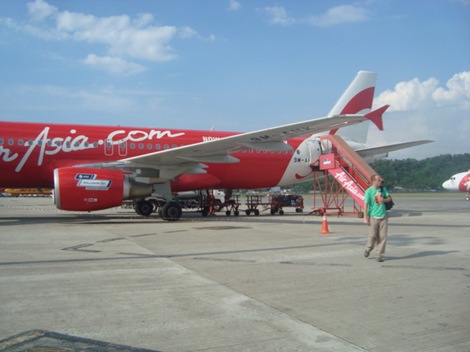 The flight was supposed to be an hour and 10 minutes.  The flight ended up being only an hour long.

We got a taxi to the lodge.  We arrived at the lodge at 4:35 pm.  We checked in to the Step In Lodge.  We were in a 5 bed dorm.  The private rooms were booked up for the night.  But, tomorrow we could move to a private room.  We relaxed in the lodge.  Jennifer was reading her book.

We walked by the waterfront.  We were thinking of having dinner at the markets.  Ivan said we’d do that tomorrow.  He saw on Tripadvisor that Kohinoor was a good restaurant.  We went to Kohinoor, a Northern Indian restaurant, for dinner.  We were seated outside facing the sea.  It smelled a little funny out there like the sea. 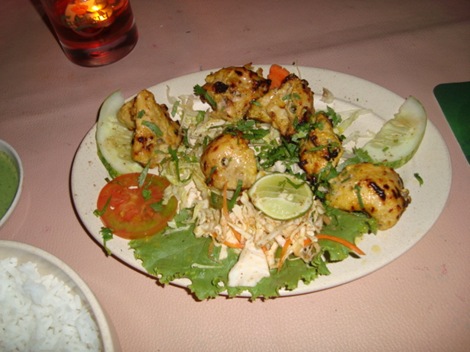 We walked to bed.  It’s a bar that stands for Best Entertainment Destination.  I thought it would have a bunch of beds inside like the supperclub.  It was a bar with tables and chairs.  Image Band were on.  It’s a band with three singers, a guitarist, bassist, keyboard player and a drummer.  The band comes from the Philippines. 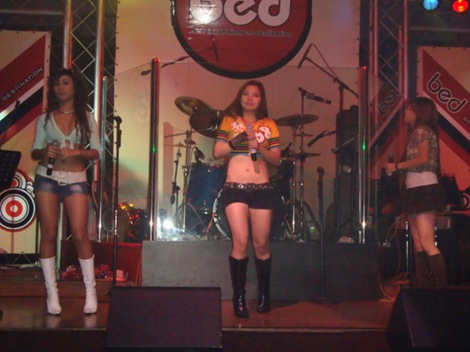 The band was popular since the singers wore tight clothing and were nice to look at.  They did sing good.  But, we thought it was alright.  Nobody was really getting into it and dancing.

We were thinking of heading back to the lodge.  Ivan heard live music coming from Rumba.  It sounded like music playing, but the band was so good they sounded like the band.  We stopped in to see Headhunters playing. 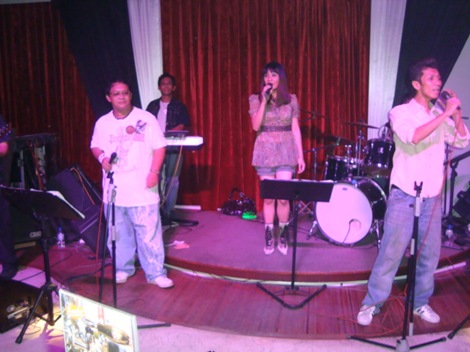 They’re really good.  They consist of three singers, one woman and two men, a guitarist, bassist, keyboard player and a drummer.  They sang songs from the 70’s, reggae and current songs.  People actually started dancing around.  Ivan thought it was weird that at both clubs we found tables right in the middle of the front row.  Ivan and Jennifer each had a white wine.  They watched the band for awhile.  Then, we headed back to the lodge to get some rest.

Ivan, Jennifer and I changed to our private room on May 14, 2009.  We had lunch inside the mall at Sushi King.  I had the tori teriyaki soba with bananas.  Ivan and Jennifer shared the eel and salmon sushi rolls.  Ivan got the mackerel. 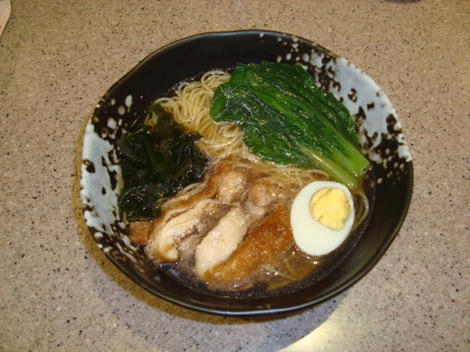 Jennifer ordered the shoyu ramen with chicken.  The food was okay here.

We walked across the street to the City Parade Mall.  Jennifer was in search of a place to get a facial and a wax.  She finally found one.  They also did haircuts there.  Ivan and I went shopping while Jennifer was busy at the salon.  Jennifer got a facial, eyebrow shaping, upper lip and a haircut for 85RM.  That was a bargain!

I worked on the blog with Jennifer.  I stayed in the lodge to read and work on the blog more.

Ivan and Jennifer walked to the movie theatre.  They went to see Angels and Demons.  They thought it was a good movie.  Ivan thought if you didn’t read the book, you might be confused.  It’s been awhile since he read it.

Ivan and Jennifer came to get me at the lodge.  We walked to the Filipino markets.  Here, they have a bbq market.  They have fish, crabs, chicken, prawns and shrimp that can be barbequed for you. 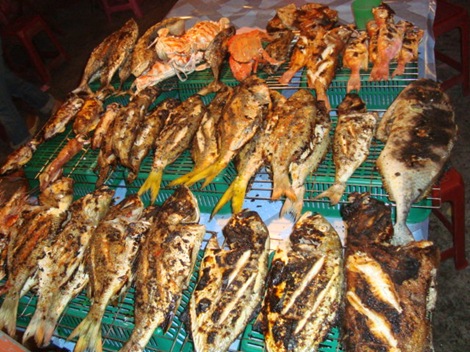 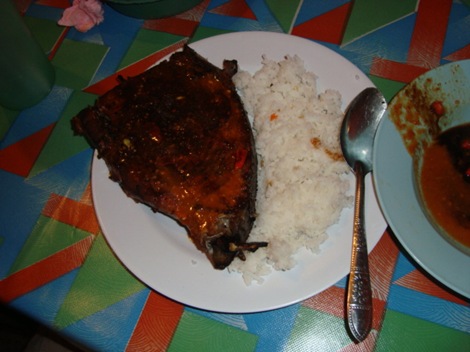 Ivan and Jennifer each chose a piece of tuna. They were both really big portions, but only cost about 4 US dollars each!  I got the chicken bbq with some of the bananas to be barbequed as well.  The restaurant provide you with a hot sauce.  If you want, you can add lime, sugar, salt and hot peppers to it.  Ivan mixed it all together.  The sauce alone was really spicy to me and Jennifer.  It tasted good with our bbq though.

We walked back to the lodge.  I worked on the blog some more.  Jennifer used the internet.  Ivan went to see Headhunters at Rumba again.