Ivan, Jennifer and I had lunch at the Island Cafe on April 3, 2009.  It’s located right across from our resort.  Ivan had a tuna sandwich.  I had penne with bananas.  Jennifer had spaghetti with basil and creme.

Ivan rented an ATV for the day.  We drove around exploring the island.  It’s safer being on an ATV compared to a motorbike.  It’s definitely more fun since it can go faster.

Ivan stopped at a place that has bowling and mini golf.  Ivan and Jennifer wanted to play a round of golf.  I wanted to play but the place doesn’t have monkey-sized clubs.  I was bummed.  The course has challenging holes.  There was one with a few bumps to get past. 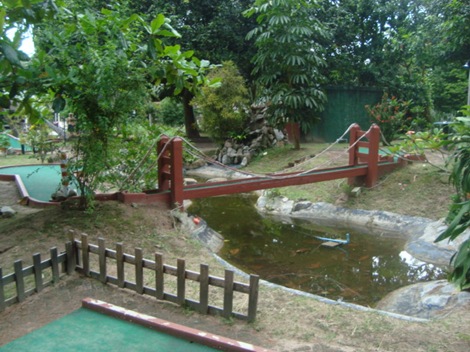 I liked the Golden Gate bridge and the Stonehenge hole.  I had a chance to play on a few holes.  I found a stick on the ground.  It didn’t work too well though.  It was still fun.  Ivan and Jennifer were competing against each other. 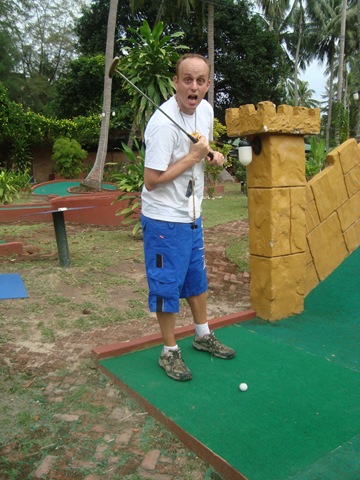 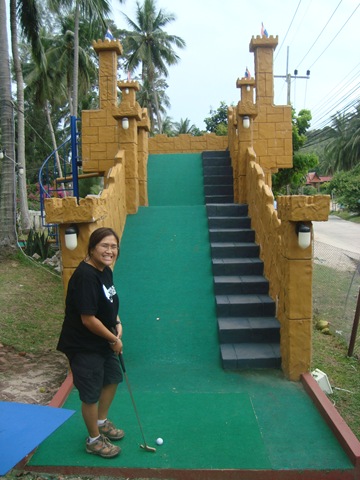 They were both sweating since it was hot and humid out.  The score was even so they called it a draw.

Ivan brought Jennifer back to the room since she wasn’t feeling well. Ivan and I went driving around on the ATV.  We rode around for awhile. 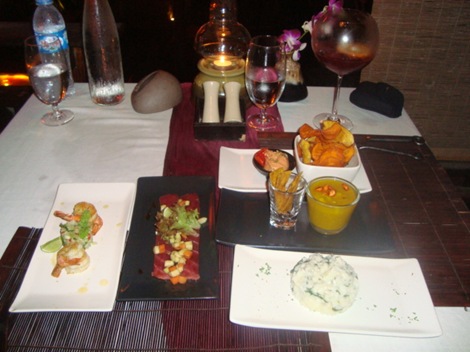 Ivan and Jen thought it tasted great.  Their favorite dishes were the spinach risotto, pumpkin gazpacho and the homemade potatoes chips.  Ivan and Jennifer each ordered a refreshing glass of red sangria.  The restaurant played some great songs.  I had to ask for some banana tapas made just for me.  I told them what I liked and they said they’d try to make some nice dishes.  I got a banana risotto, banana stuffed shrimps and a banana gazpacho.  The food was so tasty!  You’re supposed to share the tapas.  But, I didn’t want to share my good banana dishes at all.  Ivan and Jennifer ordered dessert – cubanitos with a mango salsa.  The cubanito is made of dark chocolate.  It was a nice way to end the meal.

Ivan and Jennifer wanted to check out the Dragon bar.  It was drum and bass night there.  The bar has some cool Asian decorations.

It’s more of a lounge place.  Nobody was dancing to the good music.  A few people were playing pool.  Jennifer got a Peachy Pussy drink.  Ivan ordered a Hairy Monkey.  I asked if I could get something similiar to Ivan’s drink.  The bartender made me the same drink without the alcohol.  He called it a Hairless Monkey.  The drinks were delectable.  We only stayed for a short time.