Ivan, Jennifer and I had breakfast at the Yorkshire Inn on March 24, 2009.  Ivan ordered muesli with fruit.  I got bananas with yogurt.  Jennifer got cornflakes with milk.  We packed everything up.  We were headed to Phi Phi Islands (pronounced Pee Pee Islands).

A driver picked us up at 12:20 pm.  It started raining really hard.  We hoped that the weather would be better on Ko Phi Phi Don.  Ivan got our tickets for the boat.  We had to wait until we boarded the boat. 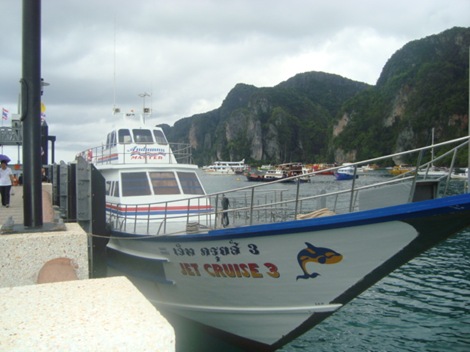 We got on the boat.  It was a big boat with air conditioning and nice seats.  The boat finally left around 2 pm.  The boat arrived on Ko Phi Phi Don at 3:30 pm.  Ko Phi Phi Don is one of the largest of the Phi Phi islands.

Ivan and Jennifer walked around the town to find accommodation.  Ivan didn’t want to walk far.  So, he settled on Marine House.  The room was alright.  It was nice that the hotel offered free wi-fi.

Ivan found a place for tomorrow night.  He also saw a restaurant with the best pad thai on the island.  We went to Paed Tai.  It’s a place run by a Thai lady.  She makes all the pad thai herself.  There are so many pieces of papers on the wall praising the pad thai.  Ivan and Jennifer each got a pad thai with chicken and egg. 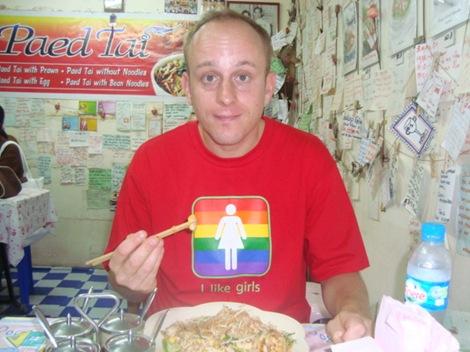 I got one with bananas.  It was really good!

We walked to Hood’s Bar.  The bar was showing Superbad tonight.  We sat right near the tv.  It’s such a funny movie!  We missed a few minutes of the beginning though.

We walked out of the bar and it was raining.  We walked down the street to an internet cafe.  Ivan, Jennifer and I each used the internet.  It’s expensive here it’s 2 Baht per minute.  We wanted the rain to stop before we headed out again.

We walked to Khun Va to get a small snack.  Ivan ordered a chicken satay while Jennifer got a fried chocolate ice cream 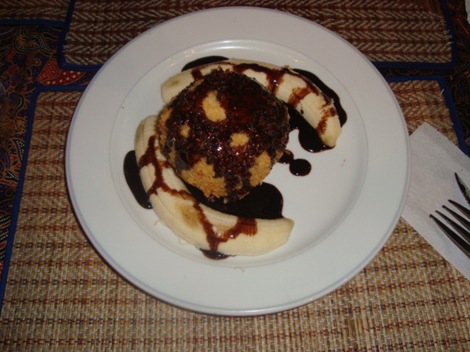 I had a banana split.  The food was okay.

Ivan wanted to check out the Muay Thai kickboxing at the Reggae Bar.  Ivan picked a table right by the ring.  He ordered a bucket for him and Jennifer.  A bucket is filled with whatever you want like Vodka and Red Bull or Smirnoff, Red Bull and Coca-cola. 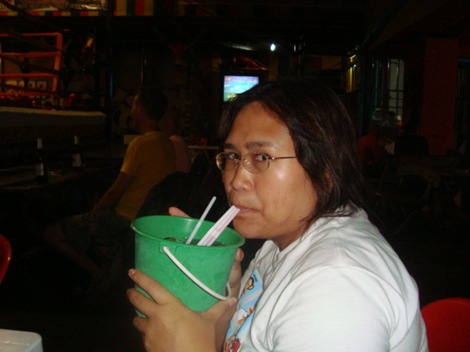 I got a great banana and mango juice.  The boxing is based on volunteers.  If you volunteer, you get a free bucket.  There’s three rounds.  Western girls were volunteering.  Some of the Western guys would play against a Thai fighter.  We watched a few fights.

Jennifer wasn’t feeling good.  So, we walked back to the room.  She got sick and threw up a little in the road.  Jennifer crashed out on the bed.

Ivan went out to the Rolling Stoned bar.  He read on the internet that there was a good band there.  The band was actually crappy.  He came back to the room to rest.

We checked out of the Marine House on March 25, 2009.  We checked in to the Pirates House. 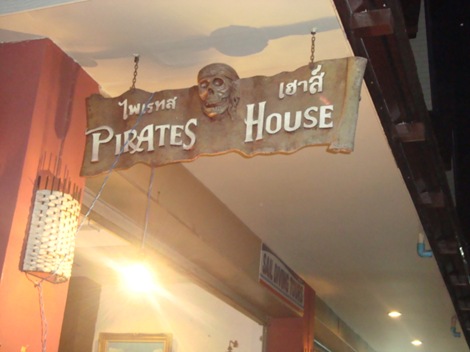 Ivan said it was pirate themed.  It really wasn’t.  Ivan asked one of the employees and he said the wall and the floor.  The floor was concrete and the walls were stone.  Jennifer saw a chair made of leather and then an ashtray that said Pirates House.  I think some swords on the wall might have been good.

Khun Va is right next door to Pirates House.  We sat down for lunch.  Ivan and I had porridge with bananas and honey.  Jennifer had the spaghetti with chicken.  The food was good.

We walked to a boat near the beach.  We were headed to a snorkeling tour.  Our first stop was Monkey Island.  We saw maybe a dozen monkeys living on the island.  The tourists give the monkeys bananas and pineapples.  These monkeys really do have the life! 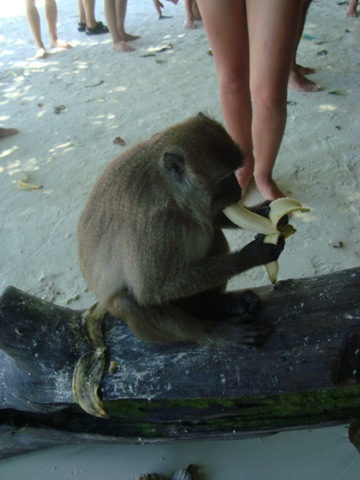 I wish I could just live on a beautiful beach and get free food all the time.  I saw a tourist give a monkey a Pepsi bottle.  The tourists don’t care about taking the bottle after the monkey is finished with it.  Ivan was getting mad at the tourists since there’s trash everywhere on the island.  One monkey kept refusing the bananas that we being thrown to him.  He was the banana quality inspector.  He really knew his stuff.  I grabbed some of the bananas he rejected.  They tasted okay.  I guess the quality inspector only wants the best quality.  I talked to one monkey.  He wished that the island was bigger.  He wished there was more room to play around.

Everybody went back on the boat.  We were headed towards a place to snorkel.  There were hundreds of fish in the water.  The water was a blue crystal clear.  Ivan and Jennifer went into the water.  The fish surrounded them.  It was cool seeing so many beautiful fish.

I floated around on a life vest.  I was tempted to put my hand in the water.  But, I was afraid a fish might bite me!  A lady on the boat kept feeding the fish bread.  All the fish started gathering around the boat.  The group got back on the boat.  We were headed to another place.

We snorkeled in a new place.  The fish were beautiful again and there were so many of them!  Ivan and Jennifer were happy to see so many fish.

Our last stop was Maya Bay.  It’s nicknamed ‘The Beach’ since the movie The Beach was filmed here.  The surrounding areas of Maya Bay are really pretty.

It’s not a really big beach.  There were many Western and Thai guys playing football (soccer) on the beach. 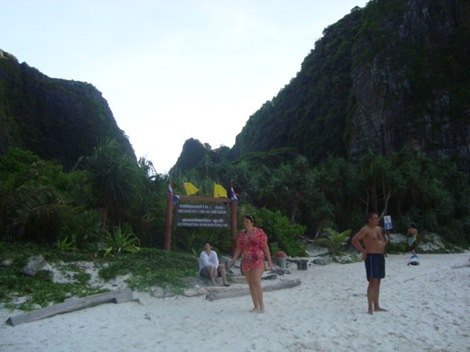 We boarded the boat. 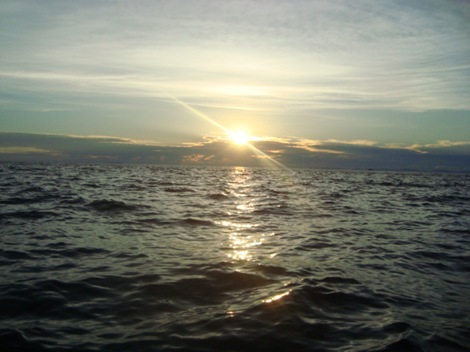 It was time to see the sunset.  It wasn’t that nice since it was cloudy.  We reached Ko Phi Phi Don a few minutes after the sun set.  We had a good day snorkeling and chilling.

Ivan wanted to eat Indian food tonight.  We walked to Hello India for dinner.  There’s lots of good food on the menu.  It’s a little expensive though.  Ivan and Jennifer ordered the garlic chicken kebab for a starter.  Then, they shared a garlic chicken curry with rice and a garlic naan bread. 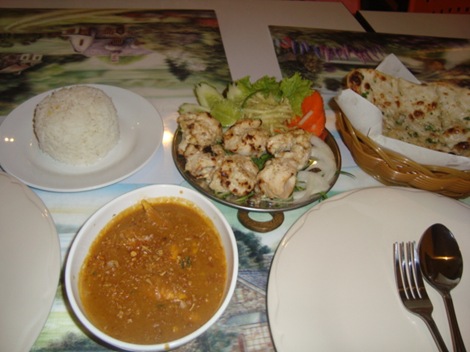 If they encountered any vampires tonight, the vampires could be dealt with, with just their garlicky breath!  I had a great banana naan bread with a chicken and banana tikka.  The food was delicious!  Ivan and Jennifer really enjoyed the garlic chicken curry.

We walked awhile to Hippie’s Bar.  A Malaysian guy was playing an acoustic guitar and singing some good songs.  Ivan found some seats right by the stage area.  We love hearing good live music.  Ivan and Jennifer were sharing a bucket.  I had a great banana and strawberry juice.  There was a break coming up before the fire show.

They had a Limbo contest.  Ivan thought Jennifer would be really good since she’s short.  She said she wasn’t good at limbo though.  I wanted to play, but it was only for humans not monkeys.  How disappointing!  It wouldn’t be fair though – since I could just walk under it. 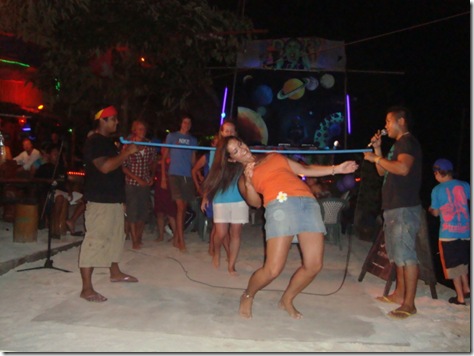 A Western girl won the contest and a bottle of vodka. 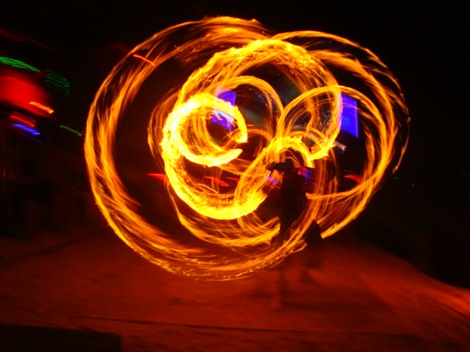 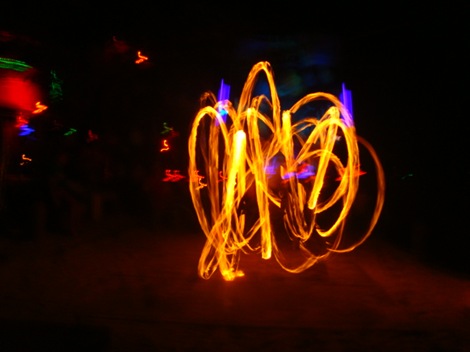 Since we had a front row seat – it was getting really warm!  Also, Jennifer seemed scared that one of the performers would accidentally let go of the batons.  It actually did happen but on the other side.  Nobody was hurt.  There was a finale in the fire show.  It was three guys twirling batons and balls at the same time. 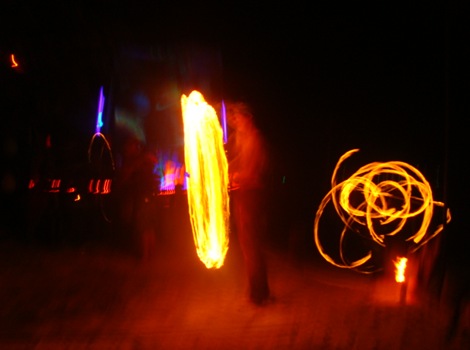 This was a great free show!