Drinking, Fighting and a Buffet

Ivan, Jennifer and I slept in on March 26, 2009.  We went to lunch at Lemongrass.  Ivan read about this restaurant online.  The Tom Yum soup and the green curry were recommended on that website.  Ivan and Jennifer each ordered the Tom Yum soup with chicken.  I decided to get it with bananas.  The soup was great!  It wasn’t too spicy either.

We went to find the Sunset Bar.  We went to the Viewpoint.  I guess it was the wrong one.  There were so many stairs going up.  Jen and I got frustrated and didn’t go all the way up.  We told Ivan we would head back.  Ivan said there was no Sunset Bar there.  We must have went the wrong way.

We went to get a leg and foot massage.  There’s one right by the Pirates House. 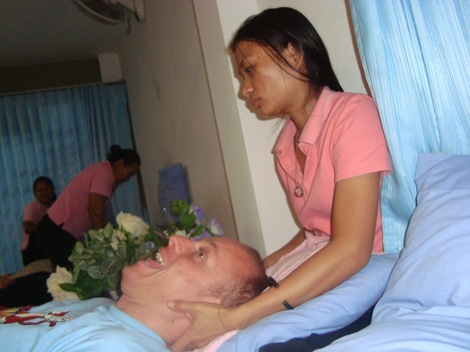 We all enjoyed the hour massage.  We definitely needed it after all that walking.

Ivan and Jennifer wanted to get Mexican food for dinner.  We went to Banana Sombrero.  Ivan had chicken fajitas.  Jennifer had shredded chicken tacos. 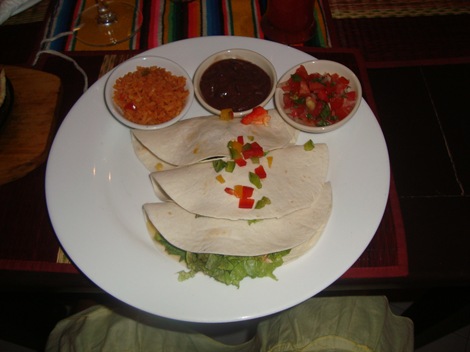 I got a chicken and banana quesadilla.  The food was okay, nothing special at all.

We went up to the Banana Bar.  It’s located on the roof of a building.  The bar gives out free banana shots.  I had a shot without alcohol.

I would have been happier if it was a free banana.  That would bring in the monkey crowd.  Although, I haven’t seen any monkeys on Ko Phi Phi Don.  But, maybe the monkeys from Monkey Island would come visit if there were free bananas.  They also ordered a shisha with strawberry and apple flavor.  I ordered a banana shake.  The drinks are really good.  Ivan and Jennifer sat on the big cushion bed and smoked shisha.  The music was really good tonight.  Jennifer was happy to hear a song by The Smiths.  She’s a big Morrissey fan. 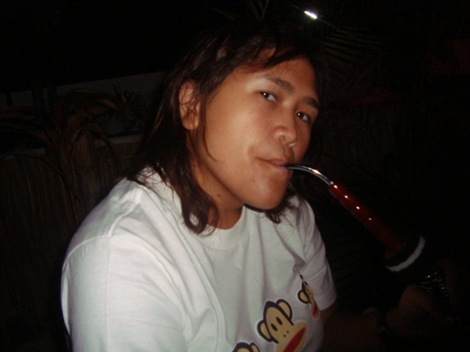 It was great lying down on the bar and staring at the stars.  It’s so nice that you can actually see all the stars in the sky.  Jennifer said she was thinking about volunteering at the Reggae Bar to fight kickboxing.  I thought she was out of her mind.  It’s only three rounds but it looks a little hard.  We stayed awhile at this cool bar.

Next, we headed to the Reggae Bar.  Ivan ordered water for us.  There was a fight going on.  A Western girl volunteered to kickbox.  She looked overweight and only a little taller than Jennifer.  Ivan pointed that Jennifer would fight against her.  Jennifer said yes.  She was handed a pair of Thai boxing shorts to put on.  She put it on over her yellow skirt.

Jennifer put on all the protective gear.  It was a helmet, gloves and these leg things.  Jennifer’s legs felt like jelly.  She was nervous.  The fight was going to be three rounds or until somebody got knocked out.  The fight began.  The Western girl just kept pummeling Jennifer’s head like it was a heavy bag.  It wasn’t fair at all.  This girl was crazy.  I mean truly a lunatic.  Jennifer kept trying to punch but wasn’t landing that many punches. 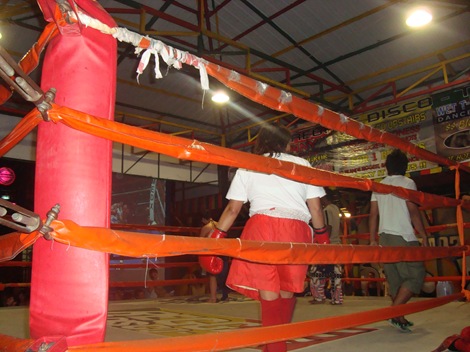 The bell rang.  Ivan was couching her and giving her pointers.  Jennifer said it was really hard.  It was the second round.  Jennifer wasn’t ready and fixing her helmet.  The crazy Western girl hit her and knocked her down.  What a stupid jerk!  How rude can you be?  The crowd started booing at the dumb Western girl.  Jennifer got mad at her and called her bad names.  Jennifer got knocked down.  It hurt her stomach.  She decided to give up since she wasn’t feeling good.  It was cool that she lasted a round and a half.  Ivan and I were proud of her.  Some of the crowd clapped when she came down from the ring.

Jen kickboxing at the Reggae Bar

Jennifer was feeling out of breath.  So, we headed back to Pirates House to get some rest.

Jennifer woke up feeling sore all over her body on March 27, 2009.  She wasn’t feeling up to going out for the day.  Jennifer and I stayed in the room.  Ivan went to Long Beach.  He took a 5 minute boat to get there.  Otherwise, it’s a 20 minute walk there.  Jennifer and I worked on the blog.  We went to lunch at Khun Va.  Jennifer had a chicken Pad Thai.  I had spaghetti with tomato sauce and bananas.  The food was alright.

Ivan found the Sunset Bar.  He had a few drinks there and watched the beautiful sunset.  There’s a pool at the Viewpoint Resort next to the bar.