I forgot to mention that I put a video of Ivan sawing wood at the Happy Valley Racecourse.  Check it out on the post called Buddha drinking tea while on a horse or on the video page.

We wanted to see more of Macau.  We had some sandwiches right by the hostel on October 14, 2008. The cafe had some awesome egg custard tarts. They’re even more delicious than the ones in Hong Kong! It’s a speciality here in Macau.

We decided to check out the Macau Tower. It’s 338 meters tall. We saw the beautiful view at the Outdoor Observation Deck. It’s actually not outdoors at all.

They have bungy jumping from that level and we saw two people jump. I don’t know how they do it! Jennifer was getting quesy just watching it. Another activity up on the tower is called Sky Walk X. You can walk around the rim of the tower (connected to a harness) where there’s no rails. We went down to the other deck.

At the bottom, there’s a great mini Macau Tower made out of Legos. There was a display of artwork including one of Bruce Lee.

We took a taxi to Macau’s Fisherman’s Wharf.  We walked around and saw different cool buildings. 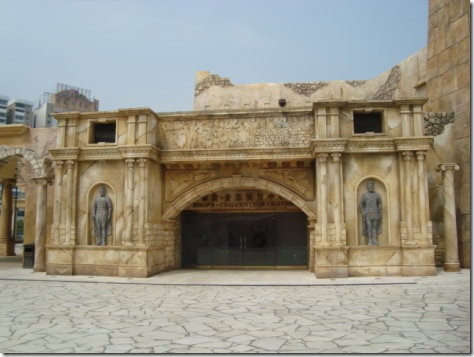 It contained mostly shops and restaurants.  The place is really big but there was barely any people around.  We had lunch at a place called Lulala.  It was a great place since there were trees outside and a few monkeys. 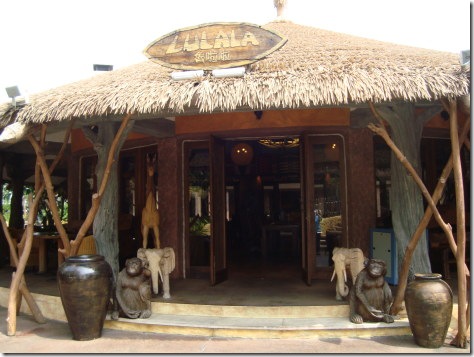 I got to eat a great banana and chicken dish.  Ivan and Jennifer had a semi-buffet inside.  Jennifer was glad to be inside since it was so hot and humid outside. Ivan saw the arcade and we ventured inside. Ivan and Jennifer played air hockey and a racing game. They’re both very competitive at video games.

We headed back to the hostel to relax. We were going to dress up and have dinner at the Venetian hotel. 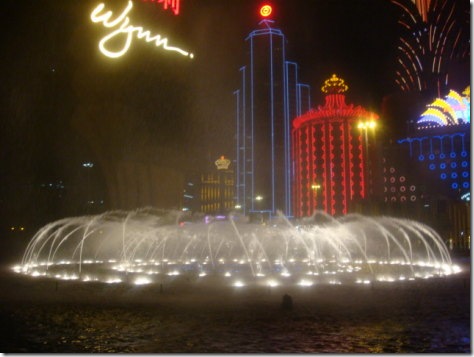 We went to check out a few fountain shows at the Wynn first.  They’re so amazing!!

We walked to the Sands. There we picked up a shuttle and it took us to the Venetian on the Cotai Strip. The Venetian Hotel is much bigger than the one in Las Vegas. It has 3 canals. 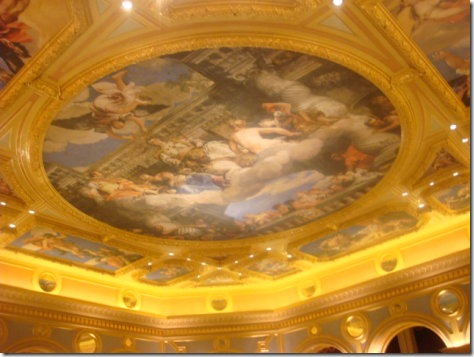 Ivan, Jennifer and I walked around the Grand Canal Shops looking for a place for dinner. A few restaurants looked good. We saw the 3 Monkeys and had to eat here. The restaurant had a variety of food like Italian and Mexican cuisine. Monkeys were seated at a few tables in the restaurant. I made a new monkey friend named Sherry. She had big red lips and was holding this cute red heart. She was a cute monkey. She’s much older than me though. She’s 12 years old. It wouldn’t have worked anyway, since I’m going to be traveling so much. Oh, also she already had a monkey boyfriend. Jennifer told me I’m too young to have a monkey girlfriend anyway. 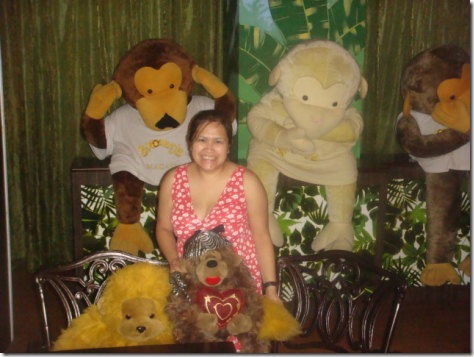 The food was good here. I had a banana pizza. Jennifer had the bolognese. Ivan had the mushroom soup and bbq chicken pizza. It was a decent meal. We walked around the shops more. The area is much more spacious than the shops in the Venetian in Las Vegas. Unfortunately, there wasn’t many people walking around. Ivan doesn’t think the area is very inviting. He also thinks the casinos don’t look too inviting from the outside. We did walk around. I stayed quiet in the backpack again since it’s only 18 years old and older in the casinos – probably not a monkey friendly zone either. Ivan and Jennifer were trying to find a nice bar. There didn’t seem to be a good one in the Venetian.
We walked to the shuttle area to go back to the Sands Hotel. There was a good bar at the Sands. It was buy one, get one free for Ladies’ Night. They thought the drinks had great flavors. I was enjoying my banana shake. We were watching Shakira in concert on the big screen tv. There was a band on but they weren’t too good. They sang a few love songs. Ivan mentioned that Chinese people loved love ballads. Jennifer didn’t know that at all. We left after a few drinks.

We checked out of the Auguster’s Lodge on October 15, 2008. We walked to the ferry station. We left around 2 pm for the boat ride to Shenzhen. It was about an hour and 20 minutes ride. We arrived in Shenzhen. Then we got the train to Guilin at 6pm. Jennifer has never ridden a train before. 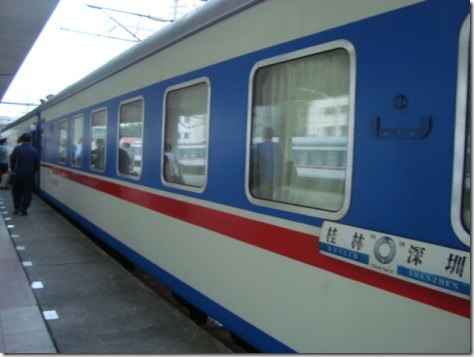 So, she thinks of Harry Potter and anime when train rides comes to her mind. The train ride is 12 1/2 hours. We got a hard sleeper which has six beds in one section. So, there’s 3 beds on each side. Jennifer got the bottom bunk and Ivan got the middle one. The top bed is really high and takes some effort to get up to. A lady comes around and collects our ticket and gives us a card with our car number 15 and the section of your bed. She put our tickets in a black folder with the other tickets she received. Our section had bathrooms containing squat toilets inside. Ivan went to explore the train cars. 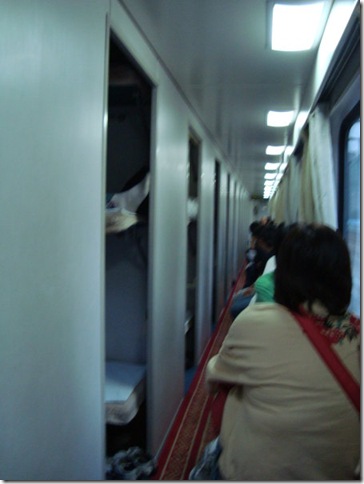 There’s a restaurant and a bar towards the middle of the cars. There’s better beds that have four beds instead. Also, there’s even better accommodation with two beds. Of course, these beds cost more. These areas have silver Western style toilets in their bathrooms. I was busy working on a blog post. Shortly after Ivan returned, we walked to the restaurant for some dinner. I just ate a few bananas. Ivan was having a problem since the vegetable dish wasn’t available. He asked what the fried chicken cube was. But, the server spoke no English. We were picturing a chicken shaped in a cube. Ivan decided to give it a go since the options were limited. Jennifer ordered the Fried Beef. Jennifer said her dish was pretty tasteless. Ivan’s was spicy, but not too good. It was actually chicken and rice. Ivan and Jennifer played some Mario Cart on the Nintendo DS’s for a short while. We walked back to the beds. We all talked for a little while. The train was expected to arrive around 6:30 am. So, we decided that we should try to sleep. It was a bit noisy on the train. The beds are really small. It comes with a nice comforter (duvet) and a pillow. Jennifer popped in her earplugs and went to bed. Ivan went to bed as well. He didn’t sleep too good though. There was a bar on his bed since it was in the middle section. He’s over 6 feet tall so the bed was too small for him. They both woke up around 12:30 am. Ivan and Jen talked for a bit. They both couldn’t sleep. They were going to try to sleep some more.

A lady woke Jennifer up around 6:15 am on October 16, 2008. She had no clue what was going on. She had been dreaming until she was woken up in Chinese. The lady wanted the card back in exchange for the train ticket. Ivan didn’t know what the purpose was of the card that was exchanged. I woke up shortly from a nice dream about running around a field covered with bananas. The train came to a stop a little after 6:30 am in Guilin. We all walked out of the train station. A guy started talking to us. Ivan showed him the map on the computer of where our hotel was. It was called Guilin Oasis Inn. The guy said he would do it for 20. Ivan said no. He walked to a cab and said he wanted him to use the meter. The guy and his other cab friends started laughing when they heard the word meter. Jennifer noticed that the guy had really long fingernails. They were like an inch past the nail bed. I think human women seem to notice more things than human men.  We walked away when he said he wouldn’t use the meter. Then, finally he gave in. Ivan and Jennifer put the bags in the trunk. We got in the backseat. A lady hopped in the front seat with this young guy. We were off to the Oasis Inn. It turned out that the lady named Lu was a tour guide. She was trying to sell us different tours in Guilin. She seemed to have our day planned out for us. Ivan knew that we were going to do a few things on the list, but not through her. We were all tired and knew we wouldn’t be doing a tour in an hour. We drove around. It seemed like the guy was just going the long way to the hotel. Ivan said it wasn’t easy to find. The guy seemed to be frustrated and he looked like he was going to cry. Both Lu and the young guy were trying to find the hotel. Finally, we found it. The cab fare turned out to be 8. So, Ivan was definitely smart for insisting that he use the meter. Lu walked us to the Guilin Oasis Inn. We checked in and then the owner Joe walked us to our room. Jennifer was happy to walk in to a big room with two beds. It was a great room compared to the rooms at the guesthouses in the Chungking Mansions. There was even a bathtub and a Western style toilet. 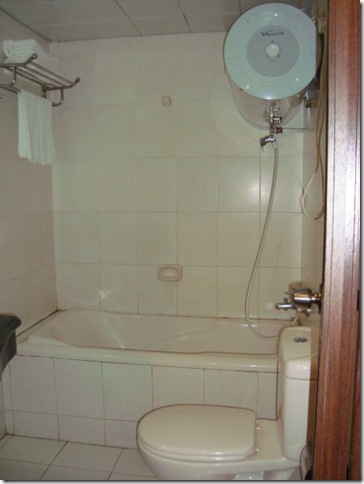 Ivan and Jennifer were happy. I was happy to hear there were stalls with a variety of bananas near by.  They had a nice American Breakfast. It came with an egg omelet with ham, bacon or sausage. They both seemed to enjoy the meal. Ivan doesn’t eat meat so his omelet was bigger.  I had a nice banana pancake.  We were all very tired so we took a nap.

We were going to Yaoshan Hill Park.  Ms. Jeannie, who works at the Oasis Inn, was going to accompany us.  She speaks decent English.  It was good to have her around since she speaks Chinese as well.  She’s a friendly girl.  She actually taught herself English.  The Yaoshan Hill has cable cars which takes you up the mountain.  It has some good scenery. 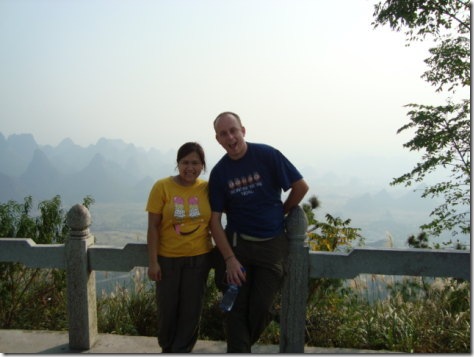 We went all the way up and then walked around.  Then we went half way down the mountain.  We got into the toboggans. 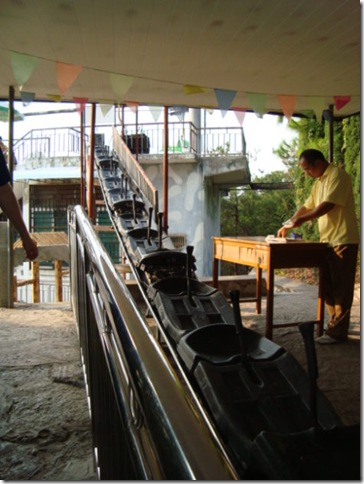 I was riding with Ivan.  I asked if they had smaller monkey toboggans.  But, sadly they didn’t.  I wanted to drive it myself!  Ivan and I went first.  The driver gets to control the toboggan by going forward or slowing down.  Ivan went so fast!  Jennifer and then Jeannie were in their own cars.

Jennifer on the toboggan

They were going a lot slower.  We had fun at the park.  I wanted to ride the toboggan again!

At nighttime, we walked around Guilin.

We were in search for a restaurant called Rosemary’s.  The pizza was alright.  The dumb waitress got Ivan’s order wrong.  She thought he said chili beef pizza not tuna steak pizza.  Of course Ivan wouldn’t order beef since he’s vegetarian.  There’s a Night Market in the middle of the street where the center of Guilin.  We walked back to Oasis Inn to catch some shuteye.