We all woke up on October 4, 2008. It was time to check out of the Marriott Courtyard. I watched while they both packed everything up in the room. I packed up my monkey bag too, and made sure that I didn’t leave any bananas behind. Ivan, Jennifer and I went to a couchsurfer’s house in Kowloon East. We were on the MTR (subway) forever to get there. Jennifer had her big ol’ backpack on the whole time. She thinks it’s a bit hard trying to put it back on. I think she’s trying to get used to the weight. I’m sure it feels like a big brick on her back. Sid invited us to meet him for dinner that night. He was going to meet a friend at the mall. We all relaxed in Sid’s apartment while he went out. We went to dinner at the Fruit Stand which is in the mall. It’s a vegetarian restaurant. Sid’s also vegetarian like Ivan. We met Sid’s friends Scott (an American guy) and Grace (a Chinese girl). It was a good time. Jennifer got a chicken steak entree with garlic sauce. She thought it didn’t have much flavor. I got sauteed bananas with a garlic sauce. Pretty good. Next, we headed to the UA Cinema to see if there was anything good playing. The theatre only plays certain movies in English. Eagle Eye was playing in about 20 minutes. Ivan was hungry and wanted to get a snack. We stopped by a place called Super Sandwich. Ivan picked out a banana, peanut butter and chicken wrap – yes that is really true! He shared some with me and Jennifer in the theatre. It was a weird combination, but anything with banana in it, is fine by me. Jennifer said she couldn’t taste the peanut butter. It was a good action packed movie.

We went with Sid to a vegetarian restaurant on October 5, 2008 for lunch. We walked around to the markets to do some shopping in Mong Kok. I liked the Goldfish Market. It had lots of different fish you could buy. 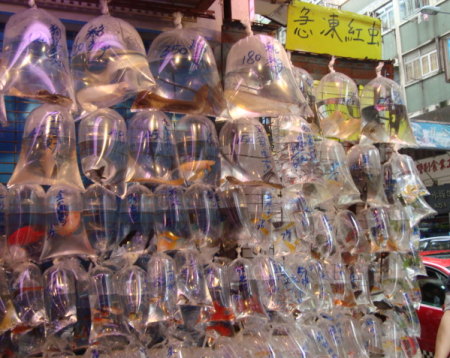 Most of them were in plastic bags just ready to be purchased. The Bird Garden was nice too. There was so many birds in cages. 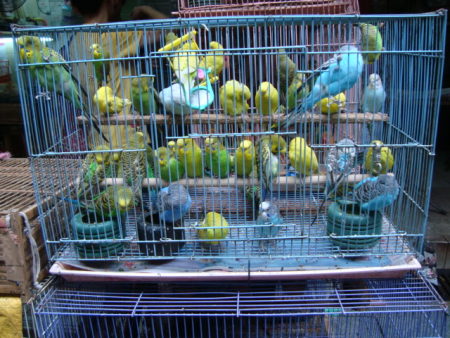 It smelled weird in the garden area. We went inside a few places that were selling dogs. I really wanted to hop on one of the dogs’ backs and ride it. But, Jennifer said they wouldn’t let me. I used to ride Max (the wolf) back in Las Vegas. He didn’t seem to mind. Ivan and Jennifer thought the dogs were so cute. It was raining off and on all day. We were looking for some deals in the Ladies Market. They bought a few cool t-shirts. There’s a lot of t-shirts with monkeys on them. It started raining really bad. Ivan was searching for a umbrella for sale. We kept staying in certain outside shops since the area is covered. I can’t believe it was raining so hard. It wasn’t any fun. Ivan found a big umbrella at 7-11. We walked further on. Ivan bought a small umbrella for Jennifer. I didn’t see any monkey umbrellas for sale. I stayed nice and dry in Jennifer’s daypack. Ivan wanted to find this vegetarian restaurant for dinner. We had dinner at the Light Vegetarian Restaurant. It had vegetarian dim sum for dinner. Usually dim sum in Hong Kong stops before dinner. The food was really good. Unfortunately, the service was really slow. They would bring you two dishes or even one at a time. Then it took forever for the next entree to arrive. Ivan was getting a bit peeved. I did have a great banana dim sum. The rain had pretty much stopped. We took the MTR back to Sid’s place in Kowloon.

We left Sid’s place in the afternoon on October 6, 2008. We went to Causeway Bay and headed to Times Square. It’s a 10 story shopping mall. Ivan wanted to check out the Northface store there. 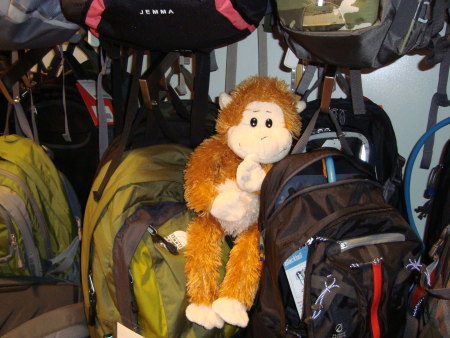 Hiding Out in the Backpacks

His old Berghaus backpack had a hole in it. He found a nice blue backpack. We went to meet the couchsurfer Michael. We would be staying at his house for a few nights. He walked us to his apartment. His place doesn’t have an elevator. He’s on the top floor. So, Ivan and Jennifer had to climb up 10 floors with their heavy backpacks on. That was tiring! Michael had cold beers for Ivan and Jennifer when they reached the rooftop, and some cold banana juice for me. The rooftop has a great view of the city. It also has a table with chairs, so you can sit outside and chill. Ivan, Jennifer and Michael talked for a little while. Michael recommended a few good restaurants. He said the mango pancakes were great. I did enquire as to whether there were any decent banana pancake shops nearby but I was told that no, its just mangoes. I think the chinese need to be educated on the deliciousness of banana pancakes! Michael left to go meet his dad. He was in town for business. Jennifer worked on the blog for a little while. Ivan was getting hungry. I stayed in. Ivan and Jennifer went walking around to find a restaurant for dinner. They decided for the Japanese restaurant that had an English menu. The people who worked there didn’t speak any English though. They wanted to try the mango pancakes. The dessert place was really crowded. Ivan just went inside and they got some seats. The mango pancakes were basically mangos and cream in a pancake. They enjoyed it. They walked around the area a little. The bars didn’t really interest them. They did play a fighting arcade game. They decided to head back to Michael’s place to rest. I decided to sleep on the roofop under the stars all by my little monkey self.